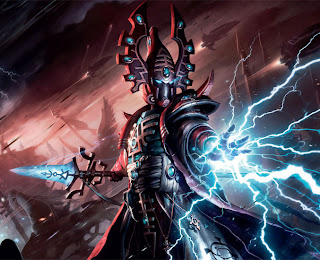 Games Workshop seem intent on releasing a new book a month at the moment. With the last one being High Elves it's still only been a couple of months since the Tau book hit. Perhaps that's why I've only come away from my FLGS with the book (and some psychic cards). Don't get me wrong, all of the new models are pretty stunning, it's just with Tau still warm from the presses I just can't justify a new army at the moment.

My plan then is to get a feel for the codex by writing my usual unit reviews and hopefully target my purchases on things I'll actually use on the table top instead of what looks cool. I'm also planning on sorting through my existing collection and getting a lot of stuff up on eBay to try and fund the Eldar project. This is all fine in theory but I'm sure I'll end up caving at some point and buying one of everything!

Anyway, onto the new book. First things first, as with all of the new books so far it's beautifully made. I've almost totally forgotten that these books used to be £20 as the quality of these hardback versions is stunning. Granted the summary pages are still in danger of getting bent but otherwise I can't fault their looks. The cover of the new book is far and away the most stunning of the lot. As I said earlier, I really wish GW would release this artwork in poster format. Otherwise the book follows the same 104-page format we've begun to get used to now. The most notable difference here is that the "Wargear" section is decidely smaller. There's only a special issue and vehicle upgrades section.

You might think then that this book is easier to get your head around but if anything I find myself flicking between pages even more than normal. Units don't have many upgrade options but there are very few common wargear items (hence the lack of chart) meaning that comparing units is going to be tricky. The summary page isn't comprehensive either. The other thing that strikes you is that, probably more than any other army, Eldar have tons of options in each and every FOC slot. Like the Tau book before it there doesn't seem to be any automatic choices and the number of different, viable, combinations is likely to be high.

So then, what are the key things to look forward to as an Eldar general (if I decide to become one again)? Pretty much everything in the book has a minor drawback when facing Slaanesh in that fear tests are at -1 Ld. The big thing is that a lot of units have Battle Focus which is the much talked about Run-Shoot/Shoot-Run rule. This makes shooty Eldar armies incredibly mobile. With objective games making up 5 out of 6 missions the ability to move towards an objective as fast as possible, whilst still firing on the unit currently controlling it, is going to be great.

Elsewhere the Warlord Traits are pretty much excellent. Adding +1" to Run moves sounds like the weakest but when you're R-S/S-Ring then it could make a big difference. It's worth noting that none of the traits have army wide effects though.

Psychic powers look interesting. The warlock powers are all dual use meaning that they mostly give the option of using a Blessing or a Malediction depending on what the situation requires. The primaris warlock power can give units Shrouded which combined with Jetbike cover saves could make for some pretty sturdy troops. The farseer powers are pretty similar to the previous book but have mostly improved. Eldritch Storm for example is Fleshbane & Haywire meaning S3 isn't such a big deal. Mind War can hamper the Farseer himself but otherwise is still good. There are other changes that I'll get onto in the specific post about seers but the big thing is Runes of Warding. In the previous book it was probably the most potent psychic defence. Sadly now it's reduced to a one use 2+ deny the witch.

Other notable changes are expensive Fire Dragons (with 3+ saves now), Autarchs still allowing Reserves manipulation (great for flyers), expensive but sturdy wave serpents, interesting changes to some of the aspect warriors and probably the best anti-flyer flyer of the recent books.

Finally, the (quite literally) big thing everyone is excited about is the wraithknight. He's pretty expensive on both the wallet and the points but with that statline it's hard to resist having one (or maybe two) in an army. Still not sure what the best loadout is but keeping cost down is going to be tricky.

Stay tuned for more detailed reviews of each FOC slot. Some (if not all) will probably require more than one post but hopefully you'll find my thoughts interesting and useful.
Posted by From The Fang at 17:00:00