Onto the Elites section then. There's 6 units to cover here and with the exception of the Harlequins they can all take a Wave Serpent which as I've already discussed is pretty deadly.

Howling Banshees
Always pretty weak in the old codex, Howling Banshees may be slightly cheaper but they're still a waste of points in my opinion. On the face of it some fast moving I5 power weapons seem great but with S3 and Doom being less likely they're perhaps slightly weaker than they were before. With only a 4+ save they really suffer from not having an assault vehicle and for that reason they won't leave the shelf. 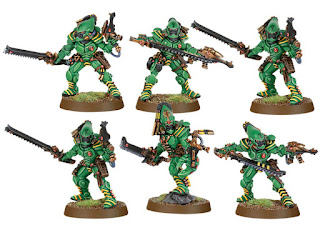 Whilst still an assault unit in a shooty world, Striking Scorpions have a couple of benefits over their female cousins. Firstly their S4 which means they don't rely on Doom so much. They also gain an extra S3 attack at I10 thanks to mandiblasters. Granted this isn't as good as the extra S4 attack they used to get but it's at I10 so against some opponents it's better. The other advantage they have over the banshees is that they carry grenades. Nothing like wasting high initiative by charging a target in terrain.

Having a 3+ save, Move Through Cover, Stealth and Infiltrate means it's probably easier to get scorpions in to combat despite them being slightly slower than banshees. I can see a place for them, especially with an exarch with initiative 6 power fist for challenges but realistically they're going to get overlooked.

Fire Dragons
A whopping 22pts each but with 3+ armour saves. They're still doing what they did before which is worry both terminators and vehicles alike. However, they're still pretty vulnerable and have always been a bit of a glass cannon. Personally I think 110pts is quite a lot to risk for what is often a one-shot wonder. Of course you might take out a unit worth three times that but it still feels like a waste.

People will still take them of course as they're by far the best unit for dealing with 2+ saves or AV14 in the book. Personally I think you're better relying on weight of fire forcing some failed saves.

Harlequins
For the most part they're the same as the Dark Eldar codex version. However, the big change is that their crucial Veil of Tears special rule is now a psychic power cast by a single wound Ld9 psyker. There's a fairly good chance of failing the test and with a single wound you're going to fear Perils even if it is a 1 in 18 chance. Otherwise they're the same thing they always were, some will love them, others won't go anywhere near them. Frankly I've never much liked the models and the unit works out pretty expensive when tooled up. 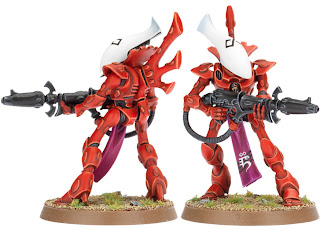 The big news for these guys is that they're a lot nicer on the wallet than they used to be. Being able to actually afford a unit of these is a big deal. I always wanted some in my old Eldar list but could never justify the expense. They've lost their irritating Wraithsight rule which is great and their wraithcannons are still good if a little short on range. That being said I wouldn't want to put a daemon prince anywhere near them with S10 AP2. There's the interesting option of D-scythes too which are essentially AP2 flamers but with the Distort rule. They're pretty expensive at an additional 50pts onto an already costly unit but they'll really shine when it comes to Overwatch. Would you really want to charge a unit that does approximately 10 S4 AP2 hits on you as you charge in?

They'll require a spiritseer to become troops but 70pts is a small tax to pay for the move. They come into their own when combined with other wraith constructs. Having a list with wraithguard, wraithlords and wraithknights is a tempting prospect. Sure the model count will be low but you're not going to be making many saves against a lot of armies. Stick 5 of them in a wave serpent and you're golden. They probably offer one of the cheapest (money-wise) builds too. 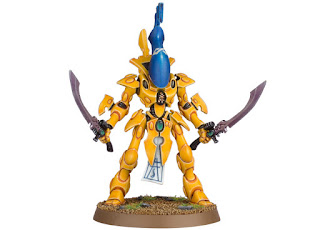 Sharing the same stats and cost as their shooty cousins the wraithblades would worry a lot of things in combat. Swapping out their swords to gain AP2 and a 4++ save is a decent option but again they're an assaulting unit which already puts them on the back foot in the game as it is at the moment. They may look cooler than the gun-toting version but I think most kits will be built with guns rather than swords/axes.

Conclusion
The elites section is certainly one of the weaker areas of the codex once you move wraithguard and wraithblades to the troops section with a spiritseer. The models have always been some of the nicest but for the most part I can't see the units themselves getting much use. Scorpions aren't bad but in a shooting game they're probably getting left on the shelf. Let's not forget that these models are also pretty expensive and Finecast so people will be put off anyway.

The reduced monetary cost of wraithguard/wraithblades means we'll see a lot more of them. I'm tending to think they're a bit too pricey and reduce the number of models in your army too much but they're far from a bad choice.

Next up we're onto Fast Attack and Eldar's only real anti-air option.
Posted by From The Fang at 17:00:00