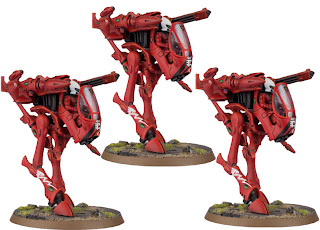 War Walker Squadron
If the wave serpent is the stand out unit of the codex then War Walkers are a close second. In the old book they were widely used as a means of bringing a disgusting amount of fire power to a flank near you. In the new book their role is the same but that fire power is much better. Whilst they may struggle from the lack of Fortune they've massively benefitted from the guardian BS/WS and initiative boosts. The changes actually make them fairly decent in combat but obviously it's shooting that they excel at.

For the bargain price of 70pts you get two scatter lasers. It gave me a headache when I tried to read the laser-lock rules to figure out whether you can use one to twin-link the other but let's assume you can't. Even without you're still firing 8 shots and over a typical unit of 3 you're getting 4 more hits than you did with BS3. That's already something to be excited about if you've got a pile of these on your shelf but wait there's more.

Battle Focus applies to war walkers too and somehow they've got Fleet too. That means Outlfank, unleash 24 S6 shots and then run or, if you find yourself on the wrong flank, run to hopefully put yourself in range. Not only that but Kelly in his infinite wisdom decided to give them a 5++ save too! Not a cover save like a skimmer but a genuine invulnerable save. Seriously that's insane. Whilst I think Fire Prisms are great, I can see people filling their heavy slots with 3x3 war walkers.

There's an argument for combining a scatter laser with a shuriken cannon. That way you definitely get the Laser Lock bonus. A twin-linked shuriken cannon will score pretty much the same number of hits that a scatter laser would. Whilst it may have shorter range, Outflanking helps and it's a worthwhile sacrifice to gain Bladestorm. It also brings the squad in at 195pts which is incredibly cheap. 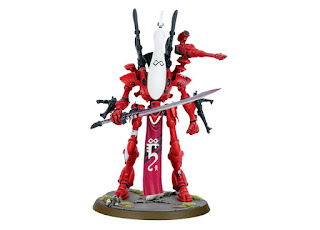 Most will overlook the wraithlord as he's quite literally dwarfed by the wraithknight. Conveniently though he may have half the wounds but he costs half the points. It's also a hell of a lot easier to get him a 25% coverage. He can also make the most of his S8 AP2 by challenging enemy characters. However, I'm not sure that's a worthwhile trade off for losing S10, Jump, I5 and an attack. The problem with wraithlords in 5th and early 6th is still present in that they either sit back and shoot or struggle to get forward quick enough to get into combat.

If you're leaving them back shooting then you're probably better with another unit. However, in combination with their bigger brother, a couple of wraithlords can still be effective. Send the wraithknight forward to draw all the attention. Meanwhile a couple of his mates are advancing and you've still got some T8 models to try and shift. Great for a ghost themed list but most will overlook them. 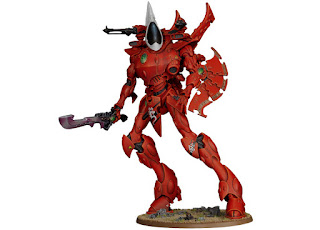 As seems to be the trend in recent times, the big excitement about the codex was the huge model. Easily bigger than anything else in standard 40K (including a lot of scenery!) the wraithknight is certainly going to attract some attention. It's a gorgeous model (although I wasn't sure at first) that will look truly epic on the field. It's got a strong statline but BS/WS 4 lets it down somewhat.

There are essentially two viable builds. The vanilla model has its S10 wraithcannons which will be feared by vehicles and daemon princes alike. All the while you're jumping him forward to get into combat and make the most of his S10. The suncannon and shield provide more durability and excellent anti-MEQ firepower. It's a shame it didn't get Barrage though and costing a whopping 40pts I'm not wholly convinced it's worth it. The shield and sword whilst visually appealing aren't worth bothering with. You're essentially forced to pay out another 30pts to give him some firepower and the only benefit is a 5++ save as the master-crafted weapon isn't worth it as you can't be S11 anyway!

There's some debate going about how durable the wraithknight is. Most are saying that with an armour save of 3+ it'll die far too easily. Think for a minute about T6 models in the game at the moment such as the dreadknight. Having fielded two at the doubles we know from first hand experience that some armies simply can't take them out fast enough. The wraithknight may not have the 30" shunt but is otherwise as mobile as a dreadknight. The dreadknight can be torrented down by guardsmen though. The wraightknight with T8 can totally ignore anything below S5. Even S5 and S6 weapons need 6s to wound. You'd need on average 27 BS4 S6 AP4+ shots to cause a single wound and he has 6 of them!

Look at your current army list and think about how much of your firepower is useless against it. In combat how many models are S5 or above? Sure some units can use "Our Weapons Are Useless" but that's still making them run and risking Sweeping Advance.

Of course there's always Poisoned, Force and heavy weapons. With Dark Eldar dropping massively in popularity how much ranged poisoned weaponry is there? Force weapons are normally wielded by S4 models making them useless and if you're firing heavy weapons at my wraithknight then you're ignoring my tanks. He might not be incredibly deadly but for the same cost as a land raider you're getting something which is a lot harder to take down. As with every big new unit, the internet looks at it and goes "looks great but it'll die to poisoned fire so it's not worth it". That logic is like saying "there's no point taking rock because paper exists". You can have a hell of a lot of fun smashing up scissors though.

Conclusion
This brings to an end my Eldar codex review and from what at first glanced seemed to be a mediocre book we're now talking about the latest powerhouse of 40K. Tau are meant to have the monopoly on shooting but with most of their weaponry coming in at S5 they're going to struggle to compete with Eldar. There are soo many places to find S6 weaponry at BS4 that even before psychic help the Eldar army can shoot others off the table. Eldar are the new Necrons in terms of invincible volumes of fire. Sure they don't have the flyers in droves but show me an army that can reliably deal with 6 wave serpents and 9 war walkers at 1,850pts!

There are several viable builds for Eldar too. Whether you want to field hordes of guardians, elite armies with T6 as minimum and some horrible big S8 constructs or mech spam with disgusting amounts of S6 fire. In some ways I find their power off putting. The competitive players will be all over the book and spamming the best things but if and when I eventually build up my Eldar army I'll be trying to do something more interesting but hopefully still effective.

At the end of the day, GW have done a similar thing to the Eldar book that they did with Tau. There are no huge changes. There's a scattering of new units and the existing units on the whole are better and cheaper. Die hard Eldar players will be pointing out that the old codex was capable of similar feats but this new book has taken that to a new level.
Posted by From The Fang at 17:00:00