This is the bit I look forward to the most. Heading down to my FLGS (Wargames Emporium in Sheffield - 20% off GW prices) and drop a pile of items on the counter. So here we have it, the prize haul for Blog Wars 5. Just by showing up you're entitled to win one of these prizes! The smaller prizes you can see at the front are spot prizes (more on them in a bit) whereas the bigger boxes of stuff and the codices are going into the raffle. Remember the raffle is included in your ticket cost! 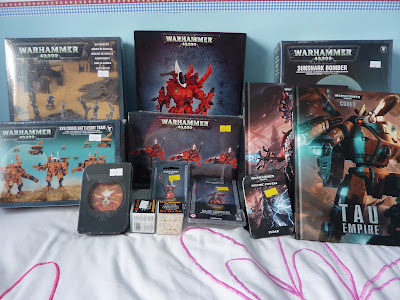 Spot Prizes
In each round there are two spot prizes available. There are two types Booby Prizes and "I want 5th Edition Back" prizes. The booby prizes are awarded to the first player in a round to do something particularly bad to his own army! As compensation he'll pick up one of the spot prizes which will be very loosely related to the cock up.

The "I want 5th Edition Back" prizes will be awarded to players who have something happen to them that simply wouldn't have been possible in the previous version of the rules. You'll have to wait until the day to find out what they are though.

These prizes will be up for grabs during all three rounds so keep an eye on the big screen to see how you can win them and then all you need to do is remember to claim them.

On offer are:
Raffle Prizes
These prizes will be on offer at the end of the day as part of the prize ceremony. Once again, there's no need to buy a ticket you're already in the draw. The name of everyone who's there will go into a hat and will be drawn out at random. Obviously there's prizes there that will be more use to some than others but there's always eBay and bear in mind that each prize is worth more than your ticket cost to buy!!

I think that's pretty good prize support even if I do say so myself!

Gaming Tables at the Venue
Darren from Marauder (who run the NWGC) has sent me over some shots of the tables. The scenery looks pretty decent and they're themed to different enviroments which is always nice. I'll be getting there early on the day to make sure the terrain looks even but as I say in the event pack if you want to move things round a bit let me know. Anyway here's the shots:


I also reckon those chairs look a lot more comfortable than the usual offerings at tournaments! Hopefully it's going to be a great venue for us. I'll be trying to get some feedback from people afterwards so that we can decide if it will be the new home for Blog Wars. It's worth mentioning that they'll be offering breakfast (not included in your ticket) to those who get there a bit early.

Later in the week I'll be putting up my army lists and some shots of the hopefully finished models (to a gaming standard anyway). Otherwise, see you all on Saturday!
Posted by From The Fang at 17:00:00