Back to Matt's Blood Angels codex review and onto the Heavy Support section. Often the Stormraven was the only Heavy unit that BA players ran in the old book. Let's see if the new book has changed anything. 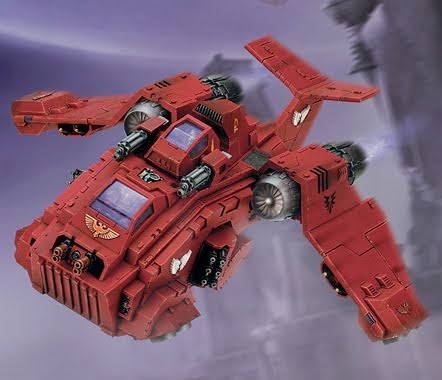 Stormraven Gunship
I've already talked about this quite a bit. This is the only option for anti air in the codex and it's pretty solid as it's always been. The main problem I have with it is that it costs 200 points and whenever I use it the thing doesn't arrive until turn 4! It just makes me think that I'd rather have more points on the table turn 1. The fact it's an Assault Vehicle is also great for Blood Angels, especially since it can carry dreadnoughts, but that makes the "points off the table" problem even worse. Of course there are options within this codex and other allied codices that improve the odds of it arriving, so if used in conjunction with those then I would say that it's a pretty solid choice with or without passengers.

Baal Predator
These used to be a popular choice with flamestorm cannons and heavy flamer sponsons. This setup still isn't bad as the Baal Predator is a fast vehicle as standard and so it is quite easy to get it close enough to the enemy to unleash the templates, however there are a couple of reasons why this setup won't be as popular as it once was. Firstly there just aren't as many 3+ armour squads around, with the ability to now tank a 2+ character onto the front of squads the flamestorm cannon just isn't as dangerous as it used to be. Secondly the changes to vehicle damage now means that many squads can take down vehicles in close combat by glancing them to death which means that getting your Baal Predator up close to the enemy's lines probably isn't a good idea. Finally, it would have been nice to have the Scout special rule on this tank, that would have allowed it to perform the outflank flame attacks that I always used to do with it back in 5th edition. 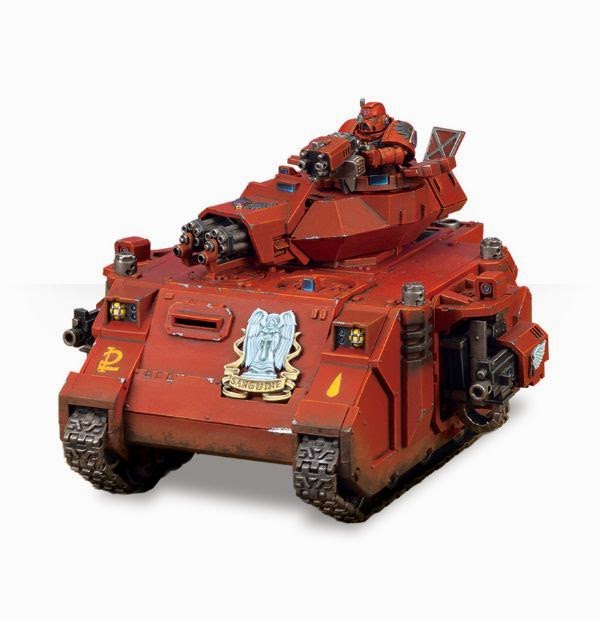 So considering all that it is probably a much better idea to load it out with an assault cannon and heavy bolters. This way it will have 6 heavy bolter shots and 4 twin linked assault cannon shots even when moving 6", while only losing the ability to fire one gun when moving 12" (and snap firing the other - ed.). This gives you a very effective infantry killing vehicle with the ability to take out light and even heavy vehicles thanks to Rending on the assault cannon (well assuming it doesn't have many hull points left at least). Also, as with the other predator chassis tanks, armour 13 on the front also goes a long way to help keep it alive long enough to cause problems for the enemy, both in terms of causing casualties, but also in capturing and holding objectives.

Predator and Vindicator
I have already discussed these when talking about overcharged engines in one of the first posts in this series. They are both solid heavy support choices due to the fast upgrade.

The Predator because it can more easily get a firing solution and fire all of its weapons, either load it out with all lascannons or with autocannon and heavy bolters (this last loadout is in some ways better than a Baal Predator as it out ranges it and is also 30 points cheaper, but when in range the Baal's firepower is better due to the assault cannon being much better than an autocannon).

The Vindicator is good with overcharged engines purely because it can get enemy units in range faster and easier. A Vindicator's main weakness is its 24” range, so being able to move an extra 6” before firing helps a lot.

With the changes to vehicle damage I can see Predators and Vindicators being a lot more useful. AV13 became that bit more difficult to deal with so with enough predator hulls you could cause problems. Fast has always been a big bonus for BA tanks and makes the Vindicator a lot more viable than it is in other books. Of course, Matt hasn't talked about Whirlwinds or Land Raiders here. That's because they're the same as in the SM book and have the same advantages and disadvantages as their SM equivalents. The next post will be the last part of the review looking at Lords of War.
Posted by From The Fang at 17:00:00