It's that time of (half) year again, the army lists are all in and with the exception of a couple of queries they're all good to go. Please check your emails (and junk folders) to see if I've picked up any issues with your list but otherwise if you haven't heard from me please go ahead and assume your list is fine. As usual I've updated the BW7 page with details of who's bringing what race (I'm calling them that until we start using 7th ed at Blog Wars and I have to start saying "Factions"). Of course, information in this form is of little use to you and tricky to digest (pie pun) so I think it's only right that I throw some pie charts your way.

Before tackling the latest pie charts help yourself to a slice of tasty BW6 pies and if you're still peckish some crusty BW5 pies. Back in November there was a meaty dose of Tyranids on display along with fairly equal portions of CSM, Eldar, Wolves and Tau. 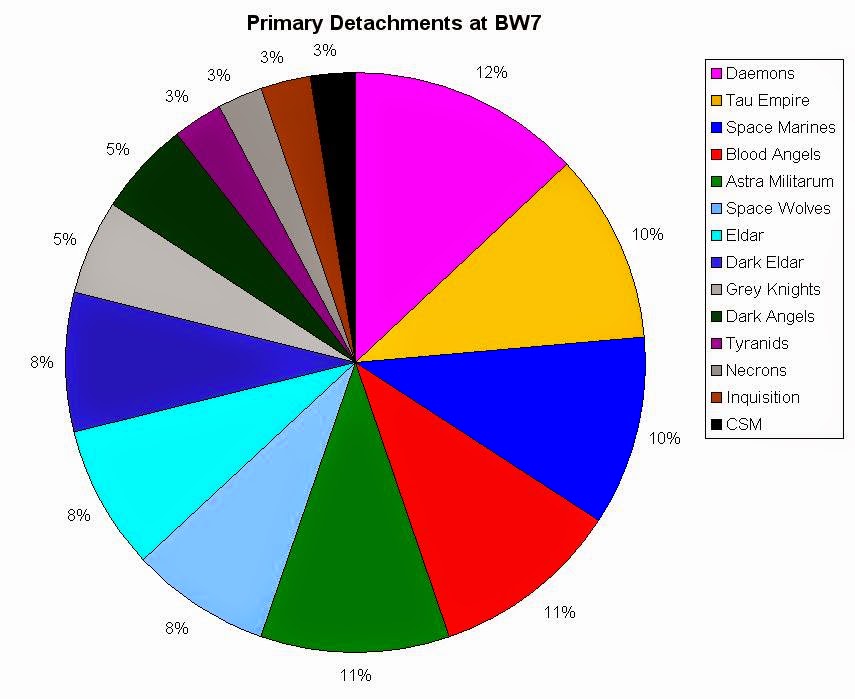 Although present at BW6, Chaos Daemons are a much bigger part of Blog Wars 7. Not suprisingly Tau are still very popular but perhaps what is surprising is that there aren't many Eldar armies. This becomes even more significant when you notice that there's actually quite a few Blood Angels players on board (4 to be precise).

The pleasing thing for me is that there's still a huge variety of different armies represented which I hope makes for a more interesting tournamet for you guys. The odds are actually against you meeting the same race twice and it's incredibly unlikely you'll meet the same one in all three of your games. I often find that makes a big difference to my enjoyment of a tournament. If I'm playing Necrons in every game then I get pretty mardy! Incidentally there's only one Necron player this time which has been the trend since BW5.

You'd expect there to be a decent number of Imperia... Astra Militarum players and indeed there's a decent chunk of them. This gets more interesting when we get to the Special Characters but worth noting here too. I'm extremely sad that in the last four Blog Wars we've only had a single Ork player. Hopefully that's about to change with the new codex but I won't hold my breath. On the other hand I'm happy to see that Space Wolves are still well represented (as this used to be a Space Wolves blog). Hopefully we'll see a new codex for them soon too. 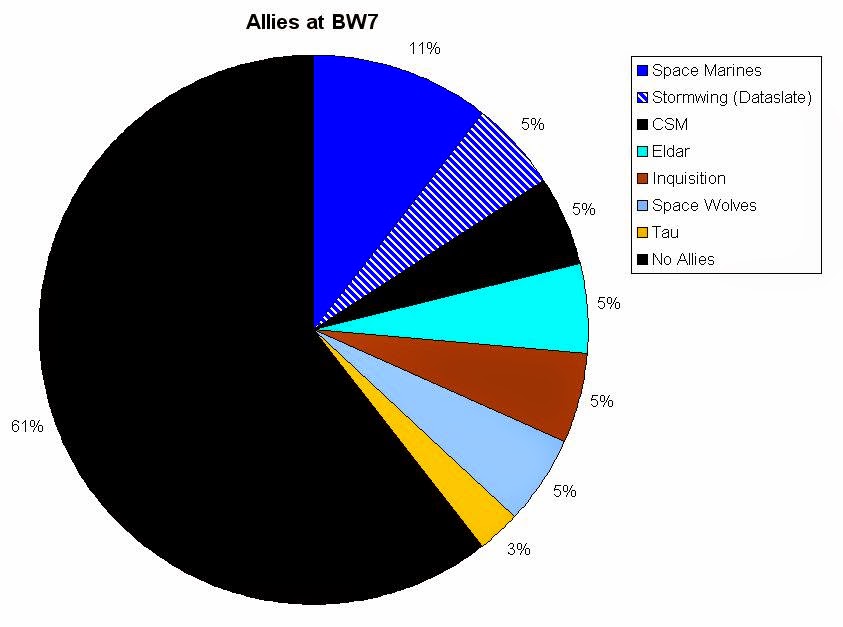 The first thing to note here is that the number of people taking allies has increased fairly dramatically. At the first Blog Wars of 6th edition (BW4) there was very little uptake of the allies system. This has steadily increased to the point we're at now with over a third of the armies including allies of some kind. Of course some of these are Inquisition and Dataslates and there's only a single Tyranid list this time but still I think it's fairly solid increase.

I make little secret of the fact that I'm not a huge fan of allies but it does make for more variety in the lists I suppose. There's a big chunk of SM allies here, especially when you take the Stormwings into account. There's a formation in one of the other armies which isn't included here (as it's the same race as the primary) but there isn't much uptake on the formations front.

No other really stands out as a popular choice for allies but for the most part at least the allies used are Battle Brothers with the primary detachment. Interesting when you consider a lot of these combinations won't be as useful in 7th edition.

Special Characters
Finally, my favourite part of Blog Wars, the special characters. For those not aware, each army MUST include one in their primary detachment so there's guaranteed to be plenty of them in attendance. Some armies have taken more than one too. Coteaz proves to be a popular choice again (helped by the Inquistion codex of course) but Knight Commander Pask is the most popular with all four AM armies including him. Expect to see a lot of Leman Russ tanks this time!! 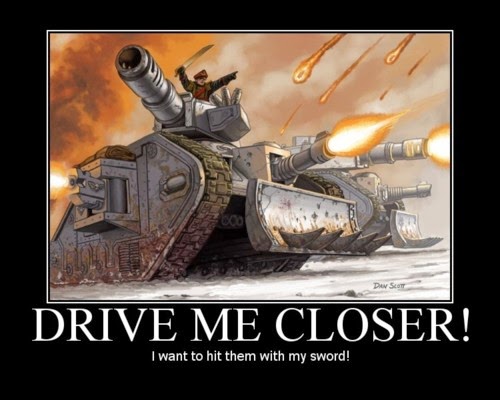 Happily though there's 29 different characters represented across the 38 lists (yes, there's been two dropouts). There's some characters I've never seen in play before like the Changeling, Ku'gath, Skarbrand and Masque from the Daemons lists. Kheradruakh is even making an appearance!

Conclusion
I have high hopes for this Blog War. There's a great mix of armies in attendance and a nice combination of veterans and new players to build the atmosphere. This is the first one I'm intentionally not playing in so I'm insanely jealous of you all getting to roll dice together. I will, of course, stand in if there's an odd number so I'll be posting up my backup list for you all to see in the coming days. I'll also be showing you what you'll be able to win both for the spot prizes and the raffle so stay tuned for that.

BW6 saw the biggest attendance yet (32) and as it stands at the moment we'll smash that with 38 players at Blog Wars 7. As ever, I'm hoping it'll be the best yet. If nothing else I hope it goes a bit more smoothly than last time!! One thing's for sure the raffle prizes are bigger than ever!!
Posted by From The Fang at 17:00:00