The seventh (!) installment of Blog Wars was held at the NWGC in Stockport yesterday. Despite being the seventh blog war the tournament was the last one of 6th edition 40K. I'm still waiting until I've played more games of 7th edition before I make any decisions about what will happen at BW8. I've some ideas of what I want to do but I don't want to commit to anything until I've played more games.

Anyway, there was a Blog Wars record of 38 players in attendance yesterday. I want to start by thanking everyone who came along for making it such an enjoyable day. The atmosphere was a friendly one which is always my intention. When new players come in you never know how what to expect but everyone seemed to play in the spirit of the event. There are still three players who've been to every single Blog Wars with no sign of any of them missing one any time soon. Maybe they'll get entry to the 10th one for free if it gets that far.

I've often thought about expanding the event as it becomes more popular but I'm keen to keep numbers relatively low so that we can keep the close-knit atmosphere. I hope this is the one thing that brings people back time and time again. That being said I may extend it to 50 players if the demand is there in November for BW8. 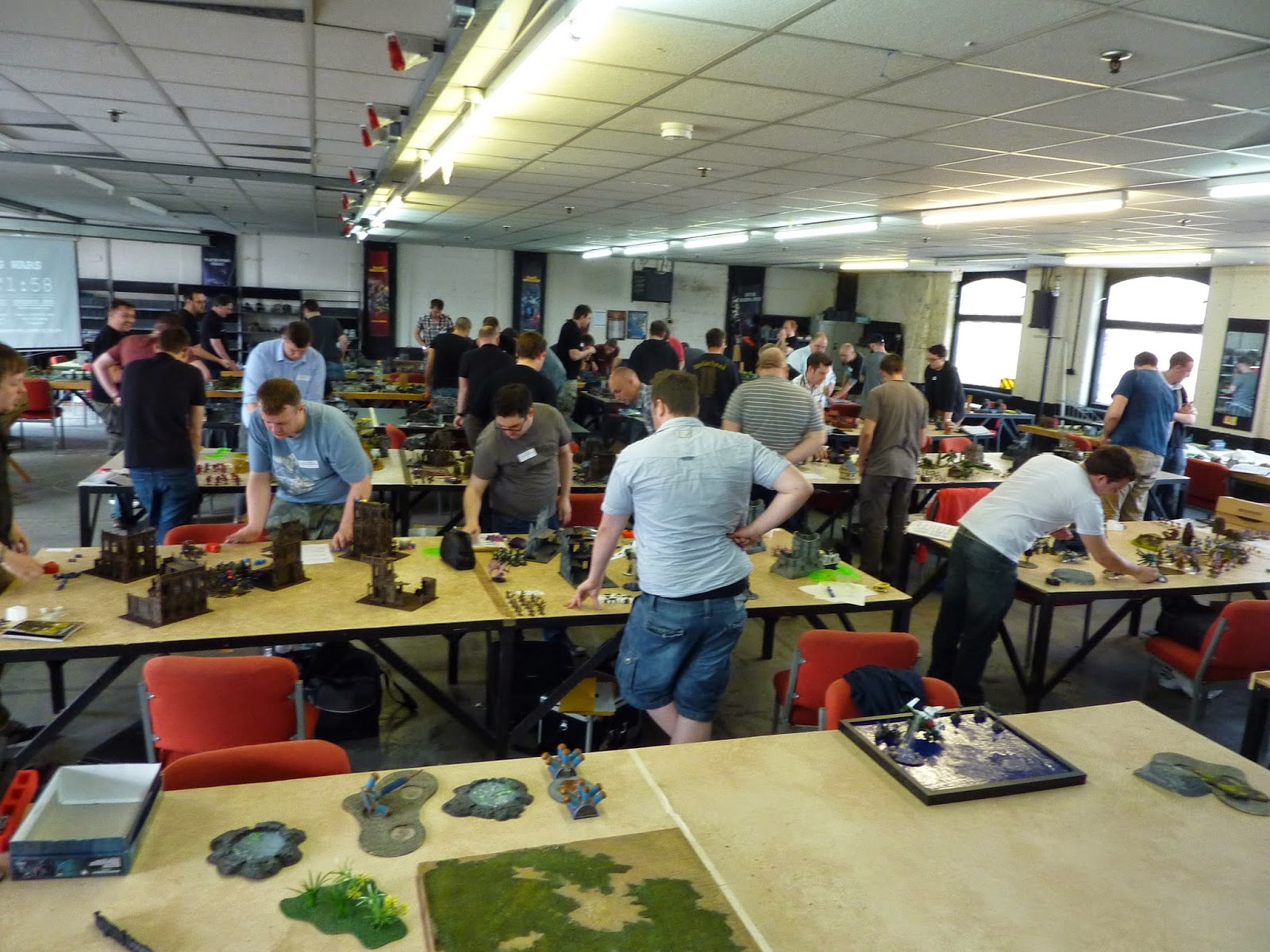 Here are this year's final results. I ducked out this time so we have a new champion in the form of Gary Percival who played White Scars. Gary was on table two in the final game and scored a whopping 29/33 points to leapfrog Matt who struggled to score enough in the final game to hold onto first place. As ever these results will be added to the archive. 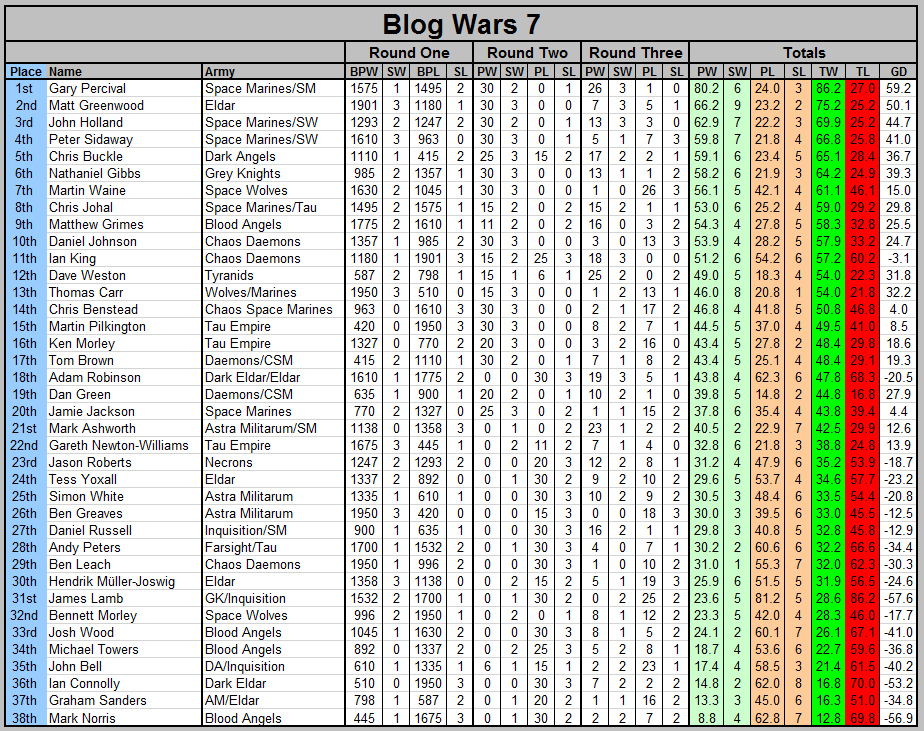 Scoring
In case you're wondering the reason the results aren't a whole number is that in the first round I use old school Blood Points as a scoring mechanism. These are then converted into tournament points but I leave the decimal place there to help me distinguish between closely matched scores. All victories are based on TP total (Primary VPs + Secondary VPs) and in the first game Gary only won his game by 0.2 TP!! I think it's great to be able to see just how decisive (or not) a victory is rather than just having a straight win/loss/draw up on the board.

I think the scoring system worked pretty well. There didn't seem to be any major issues that people came to me with but as ever I'm open to suggestions for improvements. I'll talk about the missions themselves shortly but the scoring system seemed to give a pretty good representation of what happened in the games. There was one game in round two that was won 2-1 where neither player controlled an objective and it came down to secondary VPs.

If you look at the bright green column of total points won (TW), you can see that 12/13th and 16/17th appear to be tied with and the goal difference (GD) between VPs scored and VPs lost appears the wrong way around. In actual fact Dave Weston scored 54.03 to Thomas Carr's 54.0 and Ken Morley scored 48.42 to Tom Brown's 48.38. That's incredibly close!

The Missions
I think the first mission works pretty well in that two armies basically try to smash each other in. I think it's a good way to start the day and having that round before lunch gives plenty of time for players to add up the points without it making the next round start late. The mission definitely favours some armies over others but I hope the others balance this out a little.

The second mission is interesting as your opponent's objective is worth more to you than your own. In one game this resulted in a 25-15 scoreline with neither player holding their own objective but one of them having control of the centre. As I say, there was also a game where no-one controlled anything! I think this mission prevents the boring games that Emperor's Will and Relic can sometimes create. 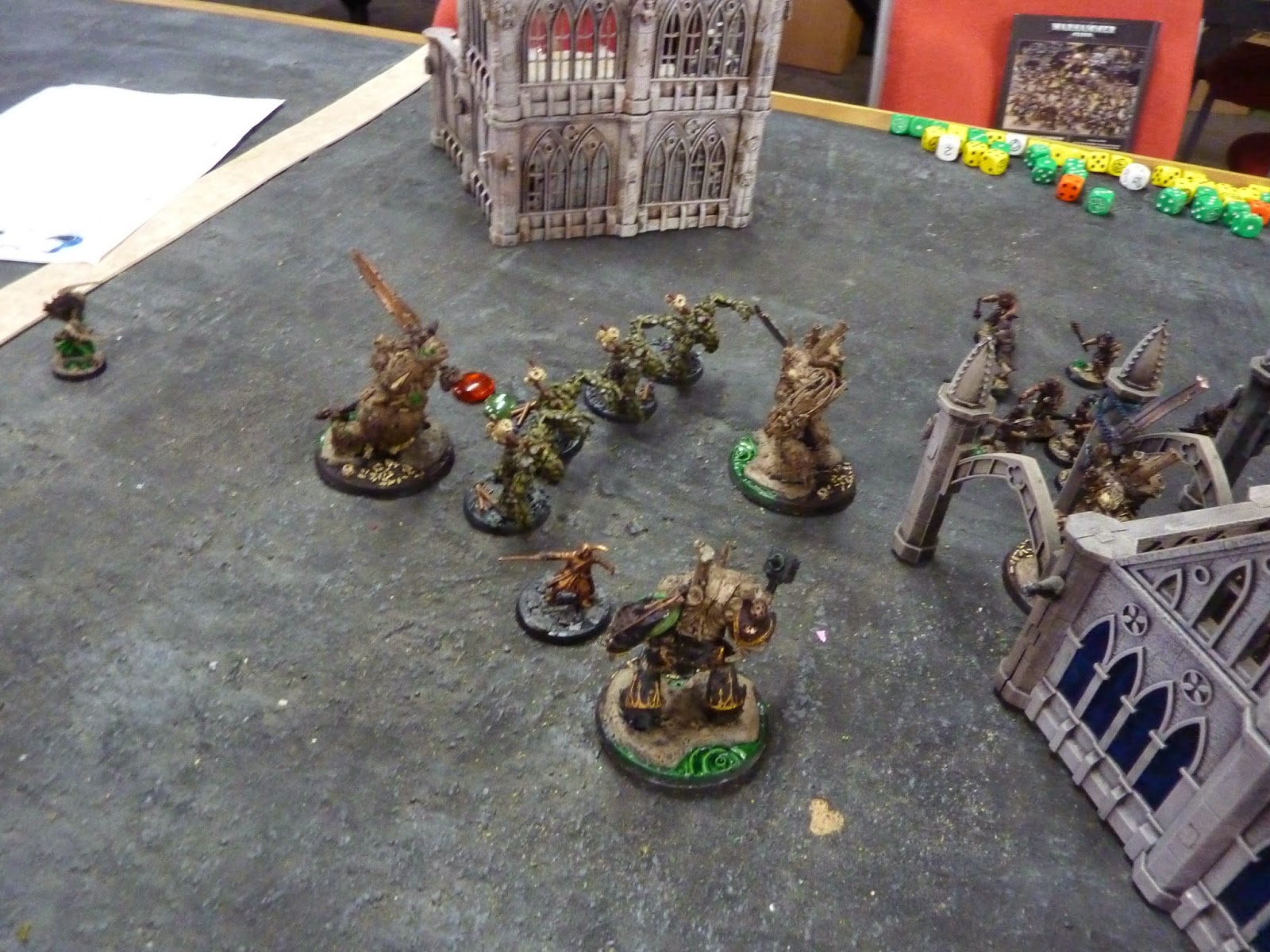 The final mission is a new one for Blog Wars. Control Freak has three central objectives that give a point up at the end of each player turn. For the most part I think people enjoyed playing a different kind of mission. When I decided to run this I didn't realise 7th edition would contain something similar in the form of Maelstrom of War but I'll be looking at those tactical objectives for inspiration to improve Control Freak. There were some players who commented that this game was over too quickly and that sometimes their opponent built up an unassailable lead leaving them as spectators.

I think this could be addressed by increasing the turn limit from 5 to 6 and preventing any points from being scored in the first game turn. That should go some way to preventing the person going first from having an advantage. This mission was a test of something different to try and break up the monotony of the rulebook missions so I'm keen for everyone to give me as much feedback as possible to help improve it.

I made it very clear this time that tabling doesn't give full VPs and I think for the most part people played with this in mind. There were a couple of very quick tablings where the winner didn't score full points but that's the idea. I was also aware of a couple of games where the guy doing the tabling was stalling for more points which isn't ideal but hopefully players can keep to the spirit of the competition and keep this to a minimum.

The End of 6th Edition
This was the last Blog Wars of 6th edition and I have to say for the most part it's been a good run. There's no doubt that there's some dirty combinations that can be created with the allies system but most of the players at BW seem to have kept their lists in the spirit of the event.

As I've said, I'll be trying to play plenty of games of 7th edition over the next few months so that BW8 will offer the best 7th edition experience possible. I will, of course, be blogging about it and I'll want your feedback on how BW8 adapts to the changes in the game.

Your Feedback
Blog Wars only works if I'm running an event that people actually want to attend. For that reason I rely on getting a good deal of feedback from the people who come along. This is especially important for the new guys so please get in touch with your impressions of the event (good or bad) so that I can make it better next time around.

Finally, I again want to thank everyone for coming along and the staff at the NWGC for their continued support of this event. I hope to see all of you again at BW8 in November. Keep an eye out for details of that.
Posted by From The Fang at 11:00:00