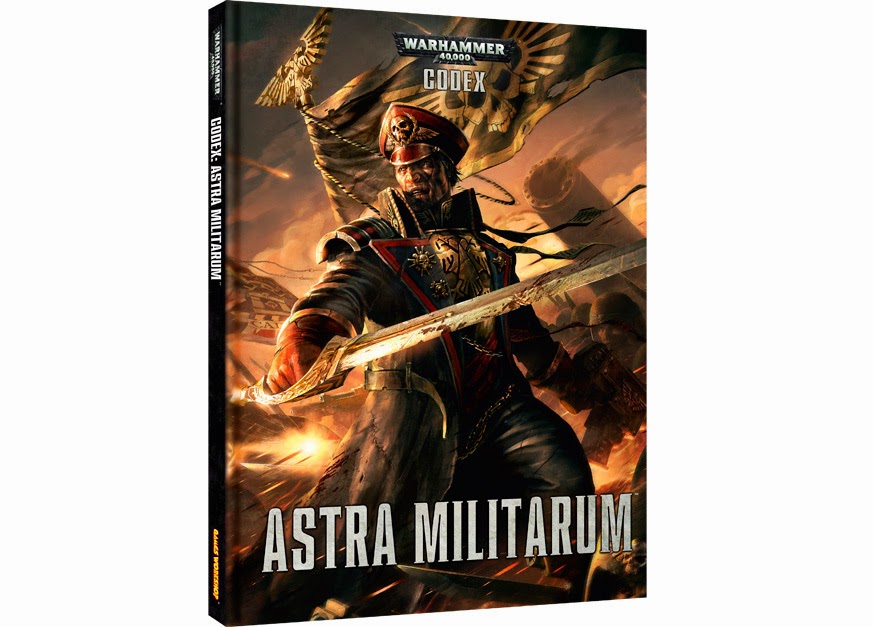 The rumours were true and what we once knew as Imperial Guard will now forever be referred to as the Astra Militarum. Well, realistically everyone will still call them "Guard" but nice try GW. Anyway, the new codex is another of the now very familiar 104-page format. There's a decent chunk of fluff at the front of course but the notable thing for me is that, despite the rumours, GW haven't done away with everything except Cadians. I can only assume these rumours were based on the Militarum Tempestus book or something.

With the exception of Orders there aren't really any army-wide special rules which is the same as the old book. Of course, being a new codex there is a dedicated Warlord Trait table and as I'm sure you've seen in the rumours by now there are some new orders available along with some changes to existing ones.

Warlord Traits
The first thing to note is that tank commanders can only take the first three traits (which makes sense when you read them). I have to say that as trait tables go the AM one is pretty solid. You're getting Outflank for D3 units, Preferred Enemy for his unit (although only for one codex which is an issue against allies I suppose), a morale bubble which is better than most other books, Relentless for his unit, the ability to give orders or extend order radius/give an extra order. I can't really see any of them being particularly weak. Obviously Relentless is only useful for certain units but still there's a strong selection here.

Voice of Command (Orders)
Orders work in a similar way to before with the unit receiving the order need to pass a leadership test to accept it. As before the unit must shoot immediately (although "immediately" isn't actually spelled out) and a double 6 prevents and further orders being issued that turn. What's different though is that a double 1 doesn't give a free order but rather means that subsequent orders from that officer are automatically successful. Difficult to say if that's an improvement or not as frankly a 1/36 chance of it happening is hardly game changing.

There are now 9 orders with the first 6 available to any officer but the last three limited to Senior Officers (who can issue two orders). Here's a quick rundown:
Bring it Down has therefore changed from twin-linked and First Rank, Second Rank now specifically includes hot-shot lasguns and Fire on my Target now completely ignores cover rather than a re-roll. Otherwise, the old orders are the same. The new ones could be pretty useful though particularly Take Aim and Forwards for the Emperor. It's a shame that Incoming! has gone but a lot of the time units are getting +2 for going to ground anyway e.g. behind Aegis lines or in area terrain.

Next, it's worth looking at who can actually issue orders and at this point it's worth noting that Chimeras still allow orders to be issued from inside. Anyway, here are the guys doing all the ordering:
Finally, there are new Orders available for Officers of the Fleet and Tank Commanders. The Navy Orders (OotF) basically offer reserve manipulation but the Tank Orders are always issued at Ld9 and are as follows:
Not hugely useful but I can see that extra smoke coming in handy for the Tank Commander's unit. I'll discuss orders further when I talk about the possible combinations in my units reviews but I thought this overview would be helpful.

Heirlooms of Conquest
Like all of the new books the AM codex has some special wargear. Most of the time these things are overpriced for what they offer but let's give them the benefit of the doubt and take a look:
As ever then these are mostly overpriced. The SM  (or should that be Adeptus Astartes) book actually had a decent selection which makes these look a little weak in comparison. Guard haven't ever really been about fully tooled up elite units though so I can't say it's a big loss. 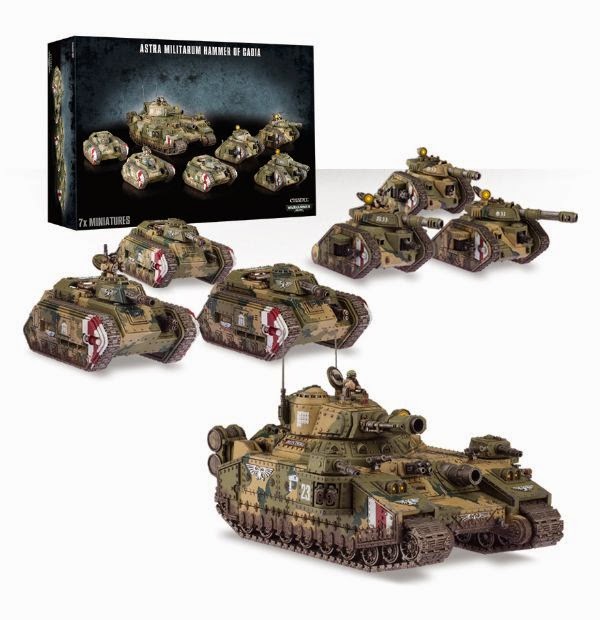 Finally, it's worth noting that there's a couple of new army bundles available with the launch of the AM codex. There are two Defence Forces one for Cadians and the other for Catachans. Both contain essentially the same models but with different clothes on and both are on sale for £100. Depending on how you add up the individual cost of the units you could save up to £33.50. Obviously buying the Heavy Weapons teams in the triple pack and getting some cadians with your chimera brings this saving down a bit but still it's worth thinking about if you're new to Imperial Gua...err... Astra Militarum.

There's also a the Hammer of Cadia which gives you three Hellhounds, three Leman Russ battle tanks and a Hellhammer. This set offers a saving of £66 against the individual sets! If you're fancying a wall of tanks then definitely worth thinking about although you may want a different Baneblade variant. Still this trend of offering bundles with the new codices is welcome, even if it effectively means the "battleforce" now costs £100!
Posted by From The Fang at 17:00:00