It's been a while since Matt and I have managed to get a game of X-wing in. We'd fully intended to play several games but the 40K game we played in the morning (more on that tomorrow) took up more time than we expected. Anyway, since our last game Matt has picked up the TIE Advanced expansion which gives him access to Darth Vader so we had to include him in our game. Here's what we fielded: 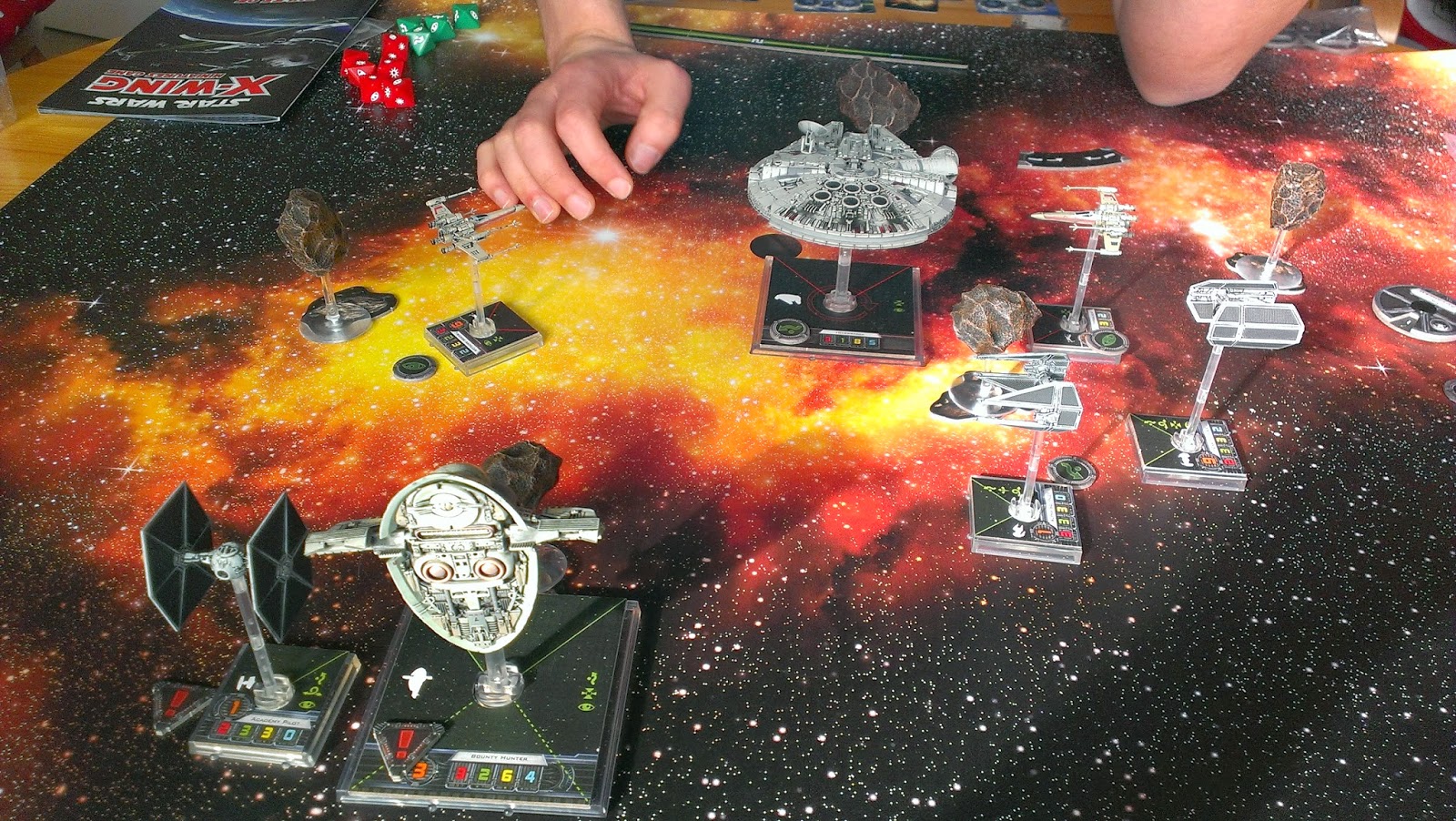 I'd originally decided to give Veteran Instincts to Wedge but since Matt was fielding Darth Vader I thought it would be rude not to use the point to make it the actual Millennium Falcoin. Remember this for later though. As usual the Rebels would be outnumbered and Darth Vader is pretty damn good. Hopefully the Falcon could make up the difference. Once again we were just playing to the death. 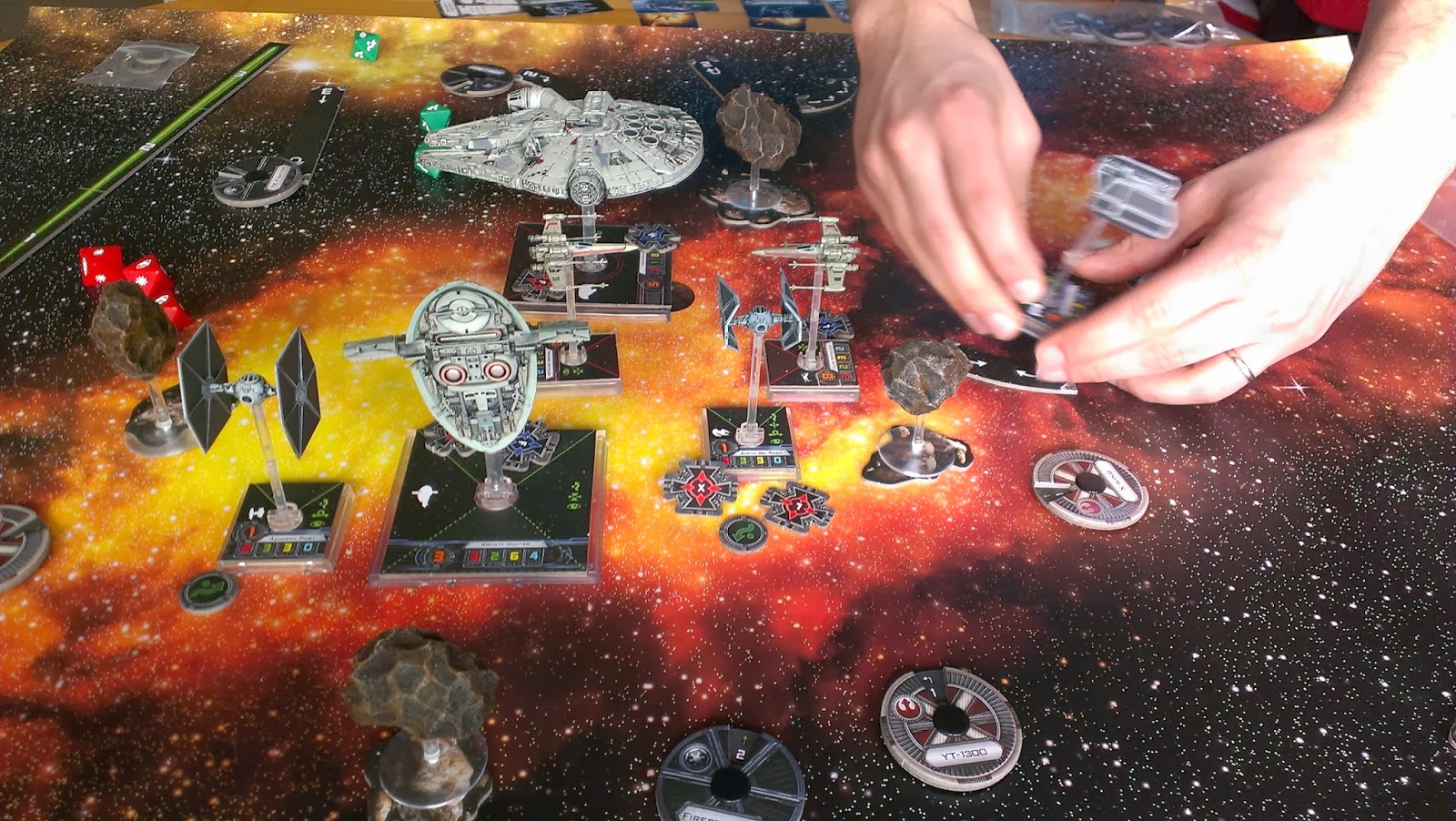 Matt advanced all his ships forward at a a fair tilt but I thought I'd try and be clever and split my ships up after deploying them close together. Sadly, I misjudged my moves so I'd definitely hit asteroids with both the Falcon and Luke. I'd also managed to drop Luke in range of Vader who stripped a shield away with his opening volley. Luckily both ships didn't take damage from their collisions with the asteroids but they still took fire. At least this time they were able to put out some damage too.

I then reconverged my ships in the centre as the Empire ships performed the obligatory koiogran turns to end up behind the Rebels. Shots were exchanged stripping shields from the firespray and Vader plus some from the Falcon and the remaining shield from Luke. The next turn's manoeuvres were all incredibly close but somehow all the ships managed to avoid colliding with each other. 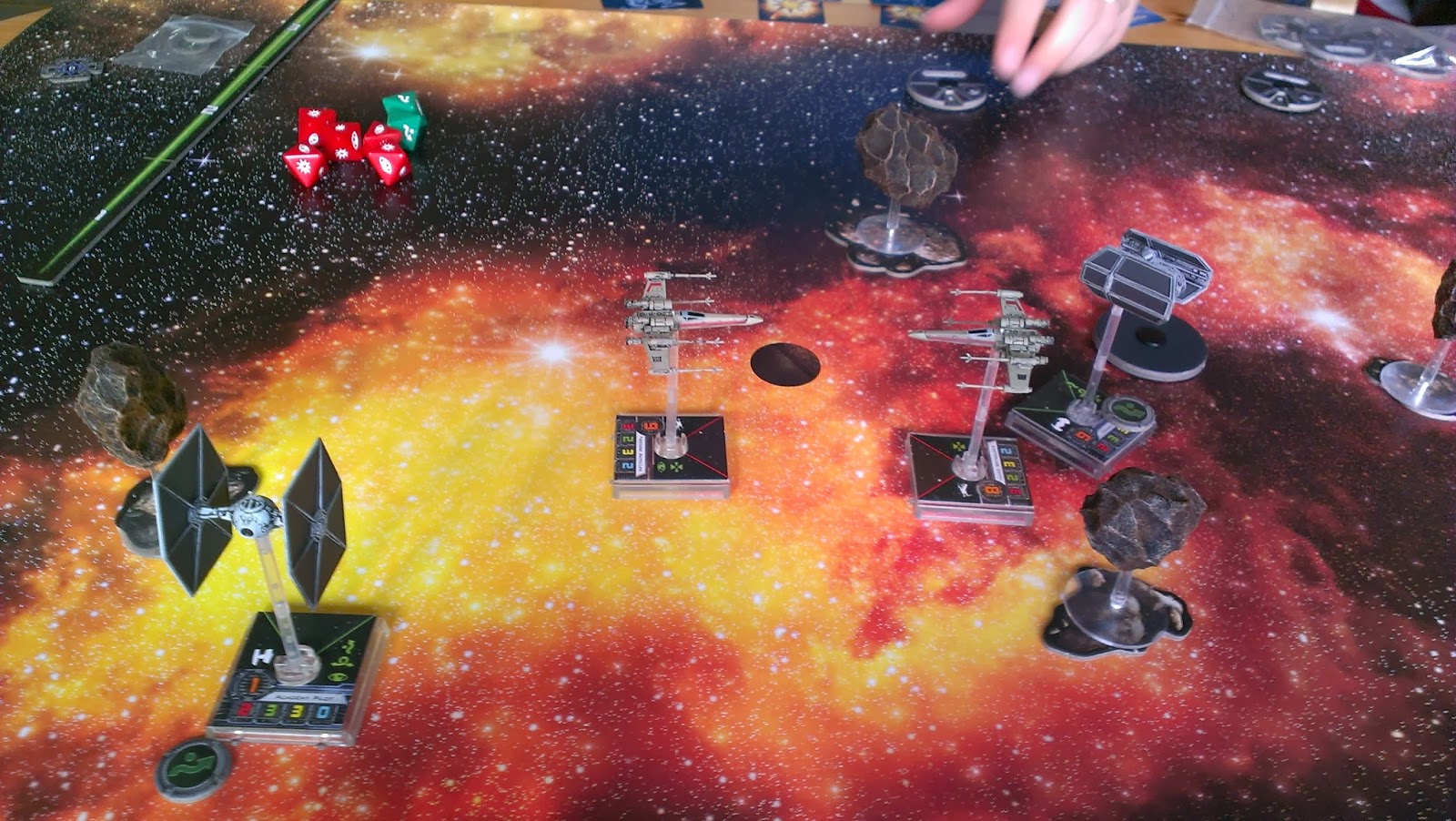 Concentrated fire on the Falcon somehow resulted in it being left with a single hull point (Darth caused 4 damage) allowing a lowly TIE fighter to cut it down. It wasn't all bad for the Rebels though as the firespray and interceptor were both blown from the sky.

Darth and the remaining TIE had been damaged earlier so Matt wasn't confident he'd be able to take down both X-wings before his ships were blown up. Unfortunately for me I helped him out a lot with my next set of moves. Wedge misjudged his koiogran and ended up overlapping Darth meaning he couldn't turn but still took stress. This left Luke very exposed. He'd only got two hull points left but Darth only scored two hits. Sadly I rolled a double blank meaning he was destroyed and Wedge wasn't able to target anything. 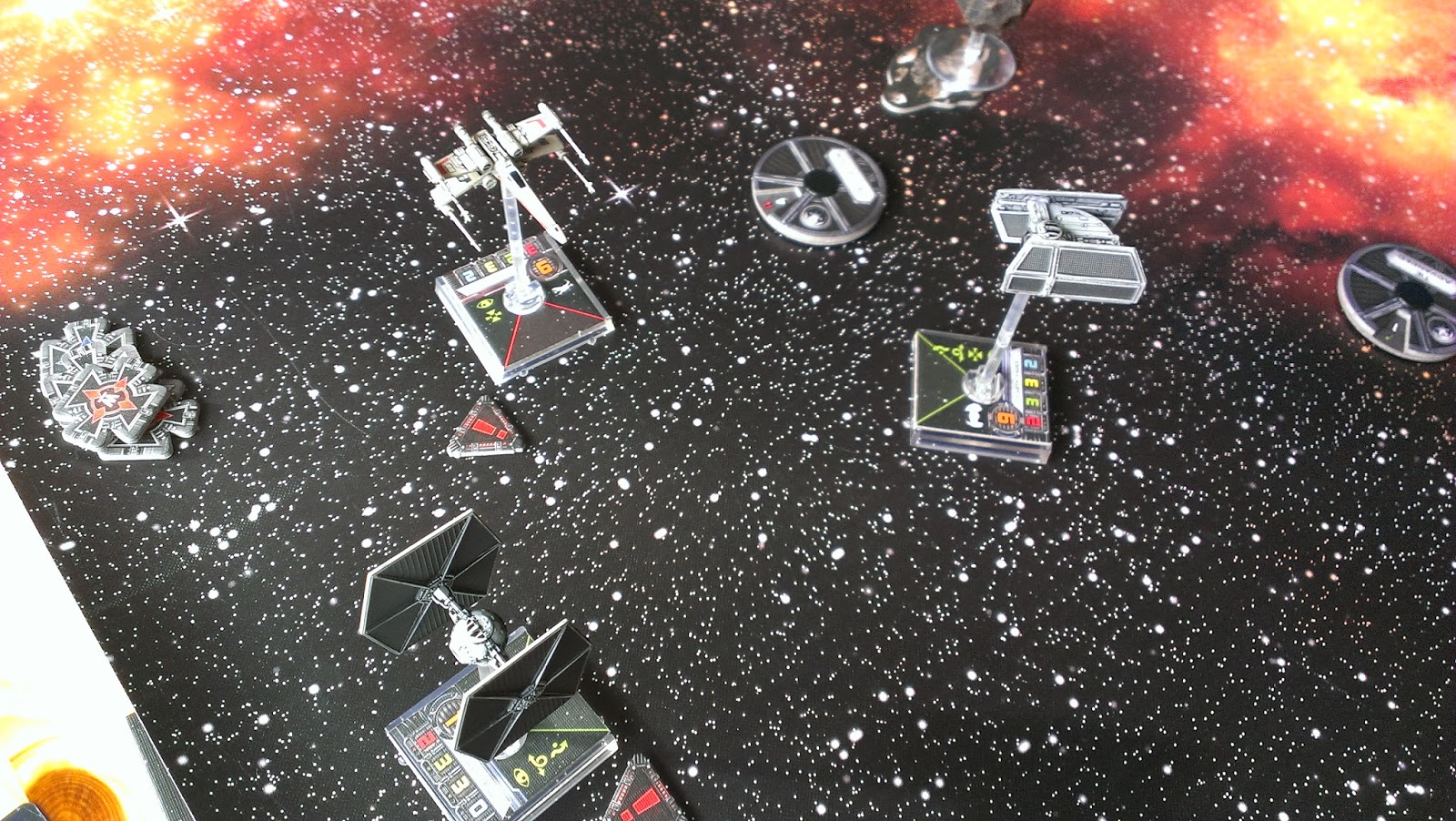 It'd now be up to Wedge to finish off both TIEs to win the game. Luckily his X-wing was in pretty good shape though. The trouble was that thanks to yet another failed koiogran he ended up with Darth on his tail. He eventually managed to put himself in a position where he could kill either the TIE or Darth and chose to kill the TIE who was yet to fire. This proved costly though as, after a few nifty moves, Darth and Wedge were nearly face to face. Darth's higher pilot skill proved to be the determining factor here as he gunned down Wedge before he could retaliate.

Interestingly, had I resisted the fluffy option of calling it the Millennium Falcon and kept Wedge's Veteran Instincts it would've been mutual destruction!!

Conclusion
There were several points in this game where it looked like it would be a pretty one sided affair. I cocked up right from the off and put myself in a really difficult position. Once again I gave too much thought to my own moves and not enough to where I expected Matt to put his ships. There's an element of chess with X-wing where you have to predict what your opponent is going to do as much as think about what you're doing and that's where I was lacking this time. 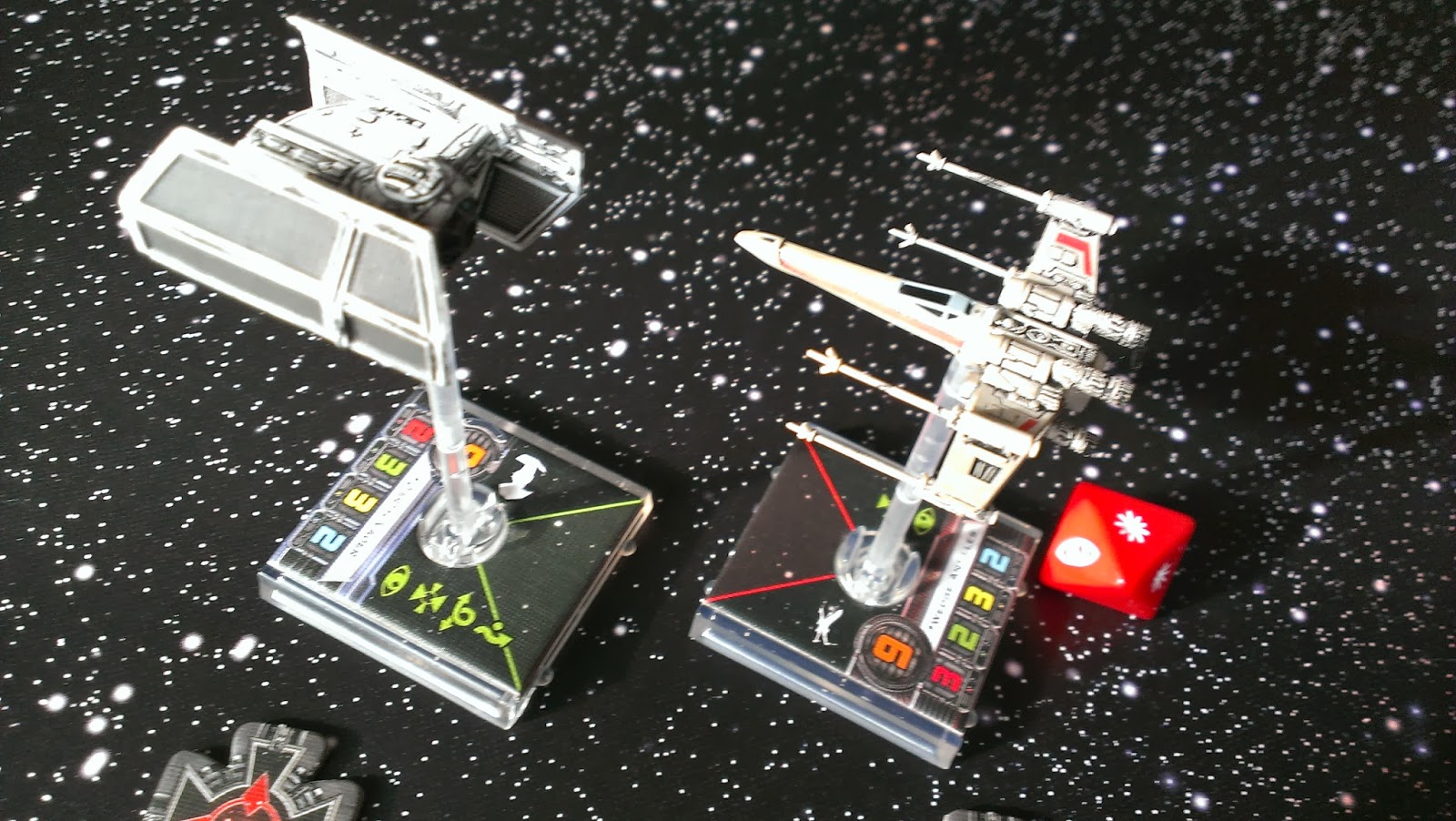 It's the first time the YT-1300 has been shot down (although we've only used it 3 times). It's still excellent though with it's huge amount of "wounds" and 360 arc of fire. Luke was pretty underwhelming though as he didn't really make the most of his defensive bonuses and died a little prematurely. Wedge was the star of the show for the Rebels then, even though I forgot his special ability a couple of times.

Darth Vader is as impressive as I expected. Being able to carry out two actions is a big deal as he can often barrel roll into range 1 or out of his target's fire arc whilst still getting a target lock. It's rare for him to fire without a lock which compensates for his relatively low damage output. He's difficult to handle!

Somehow the game ended up incredibly close and yet again it felt very balanced regardless of the ships in use. The game flows a fast pace and the whole thing only took an hour. I'm totally obsessed with this game now and can't wait for our next encounter. We really ought to start playing through them missions a bit more and trying out more ships. I've got a Y-wing and HWK that I haven't put to use yet so they'll have to get an outing next time. I'm hoping the next session will be in a couple of weeks so stay tuned for that.
Posted by From The Fang at 18:00:00