I may have criticised GW in the past for their patronising 1-click bundles which gave the impression of a bulk buy discount but actually cost the same as everything individually. This time though they're doing it right and it only seemed fair to acknowledge that for a change.

In case you haven't seen them yet GW are doing some bundle packs for Christmas. Unlike the 1-click collections these all come in a single box and actually offer a decent discount. There are three for fantasy but obviously I'm more interested in the three for 40K. Element Games are doing 20% off them and all but the Stormwing will give you free shipping (orders over £80 qualify). 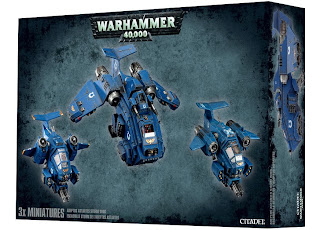 This contains two stormtalons and a stormraven and comes in at £85. Obviously that's still a decent chunk of cash but the models individually would cost you £105. The key thing is that any player thinking about starting a Space Marine army might actually want these models. In the past the battleforces and megaforces we've seen contain models that aren't wanted by most players e.g. the vyper in the Eldar battleforce. However, stormtalons and a stormraven are actually a great addition to a SM force. These appear to be available through your FLGS which for me means 20% off. That means I can pick up the set for £68 which effectively gives me just over 35% off the RRP.

Of the three bundles this is the one that tempts me most as I may actually get use out of these. I was having a self enforced ban on buying 40K models until I'd painted more stuff but this might just tip me over the edge. 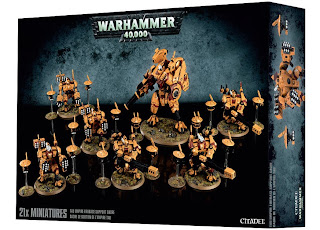 You might think I'd be tempted by this bundle too but I'd be too tempted to build all the broadsides up as HYMP suits and I've vowed never to use them! Anyway, this set contains a riptides and six broadsides for £175. That's not small change but if you were starting a Tau army then you could do worse than buy this box. Any Tau army could benefit from these models and the discount is decent again. The combined total would be £230 for the individual boxes so that's a saving of £55 which is essentially a free riptide! If I was buying this from my FLGS at 20% off I'd save a whopping 39% off RRP! That's great in anyone's book.

I'll definitely not be getting one though as, if nothing else, I've nearly run out of Adeptus Battlegrey and the new colour just isn't a match! I'd love to own some broadsides as I love the models but I'd just feel too dirty using them! I can see them shifting a lot of these bundles though as they're great value (if such a thing is possible with GW products). Let's say for a minute that like me you already own a pair of riptides and you're unlikely to run three. Buy the box at 20% off, sell the riptide for £40 (not an unreasonable amount to get for it) and you've got 6 broadsides for less than £17 each which is 55% of their RRP and about as cheap as you'll ever get them! 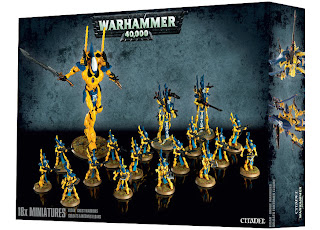 Last but not least we come to the Eldar collection. It's no surprise that GW have done bundles for what are likely to be the most popular armies at the moment. Not everyone will jump at this bundle as it's very much themed towards wraith units. If you were thinking of an Iyanden army though then this will sort you out. The set gives you one wraithknight, two wraithlords and 15 wraithguard/blades for £160. If you total up the individual boxes you'd be paying £216 which gives you a huge saving of £56 which is the best of these new bundles. Again assuming I got this from my FLGS I'd pay £128 which would give me a huge 41% off RRP. This is GW we're talking about here! Obviously your results will vary depending on what your local shop offers but even 10% discount like that offered by Wayland Games would give you 33% off RRP.

In a similar way to the Tau collection if we sold the Wraithknight for £56 (20% off RRP) then you'd have paid £72 for two wraithlords and 3 boxes of wraithguard which is better than half price!

The Other Stuff
GW have also released six new paints today. I can see a use for all of them in my armies but they're mostly for finishing models off and I'm a long way from being able to do that!! Even so it's worth checking out the videos on the GW website to see what each one does. Obviously they're a bit patronising but the important thing is to see how the paints work.

Sadly GW has also taken the opportunity to put up more of their stupid 1-click bundles that save you no money so don't get carried away with the bundles and think that you're actually getting the rest at a discount too.

Finally, we've got some limited edition things for Chaos. Firstly there's the Chaos Collection which is £175 for two codexes and a supplement (need I say anything else?!). Then there's the Armies of Renown book which is £20 and contains shots of their 12 armies of the month from WD with a few painting tips again a waste of money if you ask me. Finally there's the Chaos dice which come in different colours depending on which Chaos god you're worshipping. GW dice are always more expensive than you can get them from eBay etc but for £6 they're hardly going to break the bank.

Right, that's it for now, sorry if this whole post seemed like a massive advert but I felt it was only right to spread the word about GW offering a genuine discount for a change!!
Posted by From The Fang at 09:01:00