The sixth (can you believe it?) Blog Wars happened at the NWGC in Stockport yesterday and there was plenty of drama! Before I get to that I want to talk about the good things. First off, a big thanks to the staff at NWGC for keeping us fed and watered. I know the venue was cold but next time it will be June and Darran from the venue has promised that for the next winter one he'll have a heating system.

Secondly, thanks to everyone who came. I don't know about the rest of you but I think there's a great atmosphere about the event and generally everyone seems to be playing in the spirit of the thing. There are now just 3 players left who are veterans of all six Blog Wars and they are Matt Greenwood, Graham Sanders and Chris Benstead. A special thanks to those guys for their unerring support of the event.

Around two thirds of the players there were veterans of previous Blog Wars which I hope shows how enjoyable the day can be. There are plenty of tournaments out there that get more players but I hope people think the Blog Wars atmosphere is worth coming back for and I still can't think of a tournament that offers more in prizes for such a relatively small player count.

Anyway, let's get the embarrassment out of the way right now. Here's the results of Blog Wars 6 which have also been added to the Blog Wars Results Archive. 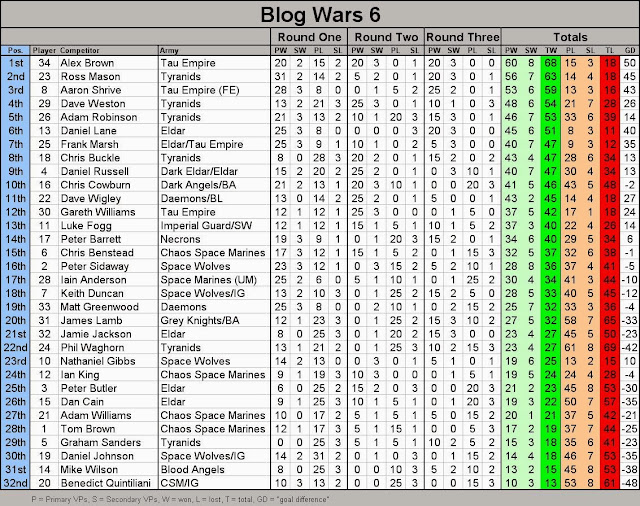 As you may have spotted I unwittingly won my own tournament. I know that's a ridiculous situation but I'll explain more about it when I cover my Battle Reports. Suffice to say, announcing myself as the winner wasn't the only time during the day that I wanted the ground to swallow me up but before I get to that I'll talk about a couple of other things with the results. First off you'll notice Franco's absence but I'll get to that in another post.

The other thing to note is that of the five Tyranid players three of them finished in the top 5. We know the codex is stronger thanks to Biomancy but it goes to show you can find life in the older books even with the ever-changing meta. The Eldar lists are pretty well spaced through the list but I should point out they weren't the standard competitive lists you might expect. Finally, congratulations to Ross Mason and Aaron Shrive for taking 2nd and 3rd place respectively at their first Blog Wars event.

The Scoring System
Here's a reminder of how the results are sorted:

The theory behind this was that I should always be able to separate two players on something as it was very unlikely that people would score the exact same points in all categories. Of course that ended up breaking in the first round with Matt Greenwood and Daniel Lane scoring identical points across the board. For the first time in Blog Wars history I made a massive error on the scoring in the first round too. I'd had two players drop out, one to illness and one absent without any explanation. Luckily I was able to call in a couple of standbys to fill in the gaps. I assigned them the numbers of the missing players but then entered them on the spreadsheet the wrong way round. This meant the scores for their games were entered wrong causing the whole kerfuffle.

Anyway, this gave me an opportunity to realise that the scoring wasn't in fact broken and I could split Matt and Dan up by the number of VPs they'd conceded (old school VPs that is) when their maximum 2000pts and equal secondaries wouldn't help. Problem solved.

The idea of this scoring system, coupled with the tweaked scenarios, would result in each game being worth a maximum of 25pts. This would give plenty of scope for separating scores and would reward people for winning more convincingly. Obviously as a winner you don't care how decisive the victory is but if you lose the game it matters that you get recognition for making it a very close game. I understand the argument that a win is a win but that's fine for the competitive events. Blog Wars is different by design.

Overall I'm pretty happy with the scoring, I know it has issues (which again will be discussed in more detail in another post) but to me it works how I want it to. Right, sorry this post was a bit later going up than usual but I was too knackered to post last night and have been out all day today.

Over the next few posts I'll discuss the big drama of the day, cover the painting competition, report on my battles and generally cover the action from the weekend. Once I've run through all of that I'll do the same as last time and take a look at what worked and what didn't in order to make Blog Wars 7 better for it. Hopefully you all enjoyed it and some of you are reading this hoping to come along next time.
Posted by From The Fang at 20:52:00