We've been planning on starting a blood bowl league for a ling time now. Well, since Matt got the box set for Christmas anyway! I plumped for the Orcs that come in the box and Matt's got a Skaven team from eBay.

Whilst we've both played the Xbox game a fair bit, we've only had a couple of proper games. We're going into the Chaos Cup tomorrow with a few friends who play pretty regularly. Should be fun no matter what happens.

The thing I like most is the simplicity. There aren't many things to remember. Even when the special skills come into play they mainly give re-rolls or modifiers. Combined with the 4 minute time limit this means games are fast paced. Unlike 40k there isn't anything to argue about. Thanks to the living rulebook pretty much everything is properly clarified. That and movement is by squares so there's no sneaky inch pinching.

Anyway, I'll write a full report of the cup later in the week. If you haven't played it, I thoroughly recommend it. Like Necromunda it's cheap to get into too! 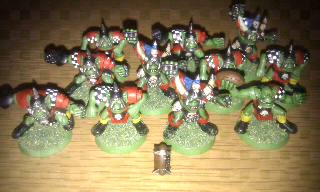