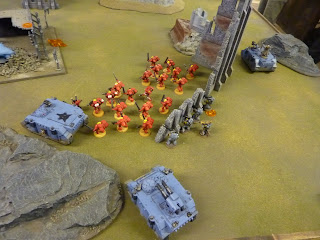 Our army list for the tournament was as follows:
750pts of Space Wolves
Rune Priest (Jaws & Lightning)
(2x) 9 Grey Hunters (MotW, meltagun, PF)
Rhino each
Long fangs (2x las and 2x missile)
Razorback (TL lascannon)
749pts of Blood Angels
Mephiston
Sanguinary Priest (jump pack & power weapon)
Assault squad (3 additional marines, meltagun, power sword, melta bombs)
Assault squad (5 additional marines, meltagun, power sword)
Our logic was pretty simple. Play to the strengths of each army. Blood Angels specialise in resilient troops that close quickly on their enemy and are devastating on the charge. Wolves are all rounders capable of long range fire but not as quick. We originally had 3 squads of grey hunters and no long fangs. However, I'm glad we changed our minds because the LFs would prove to be invaluable throughout the tournament.
We decided to go with Jaws and Lightning for the priest since we were clearly an army set for all out attack. Some of the other powers are good but the range of lightning means you can always get it off and the potential of jaws against really tough targets was hard to resist. The grey hunters are pretty obvious, we though Wulfen would be more useful than a standard since it's effective for the whole game and we decided PFs were vital to help us hit vehicles and high toughness. Not to mention the need to compensate for the lack of PFs in the BA list. The long fangs fulfil their usual role and would just be plonked down in some suitable terrain. The razorback would be close by to add a bit more S9 to the mix. We went with 2 las and 2 missile because sometimes that extra point of strength can make the difference. We could've used the points we saved to buy a couple more hunters but I really think the lascannons were more valuable. A lot of people dismiss them because they're soo much more expensive and lack the dual purpose of launchers.
The BA list is equally straightforward. The assaults squads are used together in the centre of the field to ensure that the priest is giving the benefit to both. Assuming we'd remembered to roll for red thirst and got it the priest would go with the squad that didn't. If neither did then we'd keep it with the larger squad as that would make it the most effective. Mephiston is pretty self explanatory. He acts as a fire magnet and happily can soak up a hell of a lot of it meaning people tend to ignore transports etc. Once he gets into combat he makes light work of anything he touches really. Granted there's the risk of power fists but against anything other than vanilla terminators there's only likely to be one wound per round of combat.
It seems, from reading other blogs, that a lot of people prefer cheap rhinos/razorbacks for their BA lists. I can see the benefit of the extra fire from the razorbacks but once their transports go pop they're pretty vulnerable. Jump packs give you far more movement options and FNP provides similar protection to a vehicle.
We didn't have much of a plan thought out since we wanted to wait and see who we'd end up playing. We expected that there'd be a lot of MEQ around and that IG would be a popular choice. We hoped that the BA portion of the army would be able to get into combat with shooty armies by turn 2 and therefore keep themselves pretty safe that way. The Wolves would play a more conservative role providing support for the BA and holding the line at the back.
Next post will be a battle report I promise!
Posted by From The Fang at 20:42:00