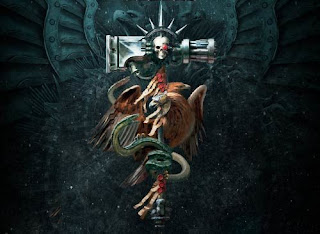 Getting a bit behind with these now so I've got a few to do to catch up. I'm going to separate the Faction Focus articles into a separate post but there'll be a bit of overlap here and there. These articles help me get my ahead around the information so far to try and get a feel for what 8th edition will be like.

Battle Forged Armies
Formations are gone!! It seems too good to be true for someone like me who really disliked them. I really hope they're still going to do some faction specific detachment style things though. It seems from the comments on Facebook that they generally don't want people getting "free" bonus rules.

Otherwise things look pretty similar apart from a few tweaks. Flyers are now a separate FOC slot. That means they aren't hogging Fast Attack slots but also means that some detachments might not allow them at all. Time will tell. Interesting that they say that a single Detachment should share a faction keyword and they consider "Imperium" to be one. Will this mean that you can take guard and marines in some detachments?

The Patrol Detachment shown seems like a halfway point between the old Allied Detachment and CAD. Doesn't give you any Command Points (more on these in a later post) but gives you quite a mixed army for a minimal mandatory portion. Rack up enough for a brigade and you've got a huge amount of mandatory stuff but you get 9 command points to play with. Won't be hard for some armies to fill these slots assuming points stay roughly the same.

It isn't until the final sentence that we get to find out that we can still take multiple detachments in the same army. Should be possible to collect up quite a few command points if you just take the minimums. It'll be down to TOs to limit the abuse of this.

Large Models
Interesting that Gargantuan Creatures and Super-heavy vehicles are gone. Leaves some questions such as what happens when a big thing blows up now? How far will they be allowed to move? I'm a big fan of things like the Morkanaut being made to feel bigger and better. Of course it's all based on assumptions but they already look better than they did. The only thing that springs to mind is that some of their weapons were blast which were actually slightly better at hitting targets than regular shooting.

I love the damaged vehicle getting progressively weaker. I know this is something that's been in AoS for a bit but I've never played. Makes much more sense than the old vehicle damage table which felt brutal for some vehicles and inconsequential for others. What will be interesting to see is how big monsters are affected by this mechanic.

My only concern is that they keep saying about you not being able to take out vehicles in a single shot. Obviously this is good if you own the vehicle but sometimes that plucky meltagun wielding guardsmen taking down a land raider was pretty dramatic. I can't help but feel that having a lot of shooting will still be more reliable than having a smaller number of dedicated anti-tank weaponry. We'll see I guess.

Infantry
There are some massive changes here. First up the To Wound chart. This effectively means that some lower strength weapons got better against high toughness stuff (some of which they couldn't even harm before) but some higher strength weapons will now need a 3+ against units they used to wound on a 2+. It's clearly designed so that, with saves changing for some units, you'd need an insane amount of shooting to reliably take out a big target with weapons not designed for the purpose.

I've got mixed feelings about every model in a unit being able to shoot at different targets. Of course it makes sense that a guy carrying a meltagun wouldn't vaporise a guardsman when there's a Leman Russ next to him but does make you wonder why you'd bother putting things into larger units. If they lose models they'll take casualties from Morale sooner than a smaller unit would and you can shoot at whatever you want anyway.

Let's face it, most of the time it'll be "these nine guys will shoot their bolters and that squad but the lascannon will shoot that tank". It won't slow the game down as much as some of the whingers on Facebook think. The key is that, unless I've missed it, I hope they clarify that you have to decide what each model will shoot at before you shoot anything. I'm sure they will.

Characters
No more deathstars is the short version of this post. You can't join units with any ICs. Presumably sergeants etc will lose their character status though. That will make a huge difference to how we play the game. You can't shoot a character if there are other models in front of them either. It's an interesting mechanic but will prove a pain on those occasions when you'd rather shoot the big guy than a couple of squishy troops that got in your way. It'll make it more important to try and outflank or deep strike in behind stuff to pick off the character.

Be interesting to see how area effects work now too. Seems like they'll still be "bubbles" like in 7th. Does that mean you'll end up with a character surrounded by a pile of units so they all benefit from something that he'd have only given to his own unit before? Sidenote: might not sell my Kroot Shaper model after all!

I'm pleased that we won't have Characters tanking wounds for units anymore though. Obviously you could still put them out front but it'll be a lot harder to prevent your opponent from shooting squashier stuff first.

Seems like MC characters can't hide in the same way but not sure if this will apply to all of them or if it'll be a based on size or something. Also seems that snipers and the like will become pretty useful for taking out characters - as they should be!

Conclusion
There's a lot to digest here but it's clear that our game will be vastly different in so many ways but so far it still seems like it'll feel like 40K. I seem to be saying this after every post but it's hard to make any real conclusions when we've only got bits of information to go on.
Posted by From The Fang at 20:49:00