Dark Eldar (or is that Ynnari?) for the Doubles - Part 3

Well it's been three weeks since I last posted anything!! I've been pretty busy getting my Dark Eldar ready for the doubles but I'm still worried I won't get them finished with just under two weeks to go. Hopefully I can get a lot done on the bank holiday weekend but there's still a lot to do. Anyway, let's see what I have managed to achieve.

Reavers
These guys have probably had the most love since they're easily my favourite Dark Eldar models. The scourges are probably a close second but there's just something awesome about these jetbikes that made them the first thing I wanted to paint: 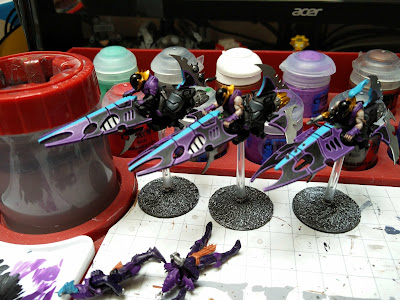 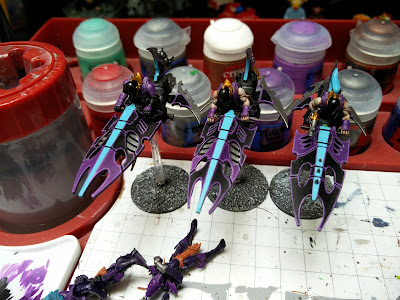 There hasn't been a ton of progress on them since the last post but they've all now got gold helmets and I've added some 'ard coat to their facemasks. I'm pleased with the results and with the exception of perhaps doing the engines in gold too (like you can see on the one in the middle in the top picture), I'm happy to field them like this. They're not finished but they're good enough for the event at least. If I get some time (unlikely) I'll come back to them for the finishing touches but with time running out I really need to get on with the rest.

Venoms
This has been most of my work for the last couple of weeks. I had one of the four venoms up to a reasonable standard so I set about working on the other three. 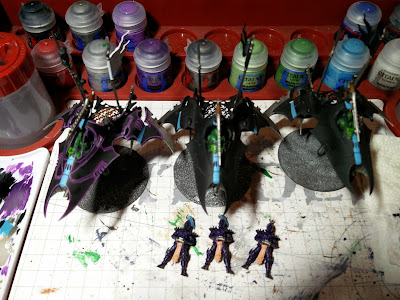 This is pretty much where I left off when I was trying to paint them this time last year for Double Trouble. I didn't get much further than doing the cockpits in an attempt at green OSL and then in Lothern Blue stripes down the middle. 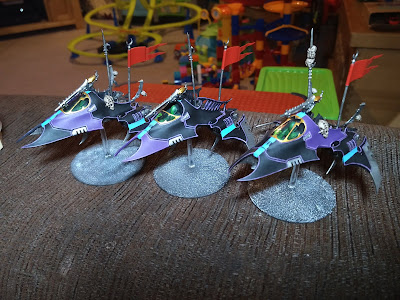 And here they are now. There's quite a bit of change I hope you'll agree. I've continued the random purple panels from the Reavers. I'm not convinced it really works on the Venoms though and I'm wondering if I should've just painted the same panel purple on all of them. Too late to worry about that now. Anyway, they've all had highlights of Xereus Purple followed by Genestealer Purple. I've added gold round the cockpits to tie in with the Reavers and painted all the skulls in. The final bit of work was to paint the flags Mephiston Red. If I get time before the event they'll get a transfer on the flag and a few transfers elsewhere. It'll probably be a night before the event kind of thing if at all. Still I'm happy with the progress. Again I might do the engines in gold to match the reavers (assuming I get time to do them even) but the only other thing I want to do is paint in the skulls properly. The gunners also all need doing but I'll do them along side the Kabalites. Speaking of which...

Kabalite Warriors
There's three squads of five to paint here. There's a single test model in amongst them that needs some tweaking too. I've decided to do their helmets, shoulder pads and chest plates in purple to tie into the vehicles better and just lift them up from being just line highlighted. Thankfully a lot of the basecoating was already done from a good while ago so they just need the purple painting in and line highlights across the board. That's easier said than done of course but I'd have no chance if they weren't even painted at all. 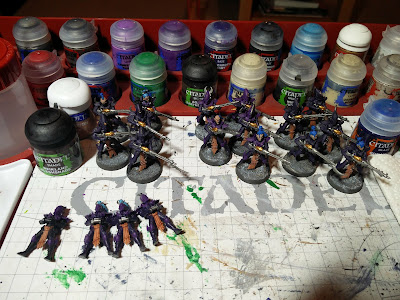 You can see I've also started on the gunners for the venoms too. I'm hoping to get the bulk of the warriors done by the weekend so I've got all of next week to work on the scourges.

Scourges
Again, there's some paint on these guys from my token efforts before Double Trouble but little else. However, my wife suggested orange wings for the "bat wing" ones and red for the feathered ones. I decided to try out a test model of the orange to see how I liked it. 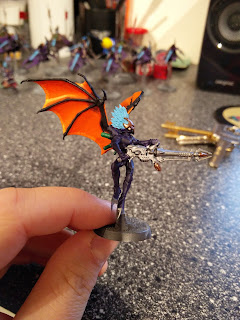 The lighting isn't great but you get the idea. First off, painting orange is a fucking ballache without an airbrush (like I had for my Knights). For subsequent models I'll try and mask and airbrush them to get a much smoother finish on the wings. What do you think of the orange though?

Conclusion
I think there's actually a reasonable chance of me pulling this off but it'll still be a slog for the next couple of weeks. I did manage to fit in an evening of Blood Bowl the other night to start our league of though so I'll try to post up about that. Matt's coming over soon too to actually get in a couple of test games with our list so we at least have some idea what we're doing.

Thinking I should bring these guys to Double Trouble 2 as I had fun using them last time and at least I won't be so ashamed of them this time! 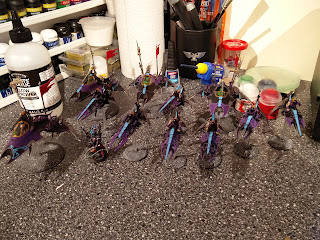 Right, best get back to painting. Will hopefully have another update for you soon.
Posted by From The Fang at 20:34:00