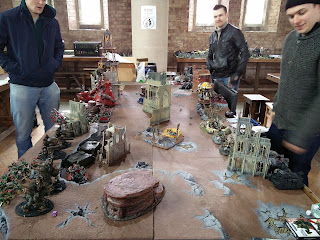 Matt, Jamie, Dan and I have been trying to get together reasonably regularly to play some big doubles games of 40K. The first saw 3,500pts of Jamie & Dan's Tyranids take on Space Marines & Space Wolves belonging to Matt and I. The second had 3,000pts of Chaos (Matt/Dan) take on Blood Angels/Dark Angels (Jamie/Me). That game was way back in March 2014 which shocks me a little! Can't believe it's taken us the better part of three years to get together again. We've planned to play again in April this time so at least the wait won't be as long again.

Anyway, on Sunday we headed down to the Sanctuary near Mansfield for the latest battle. The only pairing we haven't had so far was Dan and I taking on Jamie & Matt. We chose to up the points to 4,500 this time around to allow us to include a Stompa without limiting our options too much. We also decided that the two halves of the doubles teams didn't have to be equal so I had around 2,400 to Dan's 2,100 and Jamie/Matt did something similar. Apologies for the blurry pictures at times. It was freezing in there (it's an old church!) so my hands were probably pretty numb!

Dan's Nurgle force consisted of a couple of formations (in the form of a Plague Colony and a Helforged Warpack) and a few other bits. That meant a winged DP, Lord, some spawn, 4 rhinos of plague marines, defiler, 2 forgefiends and 2 maulerfiends. My Orks had a warboss, painboy, weirdboy, burnas, a morkanaut, stompa, some deffkoptas, a dakkajet, 3 trukks of boyz, a 20-boy mob and a 30-boy mob. 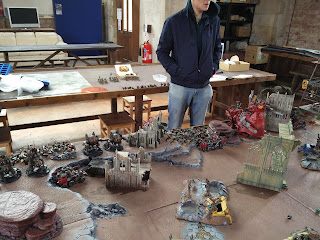 Facing us were Jamie's Iron Hands with chapter master on a bike, bike squad, a land raider full of assault terminators, cataphractii terminators, a predator, whirlwind, vindicator, sternguard in a pod, techmarine on bike with a conversion beamer and a contemptor dread. Matt's "half" consisted of a mixture of Imperials including a techpriest dominus with some kataphron breachers, an culexus assassin, librarian with custodes, inquisitor with GK terminators, a dreadknight, a handful of guardsmen squads, company command squad in a chimera, veterans in a chimera, a vendetta and an Imperial Knight. 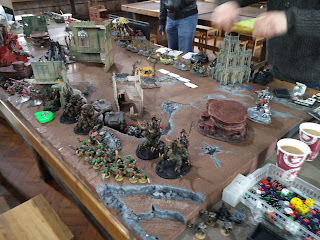 The theme for the game was that the Orks were invading an Imperial world and the local PDF (represented by Matt's guard) had discovered that the horde's weirdboy had been messing with some things he shouldn't. That led to Nurgle daemons/CSM arriving. An Ordo Malleus inquisitor arrived to help fight off the Chaos forces and called in help from the Iron Hands and other nearby Imperial force. We'd be playing a standard game of Maelstrom but both the Weirdboy and Inquisitor would be worth 5 VPs each when killed. Whilst they were alive they'd be able to bring in plaguebearers and militarum tempestus scions each turn. 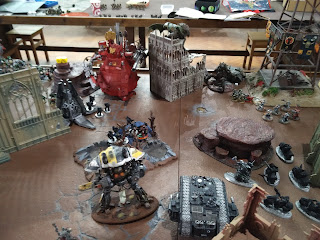 They won the roll off and spread their forces out across the full length of their deployment zone (we were playing Dawn of War on an 8' x 4' table). We toyed with deploying the Stompa on the opposite side of the field to the Imperial Knight to let it run riot for a couple of turns before the IK stepped in. However, in true Orky fashion we opted to deploy it directly opposite instead so they'd inevitably get into combat.

The brought down a chunk of their reserves in the first turn with the dreadknight arriving on our right flank. On the opposite side the sternguard podded in right in front of the Stompa hoping to bring it down with melta fire and the Inquistor brought his terminators and some scions in to support them. When I realised I'd also positioned the Stompa straight across from the kataphron breachers I was worried I'd lose him before he even moved. Fortunately some incredibly jammy invulnerable saves (thanks to the Morkanaut's KFF) allowed him to survive with just 4 HP lost. Elsewhere their armies went to town on my trukks destroying two of them and leaving a third damaged. 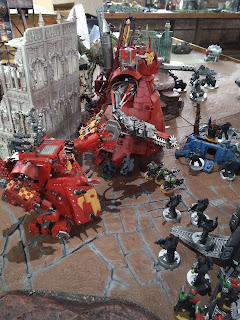 That left the GK terminators, scions and sternguard stranded right in front of our lines. One mob of Orks who'd lost their trukk dealt with half of the sternguard (who'd combat squadded) and the other half got eviscerated by the stompa's chainsword. The scions somehow survived the plague marines firing on them and wounded the deffkopta on overwatch allowing them to finish him in assault before he swung. The daemon prince and defiler charged into combat with the Inquisitor killing him and his squad. The burnas hopped out of the Morkanaut to allow their meks to try to repair the Stompa but they failed. On the opposite side of the field the maulerfiends and the only mob still with their trukk charged into combat with the dreadknight hoping to overwhelm him. We were lucky to keep everything alive but fluffed a lot of our rolls meaning that the dreadknight's sanctuary power kept him alive with two wounds remaining. 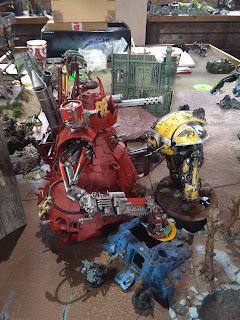 The stompa was now very vulnerable to a counter charge from the IK. Before that could happen though, the vendetta arrived and stripped a hull point and the breachers added another meaning it had half of its HP remaining when the IK charged. The land raider disgorged its terminators into the fight too. Despite all this the stompa managed to come out with two HP remaining but failed with it's own attacks only hitting the IK once and causing just a single HP of damage. Despite getting 3 stomps there were no 6s and the terminators survived. Unsurprisingly the stompa went down in the next turn and I realised that I'd forgotten to get the 20 strong mob out from inside it so they perished in the blast. 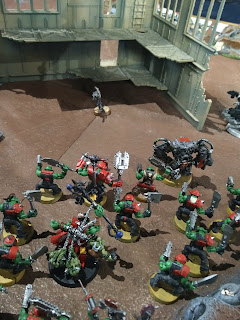 Elsewhere the Culexus saw his opportunity, darted out from behind a building and tossed a psyk-out grenade at the weirdboy. This caused a perils (the weirdboy had already had one in the first turn) which killed the ork psyker. Its mission accomplished, charged into combat and killed off the nob in a challenge before the warboss crushed the assassin in his power klaws. The dreadknight was luckier this turn and managed to kill off both of the maulerfiends. This left just the Orks to deal with him and they didn't provide much resistance. 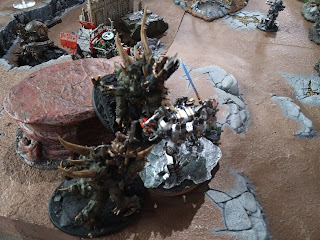 The dakkajet arrived and managed to strip a couple of hullpoints from the vendetta. The daemon prince and defiler were now stuck in combat with the chapter master and his insane 2+/3++/2+ FNL combo. By this point I only had a handful of Orks left and Dan's plague marines were getting hammered by the custodes, dreadknight and tanks on the right flank. It would probably have ended up a tabling but the store was closing soon so time was running out. That meant we'd only make it to the end of turn 3. At the end of the Imperial turn the score was 14-10 so we looked for a last ditch attempt to sneak a win. 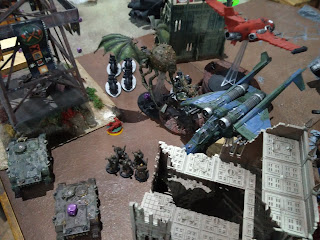 We drew Hold the Line and two objective cards. One was under the Imperial Knight so forget that one. The other was deep in Imperial lines but the Warboss unleashed a Waaagh! and went for it. We'd also need linebreaker so the deffkoptas blasted into their deployment zone. So, with Hold the Line, line breaker and one of the objectives we'd get a draw. We therefore hoped we could kill their two Warlords to take the win. The forgefiends were able to wreck the command chimera leaving the occupants for the dakkajet to deal with. With the vehicle only wrecked, Matt managed to hide the commander behind the wreckage. Despite killing most of the squad, they passed their morale check and stayed alive. The insanely tough chapter master hung on against the daemon prince whilst the warboss' unit failed their charge. This left us with a 14-12 loss. 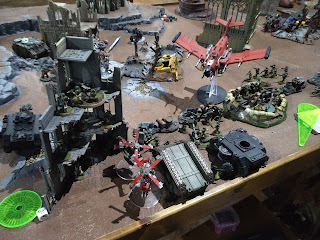 Conclusion
It never felt like a particularly close game but this was mostly down to our failing as generals! We should have definitely had the stompa on the opposite side of the field. That would've meant it could deal with the tanks etc on the right flank before the IK got to it and the breachers wouldn't have been in range straight away. I've still not used my stompa as much as I'd have liked but I'm thinking of taking it to Dave's Birthday Bash 2.0 in a couple of weeks.

We could've also played for the objectives a bit more by focusing more fire on the scions to shift them off the objective which would've been worth 2 VPs to us at the time. Still it was great that we had a (slim) chance to steal victory in the end. We've already booked a table at WHW for our next battle in April which will see Matt and I paired up again. Probably with good old Bloody Wolves (BA/SW).
Posted by From The Fang at 17:00:00