I find it difficult to post about my hobby progress which is why you won't find much hobby content on FtF. The problem is, the time I spend blogging about it is time I could be actually making progress. My free time is pretty limited so if I'm going to get projects finished then I need to focus all my available time and effort working on them rather than procrastinating with the aid of Blogger. Trouble is, blogging also works as an excellent motivator for me as I want to be able to post hobby content on here. The other main drive for me is when I've got a tournament coming up. It's the reason my Tau are even painted at all and that at least some of my Orks and DE have paint on them. Well, this time the plan is to take a couple of knights so that's what I'll be talking about today.

I've already mentioned my first knight on here and what you see in that post is probably the extent of the progress I ever made on him. Well, this time I'm determined it's going to be different. My original knight is still in the same state but as I mentioned in Saturday's post I've assembled and fully magnetised two more. Today I'll show you the progress I've made towards painting them. 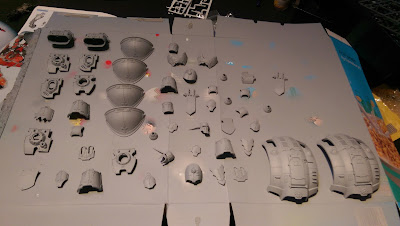 First off here's a couple of shots of the parts once they'd been primed. Incidentally, I used Wilko Enamel Spray Primer which comes in a 400 ml can (same as GW sprays) but costs £3.95 (unlike GW sprays!). I was a bit worried that being less than half the price of the Citadel stuff it'd be crap but I'm pleased to report it worked flawlessly. I'm very pleased with the finish so I'll probably be permanently switching to it and saving a fortune. Sadly they don't do a black spray though. This was probably a good thing for the armour plates to help the orange out but I'm not sure whether it's affected the appearance of the metal skeleton. As you'll see later it doesn't look like it but I can easily compare to my first knight to decide at some point. 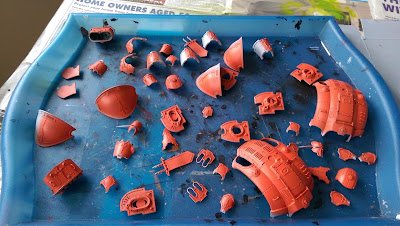 Here's all the armour plates with an airbrushed coat of Wild Rider Red. I've talked before about how it isn't really red at all but more of a pinkish orange. Anyway, it may not be a base paint but through the airbrush it still goes on well enough to cover the grey (like Just for Men!). I'll hit these panels with some Troll Slayer Orange next before doing the Abaddon Black bits. I'll need another airbrush session for that though and that means a guaranteed hour or so which is tricky to get with a two year old so it'll have to wait until one evening this week.

Whilst I'd got the airbrush out for the Wild Rider Red, I painted all of the skeleton in Leadbelcher: 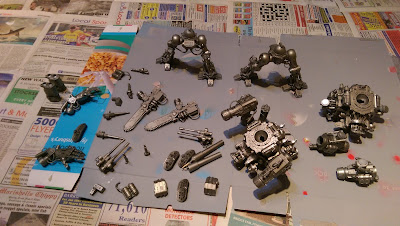 I know they have their detractors but I think Citadel paints go through the airbrush just fine with some Vallejo Airbrush Thinner mixed in. Having said that I'd like to try the Citadel Air range and see if they're any good. I've tried a couple of Vallejo air paints but something in me doesn't like straying from Citadel (foolish I know!). Next stage was to hit all of the skeleton with a heavy dose of Nuln Oil: 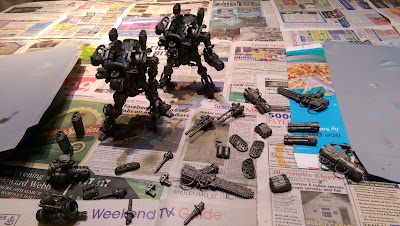 Then a drybrush with Necron Compound: 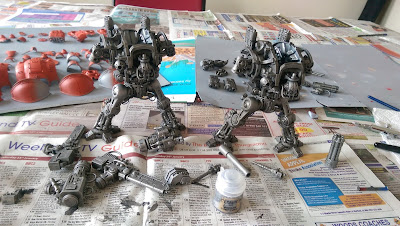 I'd never used the Citadel Dry paints before and I have to say I was pleasantly surprised. Mind you, one piece of advice, don't try and stir them!! I made that mistake and ended up with a pot full of painty gravel! Nevertheless it goes on pretty well and is probably easier to work with compared to normal paints. I tend to find I accidentally get too much and ruin a panel or two which didn't seem to happen with the Necron Compound. Mind you, I still think I probably over did it but that was because I was rushing to try and get it done whilst my son was having a nap.

You'll notice that in the last couple of shots I've got significantly less parts involved. Well for the tournament I'll be using one as a Warden and the other as a Paladin so to save time I'll only paint up the relevant components initially. I can easily come back to the rest at a later date.

You can also see in that final shot that I've started to put in some of the detail too. I've painted a couple of coloured cables some in Macragge Blue and others in Mephiston Red. I've also added some Balthasar Gold to pick out a few details but I ran out of time to do any more.

Unfortunately, for various reasons, I'll not be making much more progress not until next week but I'd hope by the end of next week I'll have the skeletons pretty much done. There's a couple of armour panels I missed that I could've left off for aibrushing so I'll either mask around them or else try and achieve a good finish with a brush. I'm leaning towards the airbrush before I think orange will be tricky without. I don't think it's an unreasonable target to have the skeletons done by next weekend so then I can focus on the armour panels the following week. I've only got until March 12th to get them done so it'll be pretty tight when you factor in the transfers and basing too. Wish me luck!
Posted by From The Fang at 17:00:00