This is it, the Apocalypse!

Seems like a long time since I posted anything up but I wanted to talk about Apocalypse. Matt, Scott and I are heading down to WHW on Wednesday to play our first game using the proper Apocalypse rules.

We've had a 6,000pt game before but this was essentially just a big game of 40K without any of the rules from the expansion. We never bothered with the old version of apocalypse as we always felt our collections were too small and we didn't own any of the special units in the apoc book. However, Matt used his winnings from the Blood Brothers tournament to pick up a copy of the new version of the expansion. Therefore we simply had to take it for a spin.

So on Wednesday we're going to be play an 8,000 pt Apocalypse game on one of the big tables at Warhammer World (it might end up being the same one we used for the 6K game as I failed to book early enough to get the Tau table I wanted. I'm currently debating whether we need 12' x 8' or 8' x 6'. Kind of difficult to know but as you can see in the pictures below my army takes up most of my 6' x 4' board!

Anyway, Matt and Scott will be bringing a combined Imperium force with Blood Angels, Imperial Guard and probably some GK thrown in perhaps. I'll be facing off against them with my "Triumvirate" of Tau, Orks and Dark Eldar. I had thought about using some of my Space Wolves or Dark Angels but decided to keep my theme limited to xenos. Here's a shot of my whole army: 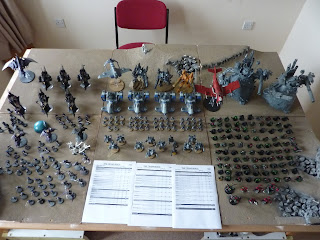 The army is split pretty evenly between the three races. Points-wise there's slightly more in the Ork part, then the Dark Eldar part and finally the Tau bit has the least points. The general idea was to use as many of the apocalypse formations as I had the models for and I also wanted each portion of the army to have a flyer to make things interesting in the skies above the battlefield. 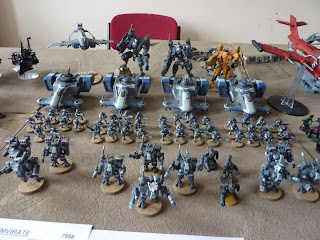 This is the Tau force. There's a Riptide Wing, Counterstrike Cadre and a Rapid Insertion Force. On top of that there's a commander and a Sunshark so pretty much everything is in an apoc formation. 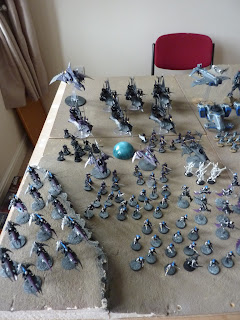 The Dark Eldar force has some reavers that I didn't fit in to the full army shot. They're part of a Dark Olympiad and there's a Kabalite Web Strike since I couldn't resist a webway portal that allows vehicles to emerge. The third formation is Ravager Titan Hunters which will hopefully help with Matt's Revenant titan (proxied by a Wraithknight). The only DE unit that isn't in a formation is the Voidraven which I'd have like to have fielded in a squadron but didn't have access to enough models. 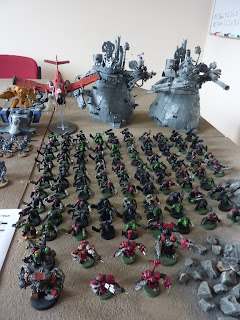 Finally we come to the Orks. My original plan for the apoc army was just to have Tau and Orks with as many boyz as I could lay my hands on but I've limited it somewhat since I don't have enough boyz built up. Even so there's 96 boyz, 4 nobz and a warboss in a single Green Tide who'll be joined by Ghazghkull and a Big Mek to make them punchier. Not sure how I'm going to roll enough dice when they charge something but I'd be surprised if I get even half of them into combat at any one time! They're joined by a dakkajet (again I'd have liked a squadron but don't have the models). Last but not least there's a pair of Stompas as my only super-heavies.

I have to say I'm excited at the though of using the stompas. They'll probably end up dying quickly knowing my luck but at least they're imposing. I've borrowed one from Jamie and the other one took me the best part of a day to build last week.

I would've loved to have the whole army painted in time but that just isn't realistic. The orks will be my next big project (until I get distracted by something else - more on that later) and hopefully in future apocalypse games I'll be able to field a bigger ork force.

This whole thing will be a massive learning curve for all three of us. I'm pleased that none of us have played apocalypse before as no-one will really know what to expect. At the moment I predict it will go one of two ways. Either we'll end up taking ages to get going and barely finish by the end of the day or we'll whip through quickly as waves of my army is dying. I can't say I'm all that confident against the might of the Imperium as I expect there'll be plenty of tanks and I've not exactly got tons of anti-tank fire there.

Still I'm excited about the sheer scale of the battle, I hope it's at least an enjoyable experience that we'll get to repeat fairly soon. Stay tuned for a battle report on Thursday or Friday.
Posted by From The Fang at 16:43:00