The fourth Blog Wars tournament took place this weekend at Maunsfeld Gaming (Maelstrom's old "Eye of the Storm" venue). Normally my coverage of the event would begin with the results, cover the painting competition entries and then move on to battle reports from my games at the event. There's one slight problem with the battle report part.... I didn't end up playing! With one participant unable to make it through sickness and my back-up not able to take part I was merely a spectator this time around. However, all was not lost because this meant that I was able to appreciate the event as a whole which will hopefully make future events better. More on that later but for now here's a rundown of what went off this time around. Incidently there will be a post about the painting competition still.

Like a Monkey with a Miniature Cymbal
First things first, as you may have read over on the Sons blog, Andy Humphris managed to take victory for the fourth time out of four! This prompted many a discussion about what we can do to stop it happening again. Let me say before I go on that I don't for a second think that Andy didn't deserve victory all 4 times. My first though was that perhaps we need some sort of handicap for him (no I don't mean breaking his thumbs). The problem with that is if someone else wins it will seem like a hollow victory. This applies for any of the other plans that result in Andy in some way being limited. What we need is for someone else to take the trophy from him fair and square. Not saying he wouldn't deserve to win it again but frankly I'm tired of giving him your money!

I think the problem is perhaps in no small part down to the pairing system. Now Swiss pairs isn't something unique to Blog Wars, it's pretty standard at most 40K tournaments. I could write a whole post entirely about the need for a better system and if I ever get the bleeding internet installed in my house then I'm sure I will. Anyway, the thought crossed mind that we should seed Blog Wars. Now, since everyone doesn't come every time we couldn't do it on past form and not everyone has been to a ranked tournament before so we can't use RankingsHQ. However, Andy himself suggested we do something similar to what I think Brighton Warlords (?) do in that they look at the army lists and divide them into tiers. Whilst I know most of the guys that come to Blog Wars, there'd still be some who might have an excellent list but not know how to use it or vice versa. Anyway, this can be saved for a future post. The point is I throw it open to anyone reading this. Everyone loves an underdog so if you reckon you can topple Mr. Humphris from the top of the Blog Wars pile then I invite you to come along to Blog Wars 5!

There were certainly some contenders this time in the form of Frank Marsh, Graham White, Franco Marrufo and Gary "The Voice" Percival who took second. Let's hope next time they can step up their game and stop him.

Clash of the errrr..... what's the opposite of titans?
For me the highlight of the day was the hotly contested battle for the wooden spoon. At the start of game 3 Graham Sanders and newcomer Andy Cox were on the bottom table. Graham's Squat guard against Andy's Necrons. History would teach us that bottom table in the final round is Graham's heartland but the new pretender to the crown (or whatever the opposite is) might offer a strong challenge (or weak whichever is better at this sort of thing).

To cut a long story short the game was close throughout. Andy was sending plenty of Necrons forward towards Graham's Aegis line (that his squats couldn't technically see over!). Volleys of fire from the tiny gunmen cut them down but they couldn't hold out forever. The Tyranids in the previous round had managed to eventually triumph and given enough time it looked like it would be the same with the Necrons. It wasn't looking good when wraiths managed to make it over the barricades and begin their assault. Sadly time's incessant progression would prevent the world from finding out how many squats it takes to kill a wraith. When the clock ticked down it turned out the result was a draw. We'd need to know the victory points (4th/5th edition style) to find out who the biggest loser was. Everything looked good for Graham to secure victory (but lose out on the title) leaving Andy to claim the spoon.......

I entered the results into the spreadsheet, hit sort, scratched my head, called over someone to check results and then realised that a certain Andy Lane had managed to come out of nowhere and steal the prize! The good news is that Graham took best army (more on that later) and Andy Cox managed to take a raffle prize.

The Results
Here's a full rundown of the results: 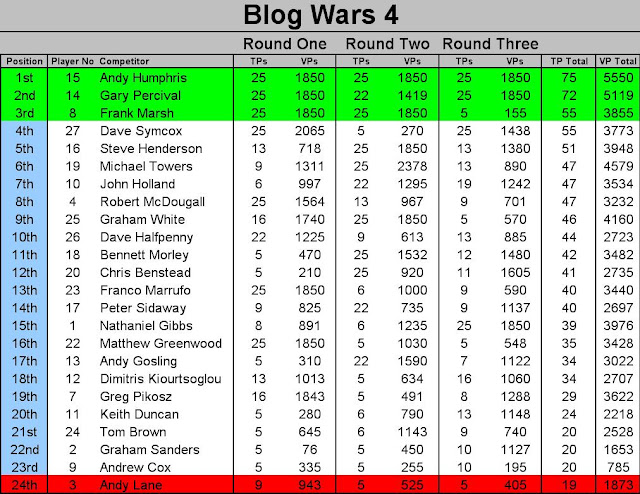 All that remains of this report is to say a massive thanks to everyone who continues to support this event. There are a handful of people who have been to every single one (or nearly) and that sort of dedication makes it worth the hassle of organising it.

PS. I'll add some more pictures to this post just as soon as I can sort my google storage problems out!
Posted by From The Fang at 21:04:00