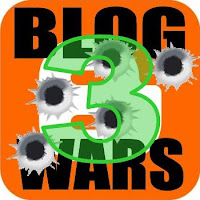 The third Blog Wars tournament took place yesterday at Maelstrom Games in Mansfield. For those of you who aren't familiar with it, Blog Wars is a twice-annual, friendly, 1,750pt 40K tournament with a slight comp in that all armies must contain a Special Character. The missions are all centred around this theme giving the special character more significance in each battle.
Without further ado here's this years results: 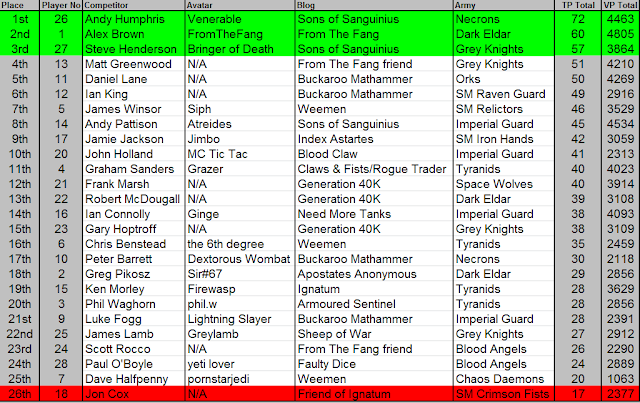 So the most obvious thing to notice is that as a group we all failed miserably to stop Andy Humphris from retaining his title. Fair play to Andy, he only dropped 3 points out of a possible 75 over the three games. Suffice to say he got plenty of stick from everyone involved. I'm sure Andy will be posting a typically humble account of how he secured victory. Andy played Daniel Lane's horde Orks in the first round, Gary Hoptroff's Grey Knights featuring Mordrak and finally James Winsor's Relictors.

Congratulations to Steve Henderson (Andy's mate) for his 3rd place. Steve and I approach tournaments in the same way. If we go in with confidence we'll perform badly but if we think we've got no chance then we'll exceed our expectations.

Speaking of which, you may have noticed that embarassingly (for me and everyone else involved!) I managed to achieve 2nd place overall and also scored more VPs than anyone else! This is surprising for several reasons. Firstly in all the practice games my Dark Eldar dual-webway list was utter crap but also because I'm frankly not that good a player! I was as surprised as anyone that I managed to pull it off but suffice to say I was pretty lucky with the armies I faced. There were some lists out there that I simply couldn't have dealt with no matter how good my dice rolls were! I'm planning on writing a whole post about the amount of luck involved in tournament success at a later date.

Over the rest of the week I'll be posting up battle reports from my three games to try and explain how I managed to pull off such an unlikely result! I'll also have a brief look at the painting competition (I didn't get chance to take many photos!) and finally talk about what's going to change for Blog Wars 4.

Once again there was a nice mix of veterans and new players (both in terms of Blog Wars and tournaments in general). It's a shame that some of the usual suspects couldn't make it this time around but there's always BW4!

Finally, once again, I'd like to thank everyone that attended this time around. Everyone seemed to enjoy themselves and there were some fantastic games. Sadly all of my games took a while to play so I didn't get much chance to wander around. I hope I'll see everyone again at Blog Wars 4. The next tournament for me is the GW 40K Doubles with Matt at WHW at the end of the month. We're hoping to squeeze in a doubles practice game against the lads from Sons so stay tuned for a report of that.
Posted by From The Fang at 13:00:00