Since I started this blog I've been promising pictures of my army so it's about time I delivered: 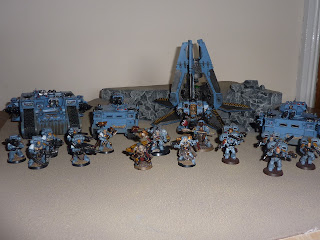 As ever you can click on the images for a better look. You'll notice that there's a lot of vehicles for the amount of troops. This is because I'm in the process of painting my grey hunters and wolf guard in bulk. Once they're finished it should look more balanced. Also whilst I've put sand on some of the bases there's only a couple that are actually painted. I intend to leave the basing til last so I can make the entire army the same. I've learned a lot whilst painting this army, particularly, that you can paint quickly and still achieve a good result. 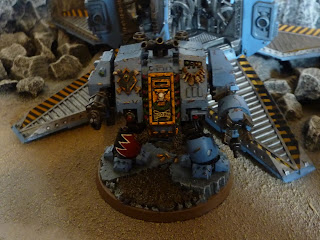 The first model I finished was this dreadnought. I've done some very minor conversion work in the form of giving it a wolf pelt under the sarcophagus, a wolftooth necklace and wolf icon. All of which were borrow from the fantastic Space Wolves Pack which provides plenty of material for converting normal Space Marines into the Sons of Russ.

I've attempted to give it some battle damage, both with paint and by messing up the plastic with a knife. Not sure how successful it is but I don't think it's bad for a first try. 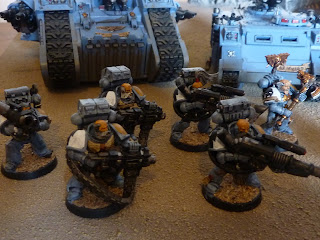 The next unit I painted was this Long Fangs pack. This was my first attempt at using the basecoat, wash & drybrush technique that the guys over at Space Wolves Blog use. It's a very satisfying way to paint as it gives great results for minimal time and effort.

I've already bought a second devastator squad from Dark Sphere to make another pack. This will also give me more weapon options when I want to field just a single squad. 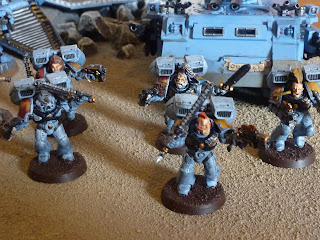 My next unit painted were these  skyclaws. I've used them in a few battles now and I'm still undecided on their effectiveness. I've bought a Space Marine Chaplain with Jump Pack that I intend to convert into a Wolf Priest so that I can stop these guys charging into combat without shooting the target unit up a bit first.

I'll have to convert one of them into a Wulfen at some point since I've come to the conclusion that no squad should be without it! 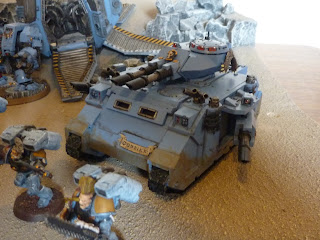 This is my predator which thanks to the excellent article on the Space Wolves Blog is fully magnetised so can be used with any combination of Predator weapons. It can also be completely stripped down and used as a Rhino or alternatively a Razorback. I'm intending to add some weathering and battle damage to it at some point but for now i'm trying to get as much of my army painted as possible so details like that can wait until later.


I'm pretty pleased with how all my vehicles have turned out so far. On the first picture you can see I've also got a razorback/rhino, land raider and drop pod that are pretty much finished. Again I'll weather/damage them at some point. 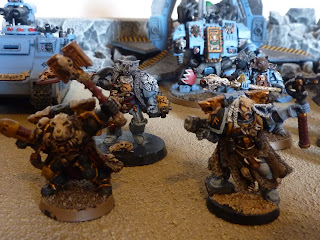 Finally, we come to my HQ slots. I was amazed how quickly I managed to paint these guys. Again they've got to be based but for the most part I'm really pleased with them. All of the models in my army need work on their faces but I'll probably do this at a later date too. Part of me thinks I should've put more of my troops in helmets for ease of painting but too late for that now. At least you won't mistake them for anything but Space Wolves.

There we go then, that's what I've done so far. It doesn't seem like much considering I've been painting this army for a while now. However, I've got several units that are in various stages of completion that I've not show here. So far I've got the following finished (minus some final details like basing):
Doesn't seem to bad until you consider I've got the following still to paint:
Phew! Sounds a lot when you list it all out. In actual fact most of it is painted in some way and shouldn't take too long to finish. My next project is the 10 terminators and I might make them into an article showing my painting technique if I remember to take pictures at the various stages!

I've got a campaign against Matt's Blood Angels next weekend so I've got to try and get a lot done this week! The end of it is a planetstrike mission so I've got an entire Imperial Strongpoint to paint up too. Obviously, I've got no chance so I might just aim to have the terminators nearly done for then and the scenery will have to wait.

I'll put some details of the campaign up mid-week and obviously battle reports on here once the dust has settled. Can't wait!