So my housemate Scott has been very busy lately painting up his Tyranid army. As ever he started with the coolest looking models first and then realised he ought to start making a legal list from them. Matt and I have been desperate to play against him ever since we saw the fantastic paintjob he'd achieved on his Trygon Prime. Therefore when he announced at the weekend that he'd got 1250 points ready to go we jumped at the chance. We decided to have two battles, firstly Scott would play Matt's Blood Angels and then face off against my Wolves. Bear in mind Scott doesn't really have a balanced list since, as I said he's painted some of the cooler Heavy Support units first. I'll start off with the BA vs Nids battle today and then hopefully I'll get chance to put up my battle tomorrow. Anyway here goes:
1250 pts of Tyranids
Hive Tyrant with Heavy Venom Cannon, Hive Commander, Regeneration and the Horror and Leech Essence psychic powers.
(2x) 8x Genestealers with scything talons and toxic sacs
Canifex with Stranglethorn Cannon and Regeneration
Old One Eye
Trygon Prime

5x Terminators with cyclone missile launcher
Sanguinary Priest with power weapon and jump pack
10x Scouts with Sniper Rifles
Assault Squad (10) with meltagun and power sword
Baal Predator with heavy bolter sponsons
Predator with Twin-Lascannons and Lascannon sponsons
Deployment
To keep things simple we decided to play Annihilation for both battles (especially since Scott didn't have many troops to play with) but we rolled as normal for the deployment type, giving us Dawn of War.
Scott deployed first putting one squad of genestealers and the Tyrant in the middle of the map. Matt deployed Mephiston on the Angels' left flank, the scouts up on a hilltop and the assault squad between the two with the Sanguinary priest lending a hand. The only unit to succumb to the Red Thirst were Matt's terminators. 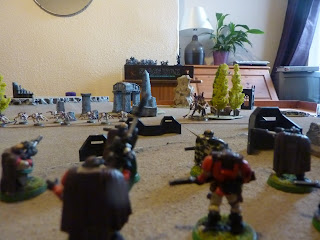 Turn 1
Scott brought on Old One Eye and the Carnifex leaving his second Genestealer unit and Trygon Prime in reserve. The Hive Tyrant fire his venom cannon at the scouts hitting two but only claiming one victim. His Carnifex's large blast scattered harmlessly away from the Blood Angels' Librarian.
In Matt's turn Mephiston summoned the power of the warp to allow him to sprout wings and fly towards the genestealers with the assault marines moving in to support him. The predator and terminators moved on and focused their firepower on the Hive Tyrant but to Matt's frustration his Krak missiles missed and the storm bolter shells pinged harmless off the Tyrant's exoskeleton. The Predator didn't fair better as the lascannons failed to hit the target. The Tyrants only wound came from one of his sharpshooters rending the exoskeleton useless.
The assault squad picked off four genestealers in a torrent of small arms fire and Mephiston finished off the rest without breaking a sweat.
Turn 2 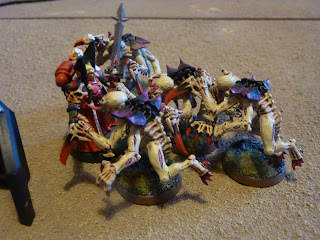 The tyranids continued to advance and it became clear that the deployment type was going to hamper Scott immensely as his Carnifex and Old One Eye were unlikely to reach Matt's lines intact. His Hive Tyrant fired at the terminators instead of risking not making it into combat. However, venom sprayed fruitlessly onto the rocks below the Terminators. The Carnifex hit Mephiston this time but the librarian was unscathed.
Matt had a lot of success with shooting this time round with the scouts unbelievably taking out Old One Eye in a single round of shooting after scoring a large number of rending hits. This was followed by the krak missiles from the cyclone launcher exploding the hive tyrant from within after the lascannons had weakened the mighty Tryanid leader.
Turn 3
The second Genestealer brood entered play on Scott's right flank and charged into combat with Mephiston. Unbelievably Mephiston annihilated the entire squad for just a single wound in return.
The Trygon Prime split open the ground next to Mephiston's feet sending out a shower of containment spines which claimed the lives of two assault marines who failed their FNP saves.
The Carnifex wasn't soo lucky and FNP prevented it from taking a single marine's life.
The Blood Angels responded by both Mephiston and the assault squad charging into combat with the towering Trygon. Mephiston attempted to fire his plasma pistol on his way in but it overheated, he reacted quickly however, and it did him no harm.
Thanks to Shadow in the Warp Mephiston didn't succeed either psychic test and on the second dark terrors from within took their toll on his mind. He did however achieve a single wound but the Shadow prevented him from killing it instantly. The Trygon failed to return the favour. The assault marines added another blow to the tally. 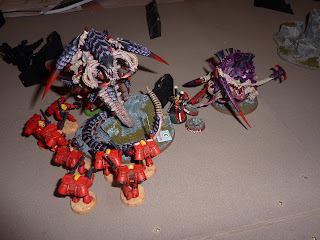 Turn 4
The Carnifex charged into the melee but was quickly dispatched by the rampant librarian. The Trygon avenged his death but took another wound. The rest of Matt's army (including the outflanking Baal Predator) with nothing left to shoot moved in ready to bring the beast down should their comrades falter.
Turn 5
The Trygon wiped out all but one of the assault squad in Scott's turn and finished the job in Matt's using its consolidation move to bring it closer toward the terminators.

Turn 6
The Trygon hurled itself into combat with the terminators killing two. Unfortunately the combined weight of the remaining power fists was enough to bring it down and with that the game ended.
Final Result: Matt killed all 1250 pts earning him 6 KP. Scott killed 635 pts and earned 2 KP.

Conclusion
So the Blood Angels successfully purged the Tyranid infestation from the planet but it never really seemed like it would be anything but a convincing win for them. Obviously this being Scott's first game with this army (and he hasn't played that much 40K before either), he was always going to make some mistakes.

In this instance I think the decision to keep his genestealers in reserve made the first turn very simple for Matt as he could focus all his fire on the Hive Tyrant which was looking to only suffer a single wound from all that firepower. The Dawn of War deployment hampered Scott greatly as his slower units were never going to trouble the Blood Angels. The fact that they were spread out made it even easier for Matt to systematically pick them off.

Mephiston was by far the most valuable unit in Matt's list. The guy took down 12 genestealers and a carnifex and wounded the Trygon. He did all that despite struggling to use his powers to great effect and even took a wound from their attempted use. That initiative of 7 really paid off as it meant he struck first even against the genestealers. Credit has to go to the scouts though as they took down a unit that costs nearly twice as much as them. Granted it was some lucky rolling but it meant Matt could breathe very easily. I doubt many BA players would've included them instead of more assault marines but this is a fine example of an outsider excelling itself. This is why we don't like stats armies as you never get that feeling of a weaker unit outshining other more obvious choices.
The only unit for the Tyranids that was of any real effect was that Trygon. It just didn't seem to want to die. Toughness 6 is a real bitch at the best of times but coupled with 6 wounds it's pretty formidable. The fact that he took down both Mephiston and an all but complete squad of marines is testament to how powerful it is. It was pretty unlucky not to kill more terminators as Matt was lucky on his 5+ rolls.
Having watched all this unfold I started to think about my list for the following battle. I wasn't sure how I was going to deal with the Trygon especially since I didn't have the option of fielding an I7 behemoth.....
Posted by From The Fang at 23:42:00