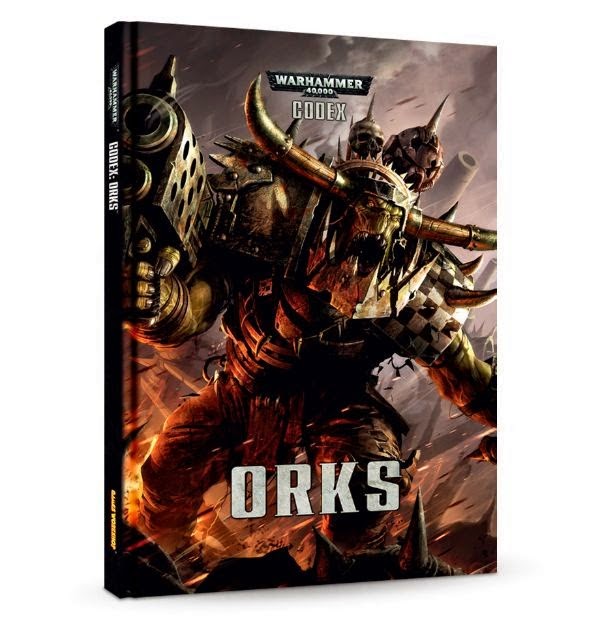 As I write this I'm looking at the eBook version of the codex only so I'll update this when I've gotten my hands on the real thing. I'll still prefer to actually have a physical book. I embraced the shift to electronic codices before they arrived but I haven't bought any since as I'm really not a fan of how they turned out. I find them pretty difficult to read and even worse to plan armies with.

First Impressions
The new Ork codex is particularly interesting because it will set out the standards of what we can expect from 7th edition books. Not necessarily for the strength of the rules but how they're arranged and what options we have. The most noticeable shift is to a Datasheet format. No longer to we get the familiar fluff entries followed by Army List descriptions. Instead they're rolled into one page which has a bit of fluff, the points and all the special rules (though not their descriptions) neatly arranged on one page. I have mixed emotions about this move. For starters it's a shame to see the unit specific artwork vanish although I know some had complained this was reducing in quality anyway. We now just get a picture of the painted models, which is perhaps to protect IP as much as anything?!? Either way I'm sad to see the artwork go.

The other thing with Datasheets is it feels like a lot is crammed onto one page. I'm sure in the iBooks version the rules can be tapped to find out their description but in the eBook, no doubt real book, you need to flick back and forth to understand a unit. The other issue is that the whole page entry means you struggle to compare the units within an FOC slot and which slot a unit falls into isn't as clear (there's just a little symbol). Again, this may be deliberate as we move away from the conventional methods of list building but I still find it a bit clumsy.

As before we've got a set list of Wargear at the start of the datasheets which means yet more flicking back and forth. I'm also disappointed to see such a short "eavy metal" section (as it used to be known). There's basically just some Bad Moons and that's it. Frustrating for those of us who want inspiration in painting other colours but I suppose that's where Warhammer Visions, White Dwarf and the painting guides come in.

Anyway, it's not all bad, we're still treated to some stunning cover art and (presumably) the same quality of finish we've come to expect from the hardback books. In the eBook version at least all of the rules and profiles have been shifted to the back of the book for easy access which I hope carries through to the hardback.

Army Wide Rules
Waaagh! - now requires a warboss of some description and only your warlord at that. This means he needs to survive long enough to declare it (which is at the start of the turn now). Worth bearing in mind for Ork players and their opponents. Affects all models with the 'Ere We Go! special rule. Basically it's been restored to its former glory and once again allows Orks to both Run and Charge in the same turn but there's no penalty for rolling a 1 to run (other than barely moving!).

'Ere We Go! - gives a kind of mini-fleet to pretty much every unit. Combine this with a Waaagh! and you can cover an impressive distance when trying to get into combat. When you consider charging through terrain has changed too with 7th the Orks will find it much easier to get into combat.

Mob Rule - there's A LOT of whining going on across in the interwebs right now about the changes to Mob Rule. To those unfamiliar with it the old rule used to allow units to use their model count as their leadership with units of 11 or more models becoming Fearless. The new rule has abolished this but before we get too carried away calling it a nerf let's look a bit closer.

The vast majority of Ork units have Ld7 which means they'll pass an unmodified morale check around 60% of the time. Should they fail though, they now roll on a table. A result of 1 means they run (or are pinned) unless they're in combat (where you'd hope they'd be) in which case they stay put. On a 2-3 it fails unless it has a character (either Character or Independent Character) in which case it suffers D6 S4 hits but passes. Finally on a 4-6 it fails unless it's got more than 10 models in it, in which case it suffers D6 S4 hit but passes.

Basically if you've got a unit that's got more than 10 models including a character and you're in combat you aren't going anywhere (i..e you're Fearless) but you might lose a few boyz. If you've say just got a unit of 11+ models but you're not in combat and don't have a character then you'll still only run 50% of the times you fail a morale check. That's almost as good as a re-roll.

Think of it as Daemonic Instability for Orks, it isn't quite as good as you aren't Fearless most of the time but you're still not very likely to fall back. Is it as good as before? Actually not so easy to tell. On the one hand those big mobs aren't permanently Fearless but on the other hand smaller mobs might be more survivable. Realistically it's slightly worse though.

Warlord Traits - a pretty good selection making your Orks either Fearless during a Waaagh!, giving them a 12" morale re-roll bubble or run/charge re-roll bubble. Also in there is a re-roll for the Warlord for to hit/wound or his saving throw. Finally the warlord can get +1S. There's only really one there that has a huge benefit to the army as a whole and you need to roll a 1 for it! Not so vital during the Ork turn as they'll be charging during a Waaagh! but handy during the backlash in your opponent's turn.

Stikkbombs - not really a "rule" as such but it's worth noting that pretty much everything except Painboyz and Weirdboyz now comes with stikkbombs as standard. Before only Meganobz, Kommandos and Stormboyz got them. Boyz could always take them but paid 1pt for them. Effectively then boyz are 1pt cheaper. I'm not saying everyone always used to give their boyz stikkbombs but now they're getting them included in the cost. More on that when I come to boyz though. Anyway, what this means is you're nearly always striking at Initiative. Of course that's I2 most of the time (since Furious Charge isn't what it was) but that does at least mean your boyz will hit before power fists and the like. Not a drastic change then but certainly worth mentioning here.

Rokkits - again not really a rule but the cost of rokkits has come down significantly. All trukks can now take them for free and why wouldn't you since the big shootas weren't helping you much. Orks didn't need help dealing with infantry. Pretty much every unit that could take rokkits can now do so for less. Expect to see more thrown in to boyz units and onto trukks. Not sure we'll see that many trukks mind you, but more on that later.

And Finally....
I couldn't write up my first impressions without mentioning that Lords of War and Formations will now be printed up in the codices themselves! That's big news. With the changes to Destroyer weapons it perhaps isn't such a big deal any more and frankly I'd love to see more Stompas but I can't for the life of me think why Ghaz is now a Lord of War (despite being weaker - more on that). There's a worrying precedent there. Will Logan Grimnar and Commander Dante suffer the same fate? Mind you it does allow them to be taken alongside other HQs.

Conclusion
I'm not going to pass judgement on whether I think the book is good or not until I've reviewed things properly. If you want my knee jerk reaction I don't think it'll end up being much different from the old book on average but perhaps I'll discover some gems.

I can't promise the unit reviews will come as thick and fast as they usually do but I wanted to get something up in the midst of my supposed hiatus!
Posted by From The Fang at 17:00:00