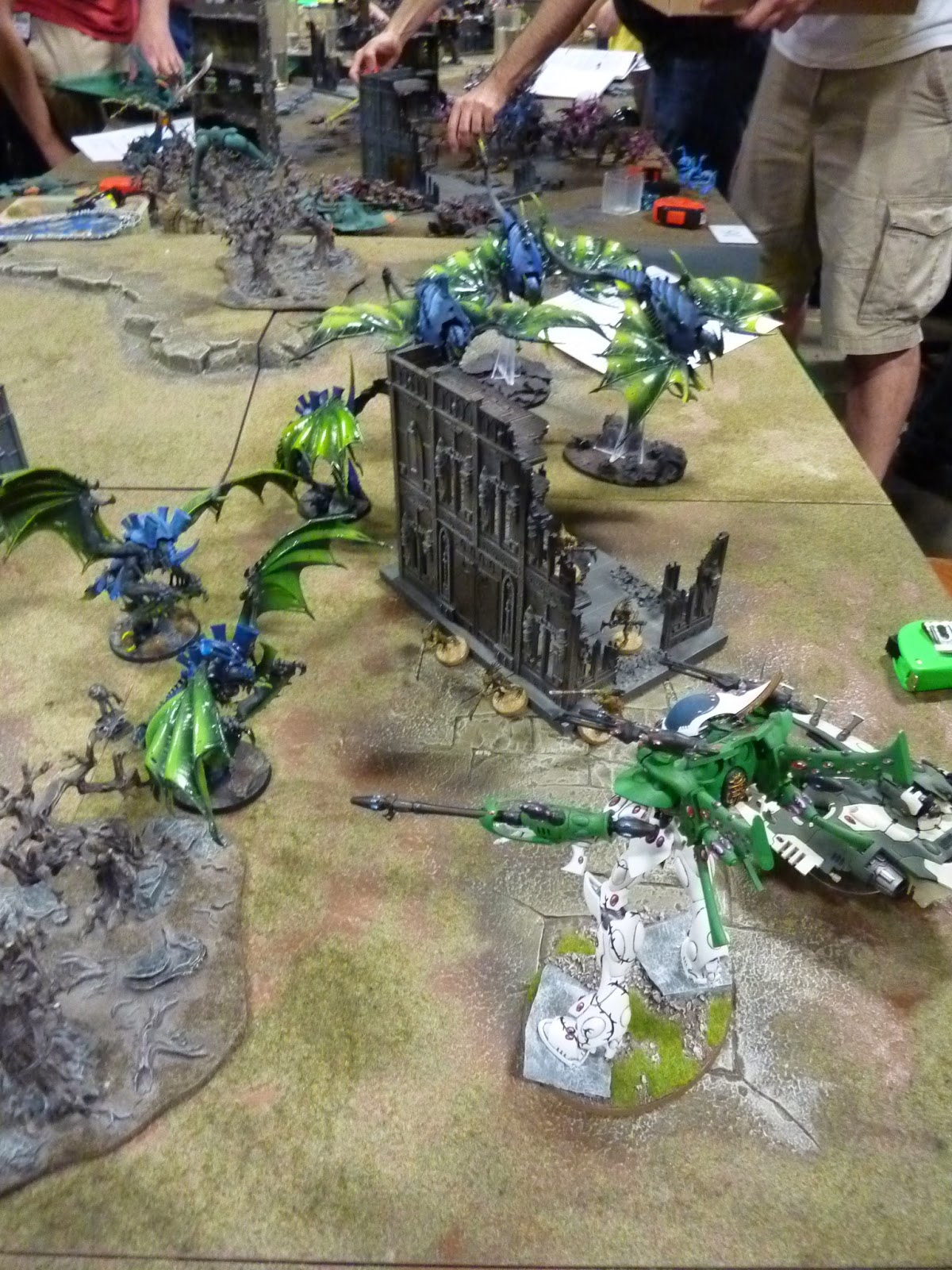 We're starting to lose count of the times we've been to Battle Brothers (formerly Doubles) now. It isn't without its faults but generally speaking the atmosphere is good and you meet some great people. Doubles is a fantastic format and it's a shame there aren't more events available. This will actually be the last Battle Brothers this year as WHW is closing for refurbishment for a good while. This is our first tournament of 7th edition and the first where we're likely to come across Super Heavies and Forge World.

Sadly, with GW putting the ticket price up year on year (although this time they've dropped a meal and charged less) the numbers have been dwindling. This time there were only 48 teams when in the past there's been more like 150 teams. Even so there was a fair selection of armies. I counted over a dozen Imperial Knights with a couple of lists having more than one and one army being knight only. There were also two Warhounds (who ended up playing each other), a Revenant and a Transcendant C'tan amongst others. Fortunately during the first day we managed to avoid such nonsense.

We were running a slight variation of our Ghostly Tides list with a new name. We'd got a commander with two crisis suits all with missile pods and four marker drones between them, two riptides, two units of kroot, a spiritseer with d-scythe wraithguard in a serpent and a wraithknight.

Game One - Ripped Tights vs. Tyranids 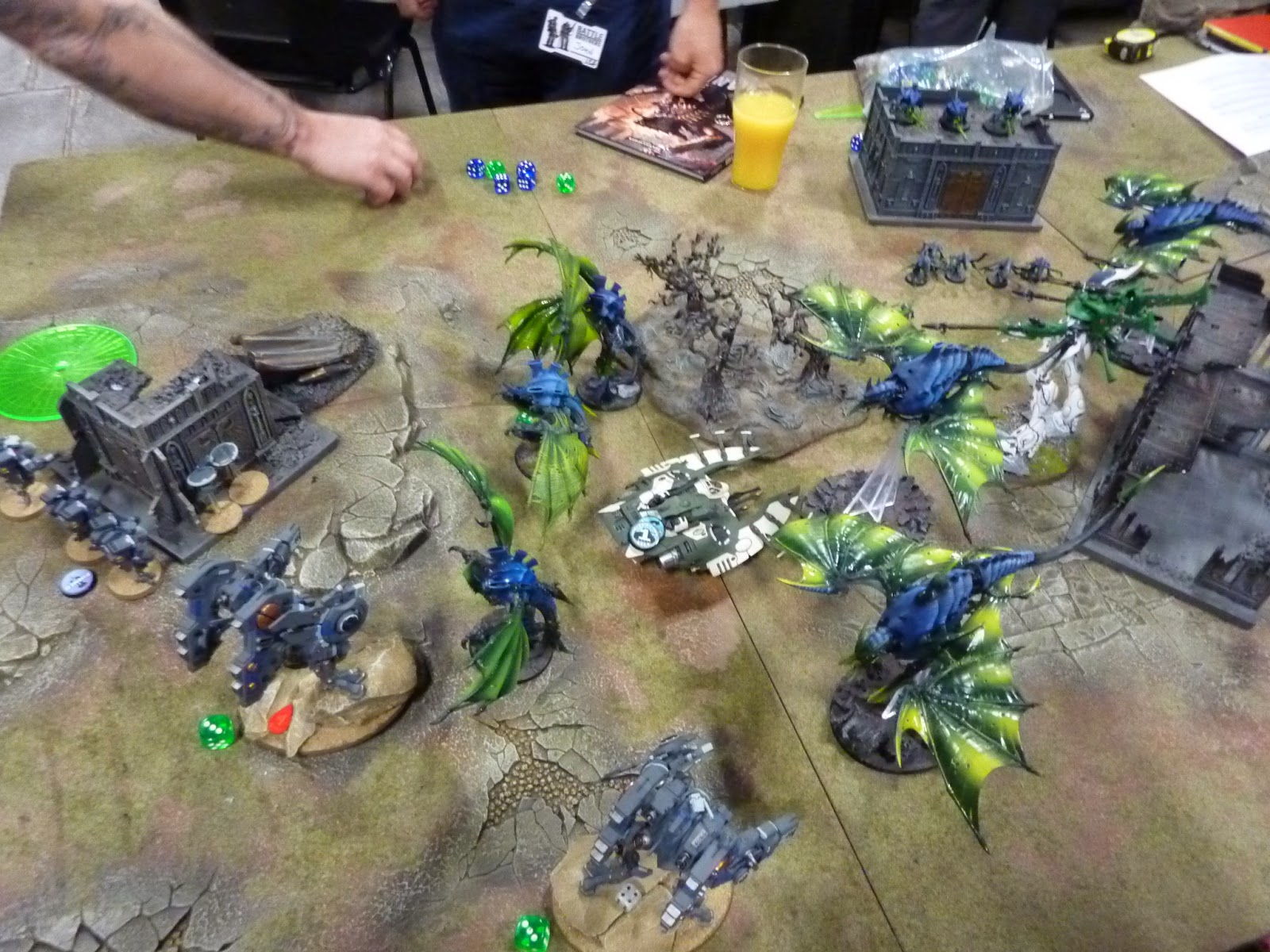 Our first opponents were John and John who were running Tyranids with a Skyblight formation. I've never come across this before but it's basically a flyrant, harpies, crone and three squads of gargoyles (who get Objective Secured). This was joined by another couple of flyrants, warriors and genestealers. We'd be playing Relic with Vanguard deployment.

We ended up going second which meant everything was in the air in our first turn. We infiltated some Kroot which soaked up a decent amount of fire but eventually died for First Blood. This did mean our Wave Serpent survived though but losing FB in Relic is never good. The first few turns of the game were pretty bloodless with our first two shooting phases only causing a single wound. We'd forgotten that Grounding Tests are only taken when wounds are caused which messed up our plans significantly. Had we realised we'd have focussed fire more and positioned the Wraithknight differently. Ah well. 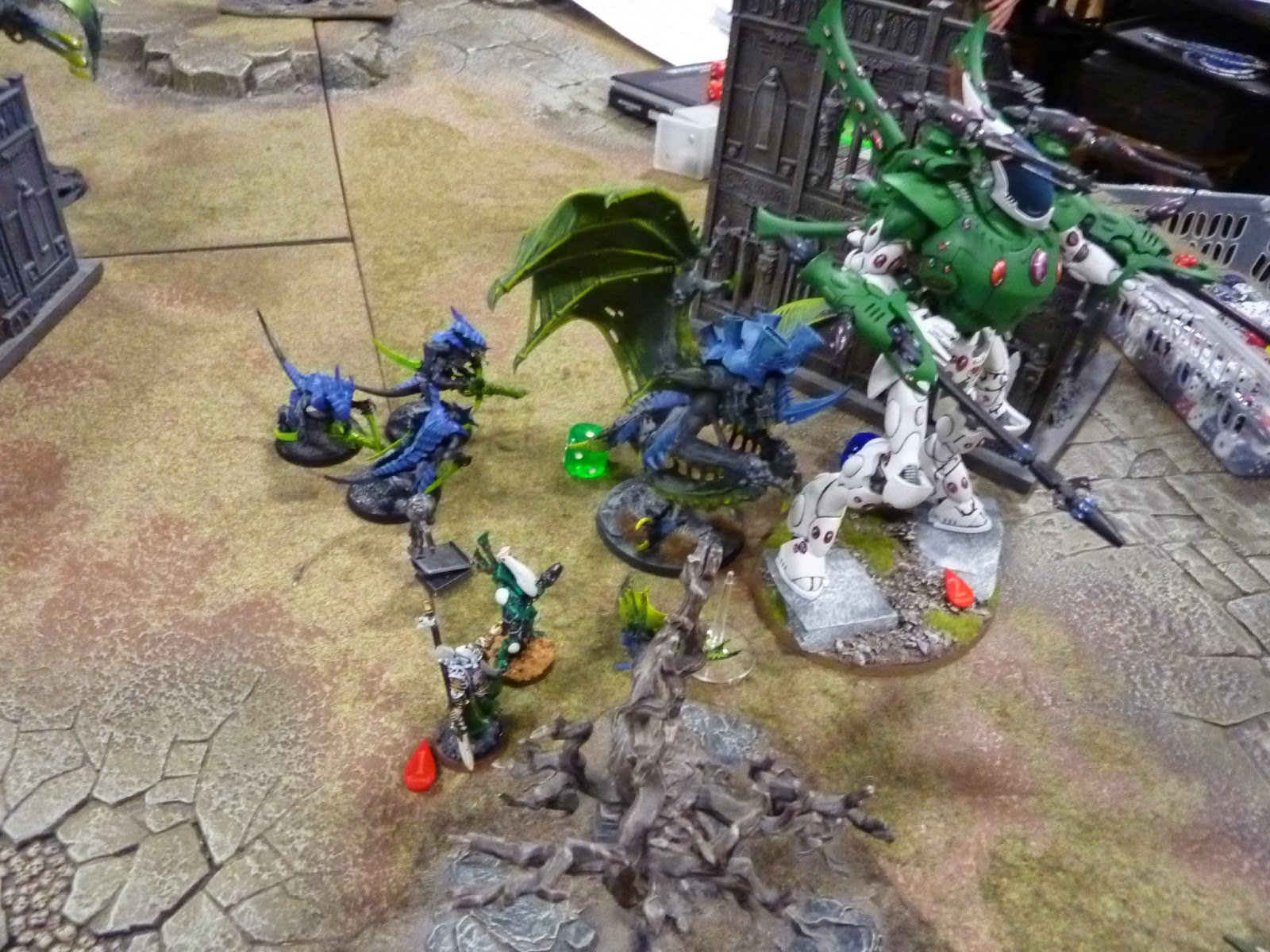 Eventually our opponents decided to land with all of their FMCs and that's when tables started to turn. The crisis team killed a crone and the Wraithknight charged a couple and easily instant killed them. The riptides were massively underwhelming (although they did fall victim of Paroxysm). They failed to cause many wounds at all which was partly due to FNP on their part and some disgustingly good Jink saves. Even so the flyrants were fairly unscathed thanks to poor Riptide fire. Luckily for us their gargoyles mishapped meaning they only had one unit of them near the Relic. We ended up with the Wraithguard contesting it with the Warriors. The riptides had a chance to redeem themselves by getting us Slay the Warlord but despite wounding 5 times (with only 3 wounds left) the Tyrant had the Warlord Trait that gives him FNP and he passed all 5!!

The game ended with neither of us having the Relic but they'd got all three secondaries and we'd only managed Linebreaker with some Kroot. A 3-1 loss to start the day is never good but thankfully with it being Relic we'd only missed out on 5 VPs. Still, it was an incredibly frustrating game as their rolling was amazing and our turns were short in comparison making us feel like spectators a lot. Nothing against our opponents though who were great. 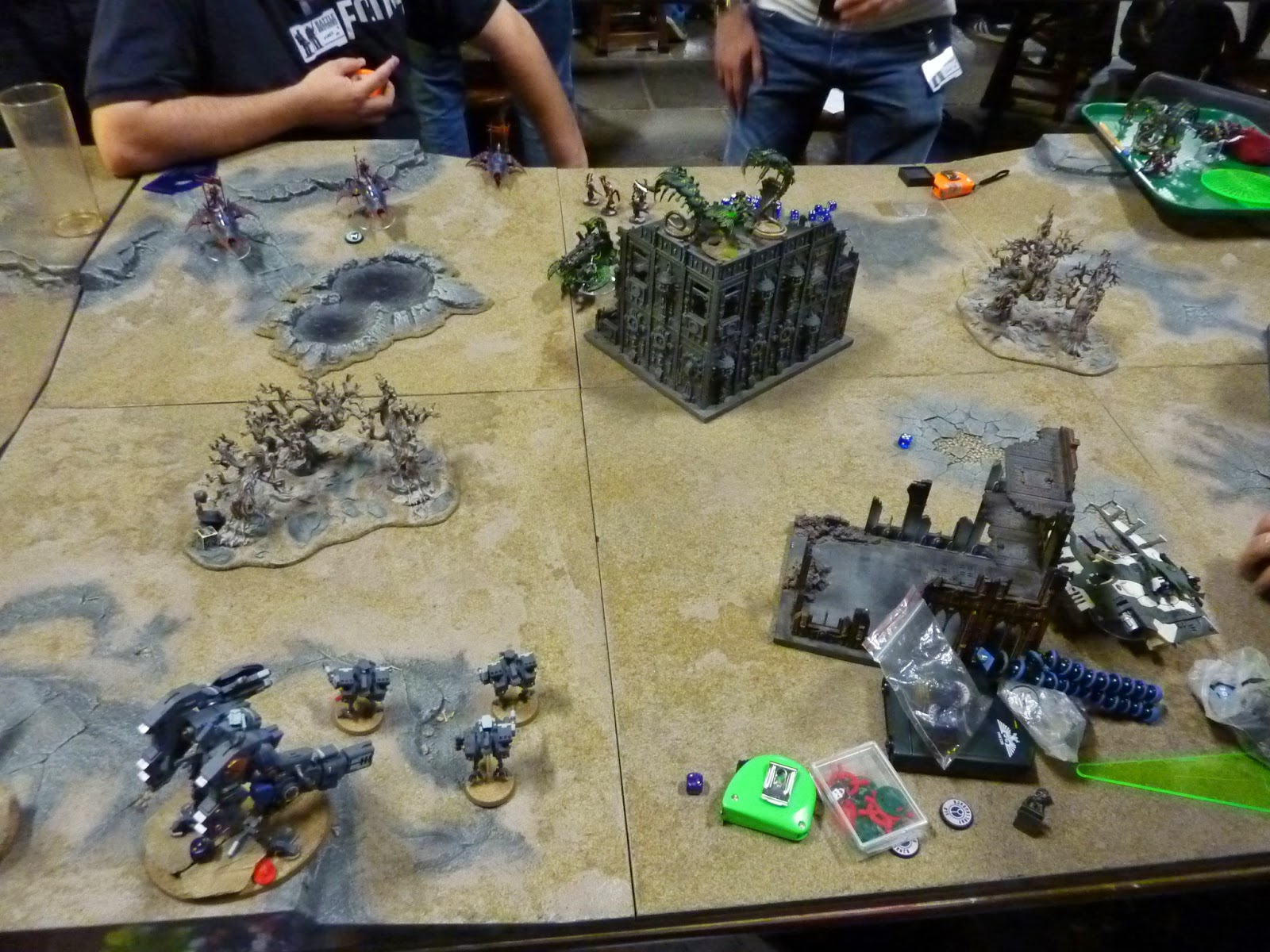 This was a much better matchup than our first game. Our opponents #### and ### were running Drazhar with 3 incubi in a venom, two venoms with 5 kabalites, two lots of 3 reavers, two night scythes with warriors, a destroyer lord with wraiths and an annihilation barge. We'd be playing Big Guns Never Tire (4 objectives) on Dawn of War.

Our opponents won the roll off but gave us first turn. They had a central piece of LoS blocking cover so we split our force on the flanks so that there'd be few places to hide. In the first turn we were able to kill a couple of wraiths and Drazhar's venom (for First Blood). Our opponents struggled to do much in response and the wraiths moved into the central ruin for cover. We had repeated attempts to destroy the annihilation barge but despite penetrating it several times it managed to Jink. The commander and his team dealt with the rest of the venoms. The kroot came on and slowly moved up to claim two of the objectives. 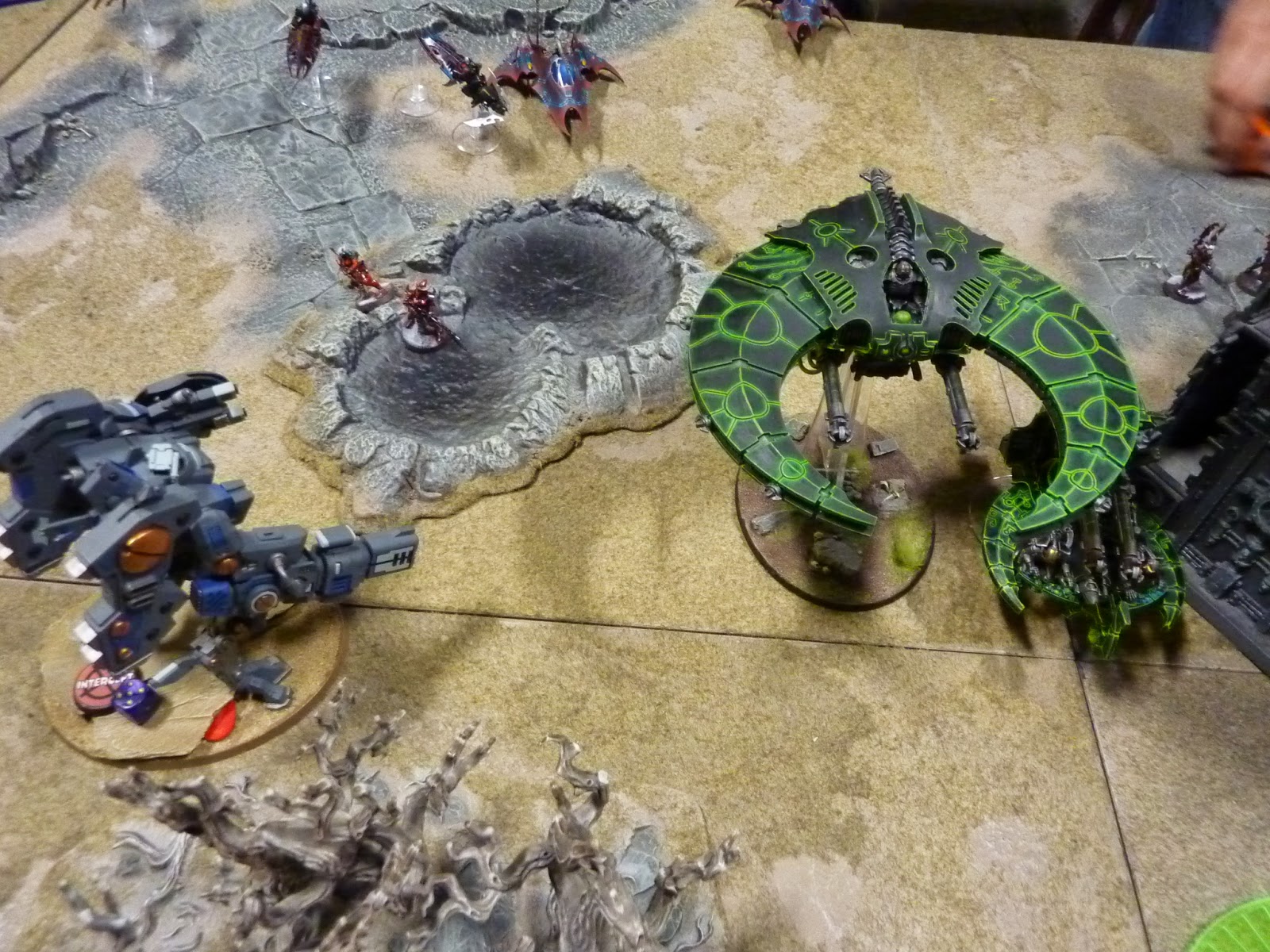 Their flyers arrived one at a time allowing us to force them to Jink with the Riptides. Even so, the combination of the flyer and the barge killed off the commander and his team. The Riptides slowly picked off the Dark Eldar but when presented with an opportunity to pie plate Drazhar and his incubi the weapon got hot despite having a re-roll! The Riptides were then reduced to charging the Reavers to kill them off. 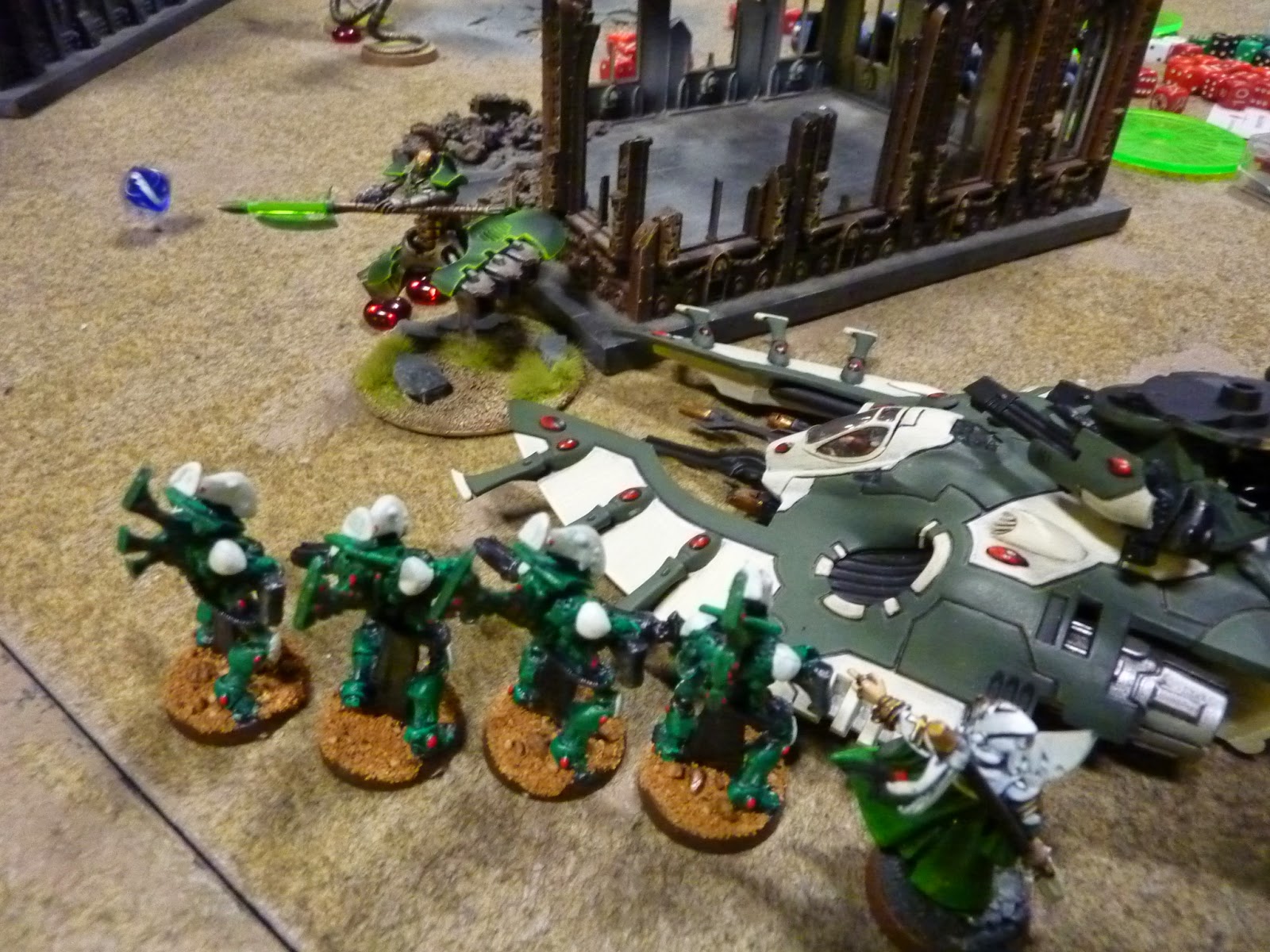 Meanwhile in the centre the wraiths were left with only the wave serpent to charge and once it was wrecked the wraithguard punished them by kill most of them off with their d-scythes. The Spiritseer was pretty impotent though having rolled terribly on Runes of Battle. The wraiths attempted to charge the wraithguard but wall of death meant they were wiped out, although the lord got back up. The wraithguard charged into the annihilation barge with the Spiritseer making up for his lack of psychic power by killing the barge before being charged by the lord and some nearby warriors. Miraculously the seer passed his Mindshackle test and killed the lord with the rest of the squad sweeping the warriors.

The wraithknight killed of Drazhar in combat and this pretty much wrapped up the game but the central objective was contested by two Objective Secured units (wraithguard/necron warriors). This gave us the other three though and all three secondaries. We should've also scored a bonus point for the annihilation barge but we forgot! 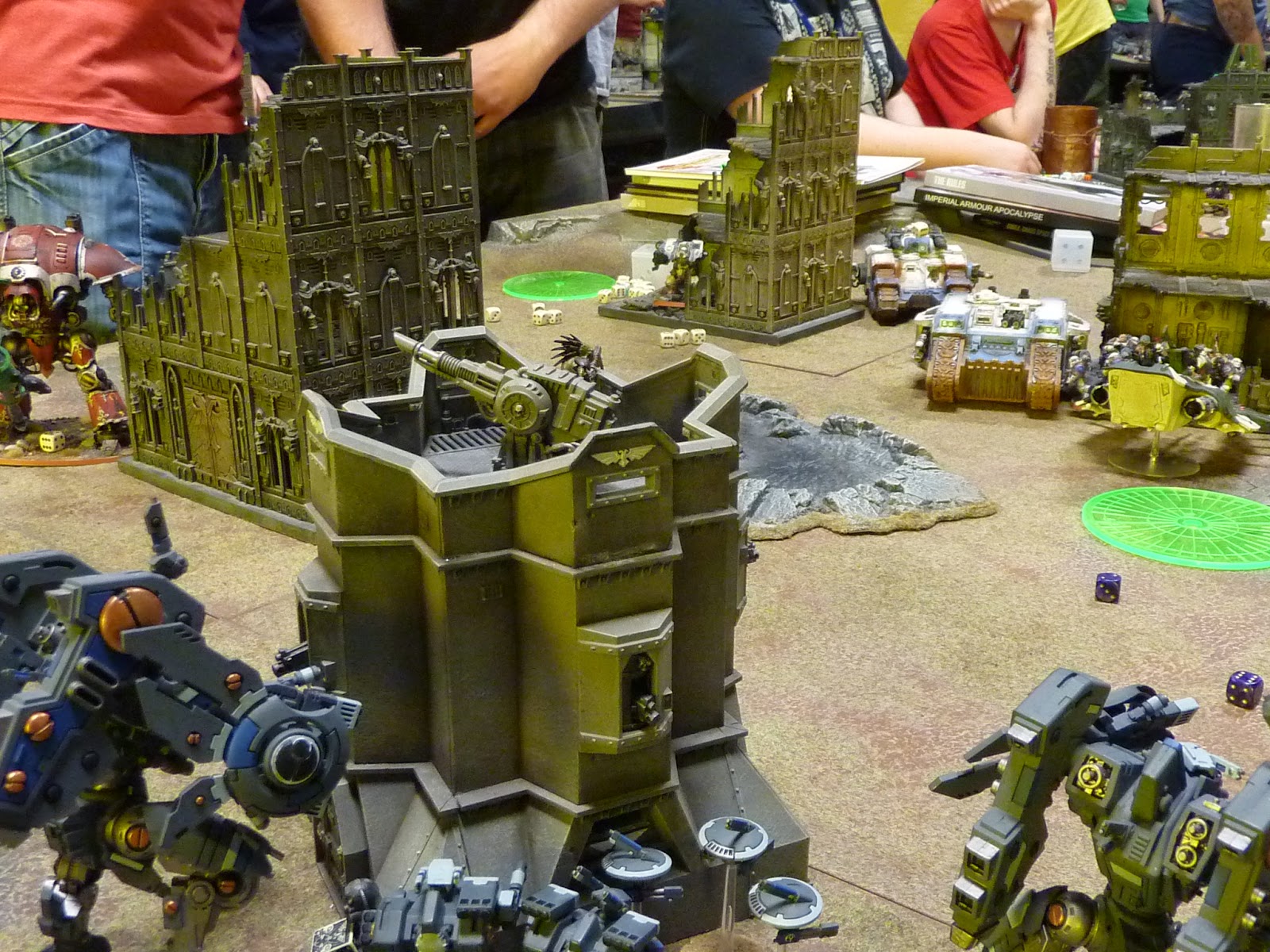 Our opponents had a pre-heresy World Eaters force which they were playing as Carcharadons. The whole army was stunning to look at which always makes for a better game I think. They were running a mortis dread, rapier platform, land raider with captain and tactical squad, rhino with tactical squad, a sicaran battle tank and an Imperial Knight. We were playing Emperor's Will on Hammer & Anvil.

The wave serpent fired on the rapier and amazingly managed to kill it off for First Blood. The riptides set up to use their Ordnance blasts on the landraider (to clip the rhino too) but one was Pinned thanks to their Warlord Trait. The Imperial Knight set up to go for the wraithknight and this allowed us to play keep away from it for the whole game. We got a couple of penetrating hits on it but could only score 6 on the damage table each time. Eventually on turn 4 we knew we couldn't outrun it anymore so we set up to charge with the wraithknight who took it out before it could strike back. 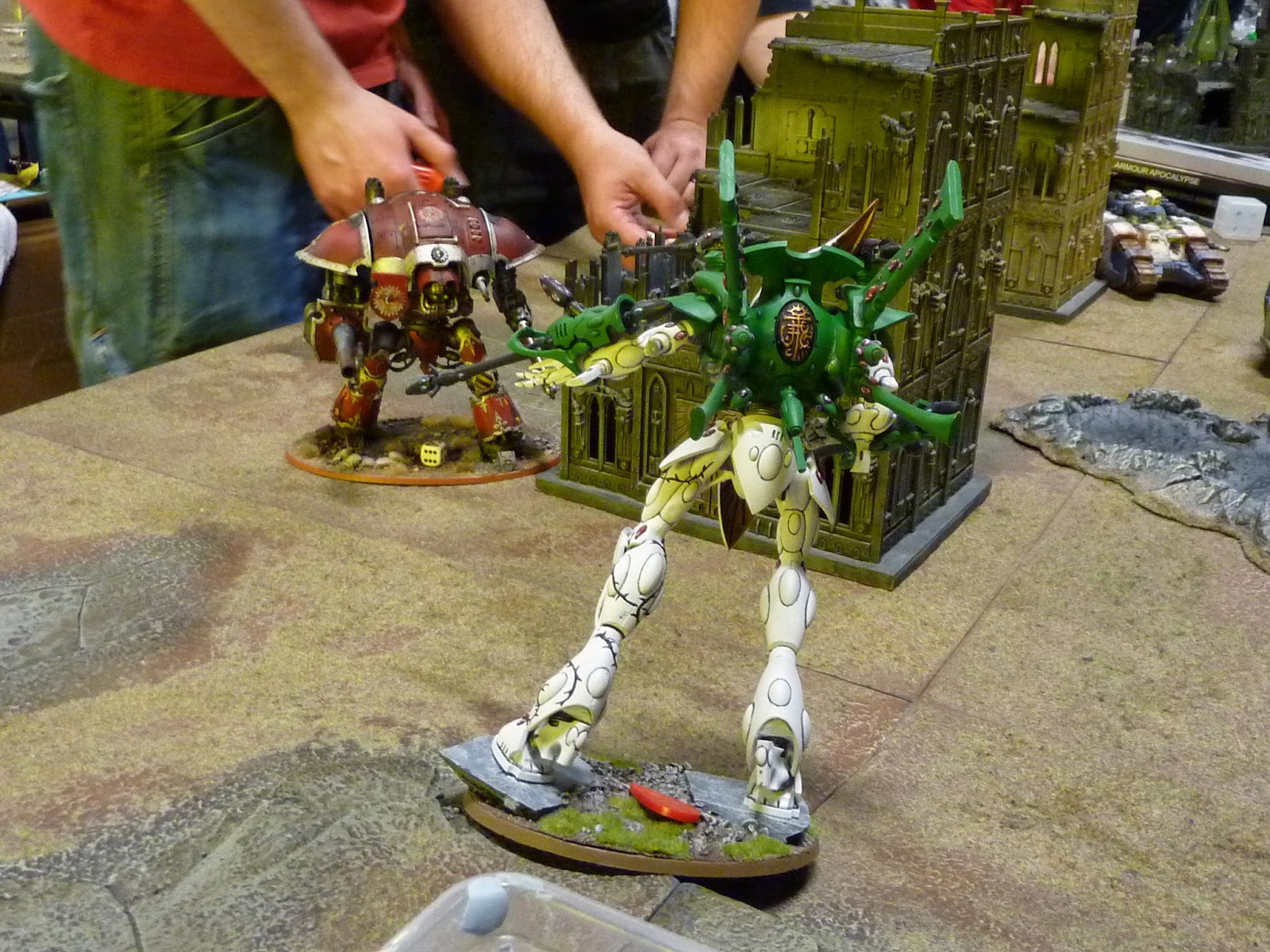 Elsewhere the commander and his team down the dreadnought. The wave serpent advanced at full speed to get the wraithguard near their objective and more importantly their troops. The captain and his squad jumped out of the land raider and were subsequently wiped out by the wraithguard's d-scythes. The kroot came on nearby too but were wiped out over a couple of turns without doing much. The other kroot were holed up in a dilapidated building in our deployment zone holding the objective. 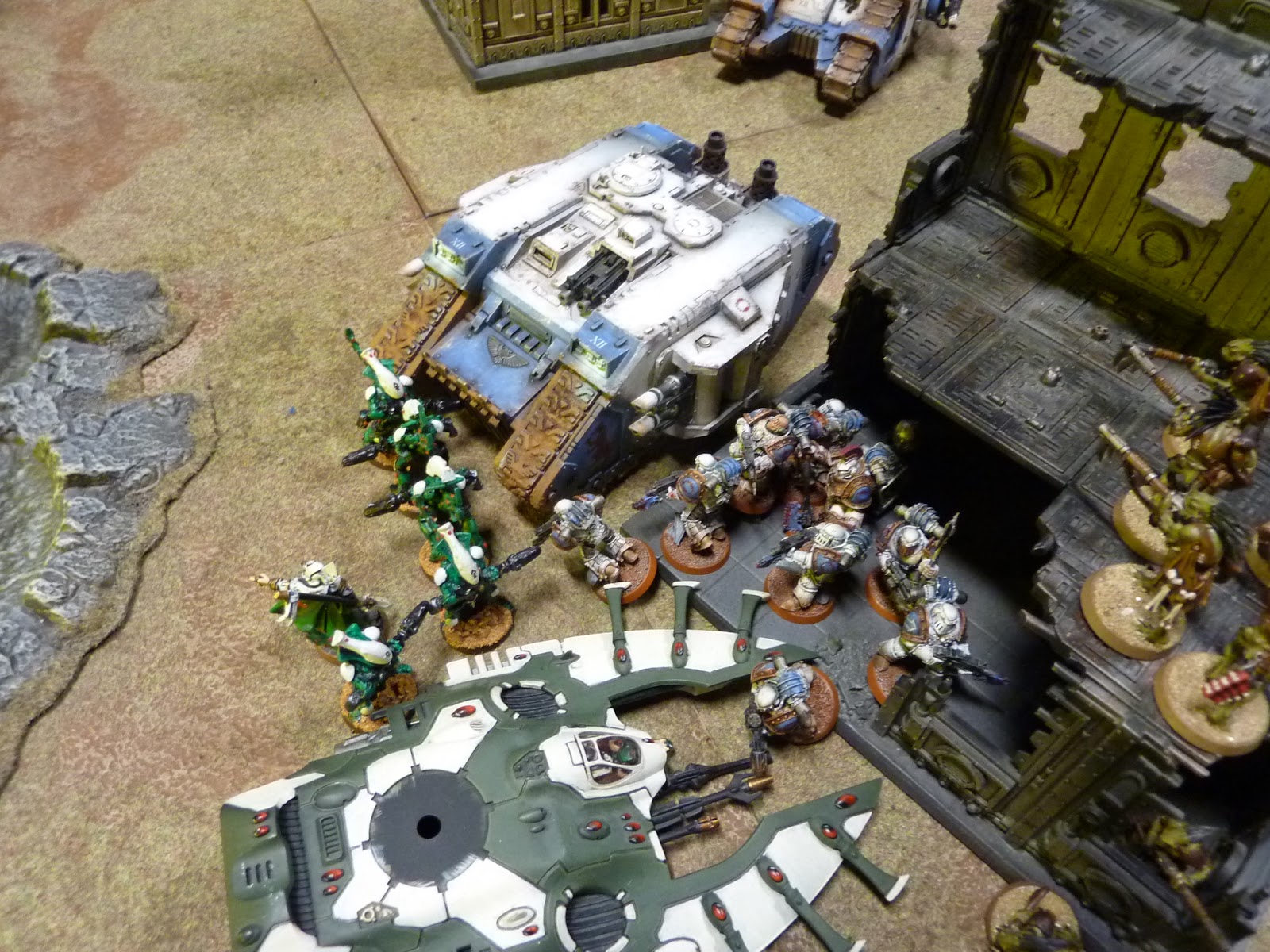 The riptides were yet again subpar with lots of getting hot, failing novas and generally underperforming. The crisis suits were great again though being able to strip hull points from the Sicaran and bring it down. The squad in the rhino were gunned down by the wraithguard and the crisis suits combined so that at the end of turn 5 they only had the land raider, a couple of marines and the rhino left. The crisis team dealt with the rhino and marines whilst the wraithknight charged the land raider and finished it off to make it a tabling. With both objectives and all three secondaries we took a 9-0 win. 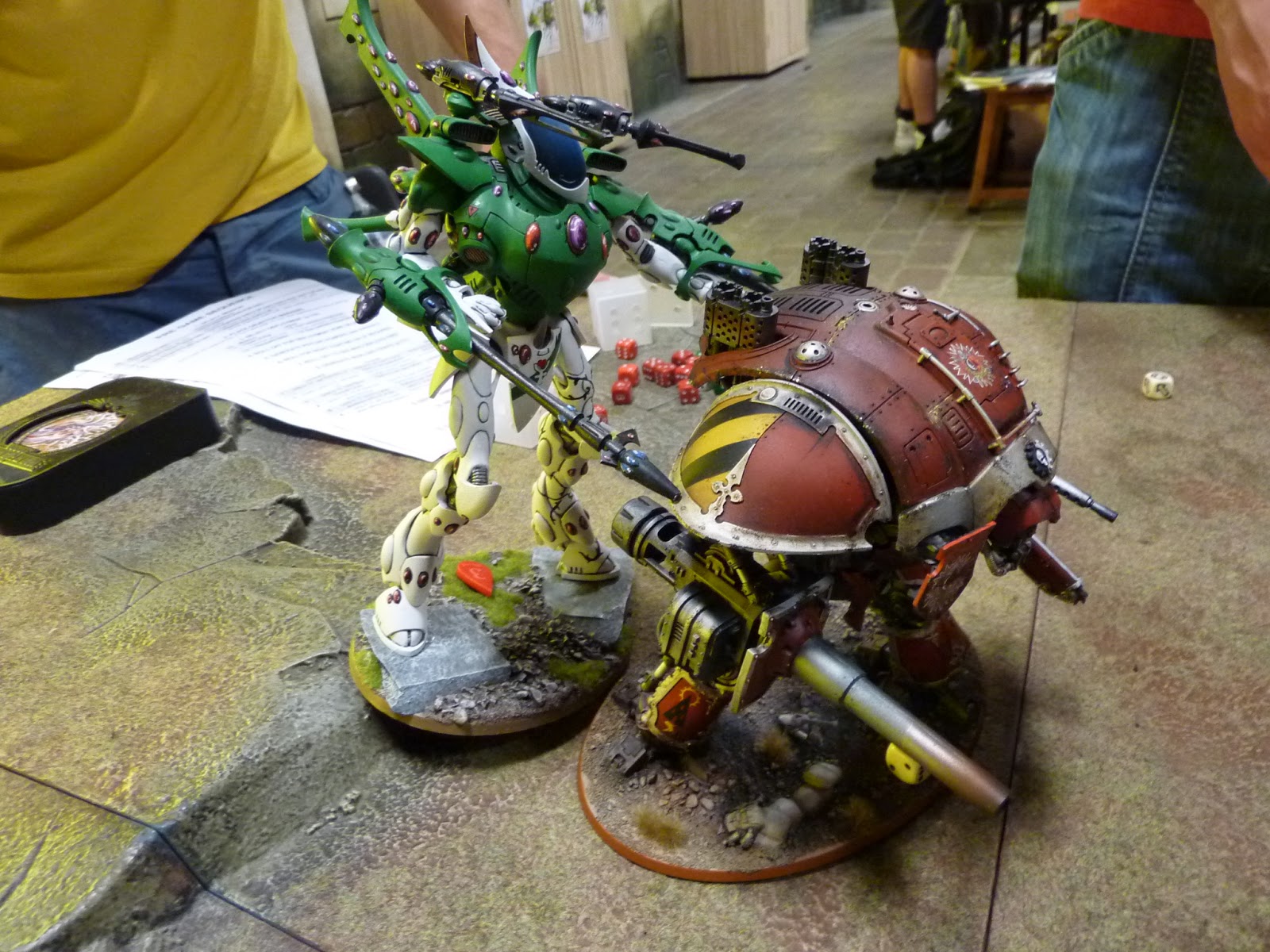 Can't really complain at that start to the day. We dropped quite a few VPs in the first game but made a good effort to recoup those in the other games. As ever a lot of it comes down to what you're paired against and with random allocation it really is luck of the draw.

The stars of the day had to be the wraithguard and spiritseer. He did little with psychic powers (although shrouding was useful in game 3) but taking out the wraiths, lord and annihilation barge in game two was probably match winning. The crisis suits and wraithknight would be a close second but the riptides were terrible on day one. Let's hope they can redeem themselves on day two.
Posted by From The Fang at 17:00:00