Right then, onto the meat of the codex, the unit entries. As I've mentioned things are different now as each unit has it's own datasheet. Can I say right now that I hate that term? Anyway, the datasheets give the unit's fluff and army list entry on a single page. I'm beginning to wonder what the 108 pages of the codex is made up of to be honest. Once I get my hands on a physical copy I'll write about it but at the moment I'm not really sure what the rest of book will be made up of since there's only a limited 'eavy metal section.

Combined Arms Detachments
I'll come to them in more detail later but it's worth remembering that an "Ork Horde" Combined Arms Detachment (CAD) allows for three HQs to be selected as long as you also have three troop choices (shouldn't be a problem for Orks!). Also worth mentioning is that using that CAD doesn't give your troops Objective Secured like the regular CAD does. It does give you Hammer of Wrath when you roll 10+ to charge though (not especially likely even with the 'Ere We Go re-roll - 30.6% if you care).

Either way this is an interesting change for GW. I've often wondered if they were going to go this way as they used to talk about the standard FOC as if there were going to be more options (outside of Planetstrike etc). I'll be interested to see what the other new codices get, especially Dark Eldar. I expect the SW one to be 4 HQs to reflect the current codex. Anyway, onto the options for HQs. 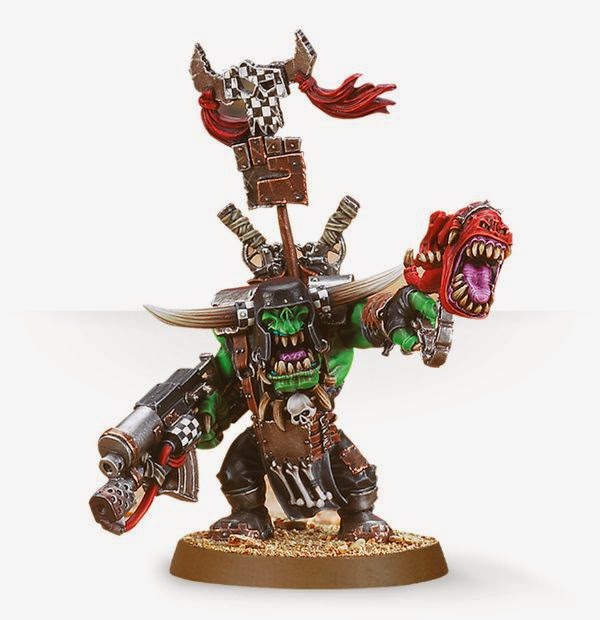 The most important thing about the Warboss is that he's the guy calling the Waaagh! Without him you can no longer call one. You're pretty much always going to want to do that too as the effective charge range it gives you is pretty scary when combined with 'Ere We Go! Sadly he no longer allows a unit of nobz to be taken as troops but if you're running an Ork Horde detachment that literally makes no difference at all. Obviously in a regular CAD it matters but whatever, it isn't worth crying too much about.

Otherwise he's pretty much the same as he always was. It's now significantly cheaper to mount him on a warbike and with Wazdakka gone you can use Gazbag's bike to make an almost replacement for only slightly more than the normal bike. It might also be worth considering Da Finkin' Kap for the extra trait and Da Dead Shiny Shoota could be a bit of a laugh and almost effective for the points.

It's a shame in some ways that you feel forced to take a warboss. From a fluff point of view I suppose it makes sense but I kind of resent the feeling that I have to take something for my army to work. Mind you, with the changes to Mob Rule you probably wanted one anyway and as HQs go he's pretty cheap. 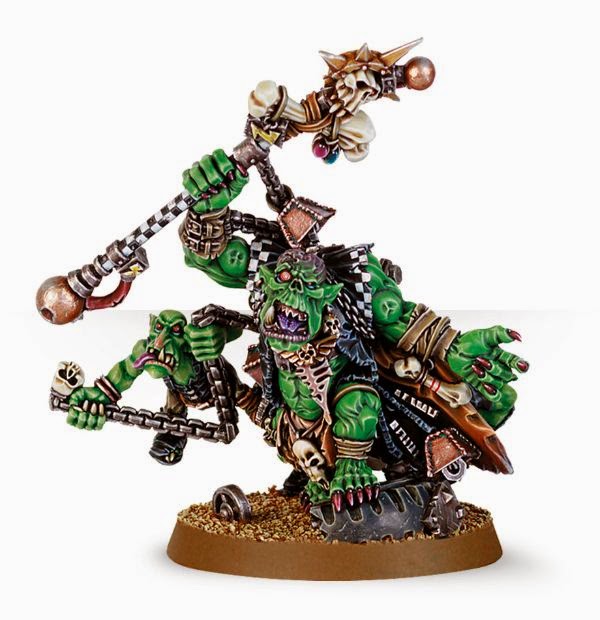 Weirdboys are not only cheaper but they also cost less to upgrade to ML2 (which is no longer called Warphead). As before they can't take wargear of any sort so it's a pretty easy choice to include one or not. His staff is now a force maul basically. I'd always be upgrading them to ML2 to give you the best chance of getting the powers off but their total cost is low. Their low leadership does make them risky for Perils but unless you're going for Daemonology that shouldn't be a huge problem. Again this is interesting as we're seeing that Daemonology is a formal option in the codex alongside the Ork powers.

Speaking of which, Frazzle makes a nice little Primaris power (although it lost pinning) and you'll probably be getting it for free from Psychic Focus. I just don't think it's worth dabbling in Daemonology with such low leadership. 'Eadbanger is no longer a negative effect power and is actually fairly potent. Otherwise the powers are fairly similar. Da Jump is the new name for the old 'Ere We Go and Killbolt is like Zzap but a beam, only 18" range and WC2. Warpath is identical really.

There are two new powers (both of which are WC2). Power Vomit is a S7 AP2 template (always nice) and Da Krunch is a Large Blast with 2D6 strength and the potential to keep doing damage.

All in all I think the weirdboy still looks to be a lot of fun to use. Obviously he'll be limited by the new psychic rules as some armies will just shut him down easily. The extra WC he can get will help get multiple powers off though against armies without much in the way of psychic of their own. Trouble is going to be that he'll be over looked in favour of Big Meks or Painboyz. 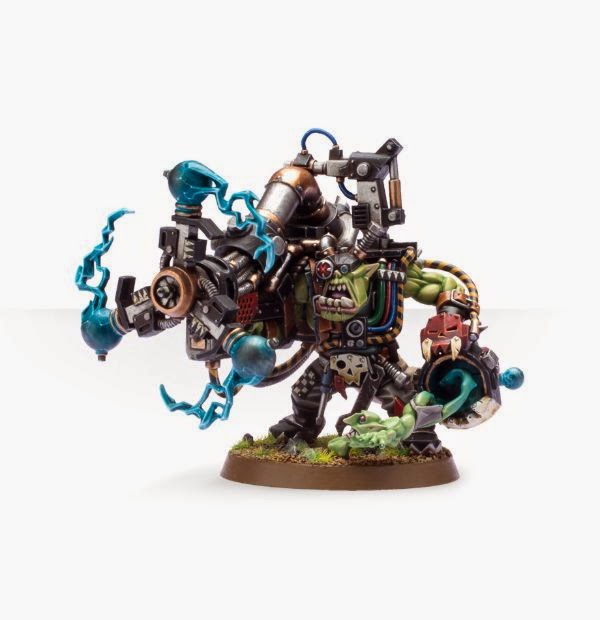 Sadly the Mek's tools are now require a 5+ to repair but they don't have the old drawback so I suppose that's a win. The KFF and SAG are both back with the SAG now cheaper. The double results have changed slightly too. A double 1 now only removes the Mek and a double 6 now creates a large blast Vortex. Worth taking just for the odd time that happens! Well that and the new model is lovely. I'm interested to see if anyone models him on a bike with an SAG though....

There's now also the option to stick him in some mega-armour and give him either a KFF or the new Tellyport Blasta which isn't bad but will probably be overlooked in favour of the KFF. The KFF now gives a 5+ invulnerable save instead of cover (screw you Tau) but only applies to models within 6" and only the vehicle if the big mek is embarked. That's quite a reduction in effectiveness in some ways but making it 5++ is great for vehicles with the amount of Ignores Cover around.

I anticipate that most armies will include a Big Mek with a KFF just like in the old days and it's probably a good plan to take Da Fixer Upperz. Stick a Big Mek in a Stompa or Gorkanaut/Morkanaut and it'll be pretty tricky to shift. You could now stick him on a bike too and have a mobile KFF bubble and with the Da Fixer Upperz he could be sorting out vehicle repairs at the same time.

Finally it's worth mentioning that he no longer allows a Deff Dread in the troops section. I don't think many people were taking them but it does make the Heavy section even more crowded. 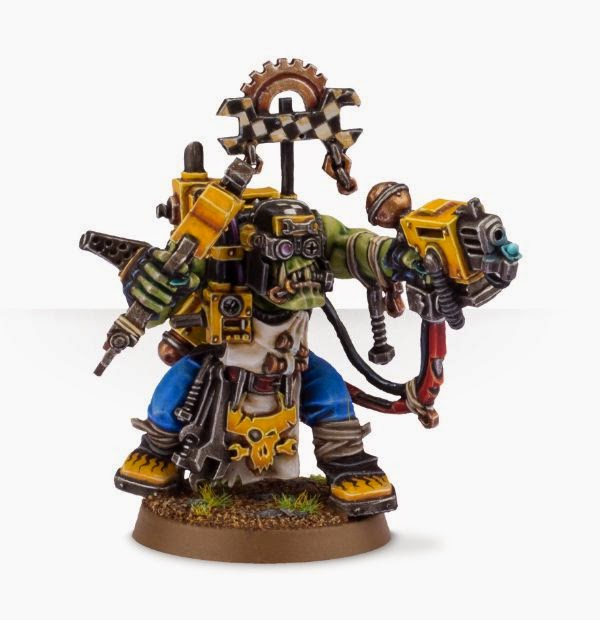 The same kind of thing as the Mek's that you always could (and still can) take in Loota and Burna mobs. The difference is you can take one for every HQ you take as an additional slotless choice. Handy to throw in a vehicle to keep it operating and a good way of getting a killsaw into a regular squad. The Kustom-mega weapons are also pretty decent being effectively S8 single shot plasma guns.

Painboy (effectively same price)
An interesting move here. You can now take a painboy as an HQ choice and include him in any squad. He was previously only available to Nobz and frankly he'll probably spend a lot of time with them now too. Great to throw one into a 30-man boyz mob though I suppose. His 'urty syringe is marginally worse due to the poison changes but otherwise he's still a solid enough choice. I can see him joining meganobz in a transport and making them extra resilient. 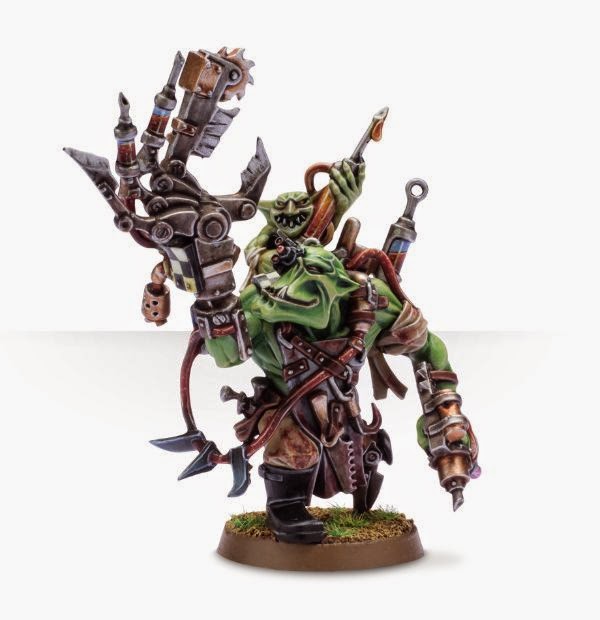 Not a lot of new stuff here. The unit that's probably changed the most is the weirdboy who no longer rolls for his powers every turn but rather at the start of the game. This allows you to plan his actions a bit better which is a big deal. The KFF changes will affect how the Mek's are used and I think they'll predominantly be giving vehicles or small units a 5++ save rather than being a central model in the army giving the 6" bubble to pretty much everything.

I have to say I'm not particularly inspired here. I think most people will be taking a Warboss and a Big Mek or two (with perhaps some Meks). I think the weirdboy will be overlooked but I'm certainly keen to have fun with him a little in my lists.
Posted by From The Fang at 17:00:00