After a poor start to the first day we pulled things back to give us a decent score of 23 VPs (out of a possible 31). Not perfect by any means but with a couple of good wins on the second day we could've been in contention. As I said yesterday, we were mostly hoping we'd avoid the super heavies and Daemons spawn lists. We'd have really liked a game against the new Orks too. 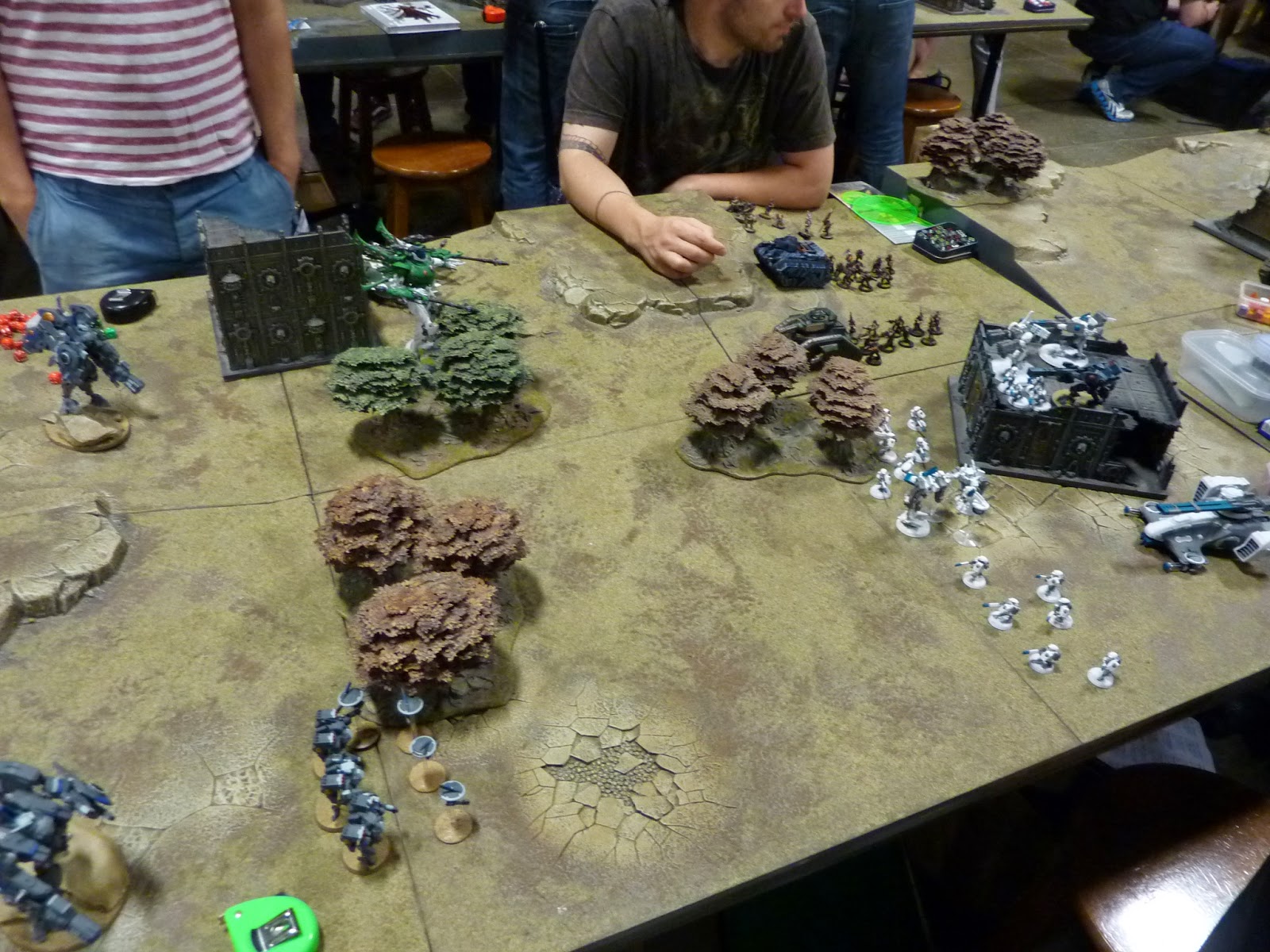 Our opponents for the first of the day's games would be Ed and Rob with their combination of Astra Militarum and Tau. Their army consisted of a commander cyclic ion and shield drones, crisis bodyguard with burst cannons, two six-man units of fire warriors, four pathfinders, Longstrike in his hammerhead, a unit of broadsides, a company command squad, two squads of guardsmen, a hellhound, Leman Russ punisher and 3 ratlings. We'd be playing Purge the Alien.with Hammer and Anvil deployment. 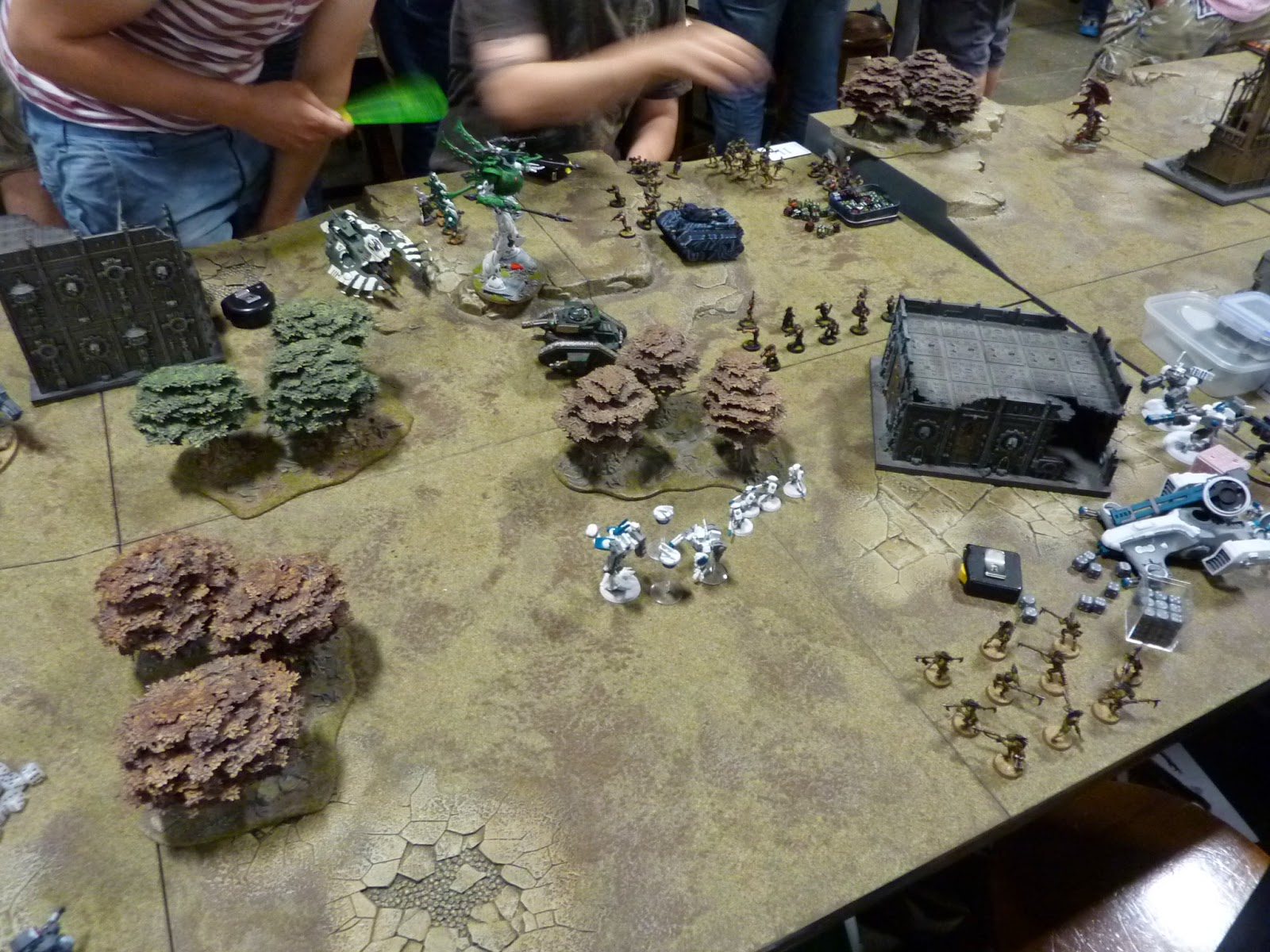 Our opponents won the roll off but we managed to Seize and turn one was totally brutal. The wave serpent managed to strip all 3 hull points from the hellhound for First Blood. This was closely followed by the crisis team stripping all 3 hull points from Longstrike. We'd have felt bad already but this was followed by the riptides double pie-plating the broadsides and hitting all the pathfinders too. With cover removed we managed to wipe out all of the suits and the pathfinders with them. Suffice to say we felt pretty shitty from the off in this game. 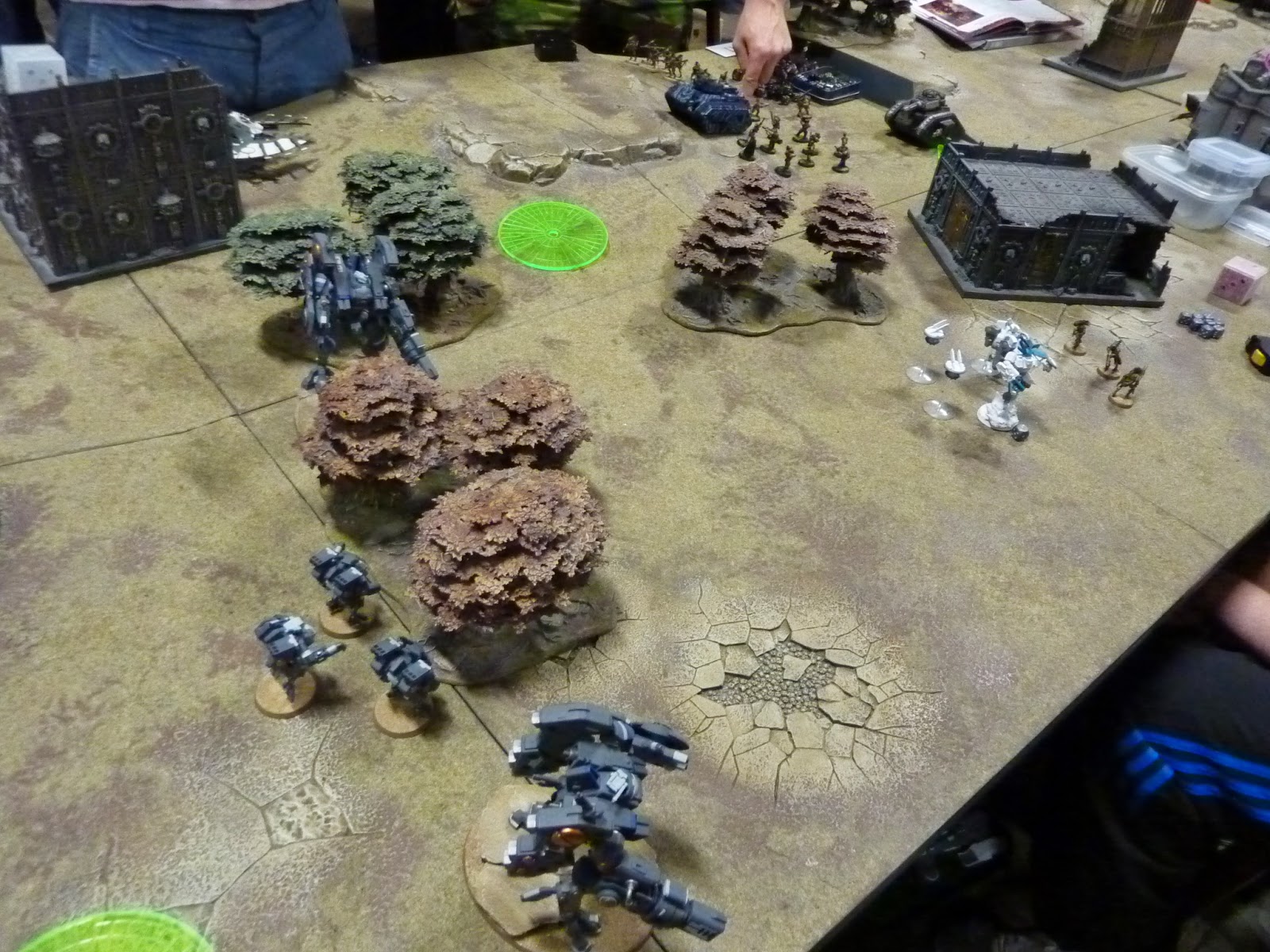 The feelings of remorse were pretty short lived though as the Leman Russ took two wounds from the wraithknight followed by the ratlings pulling something amazing out of the bag by hitting three times and rending all three times too taking the wraithknight down to a single wound. Fortunately there was nothing else to fire at him though. On the other side the commander and fire warriors killed off all of the marker drones but they'd more than done their job. 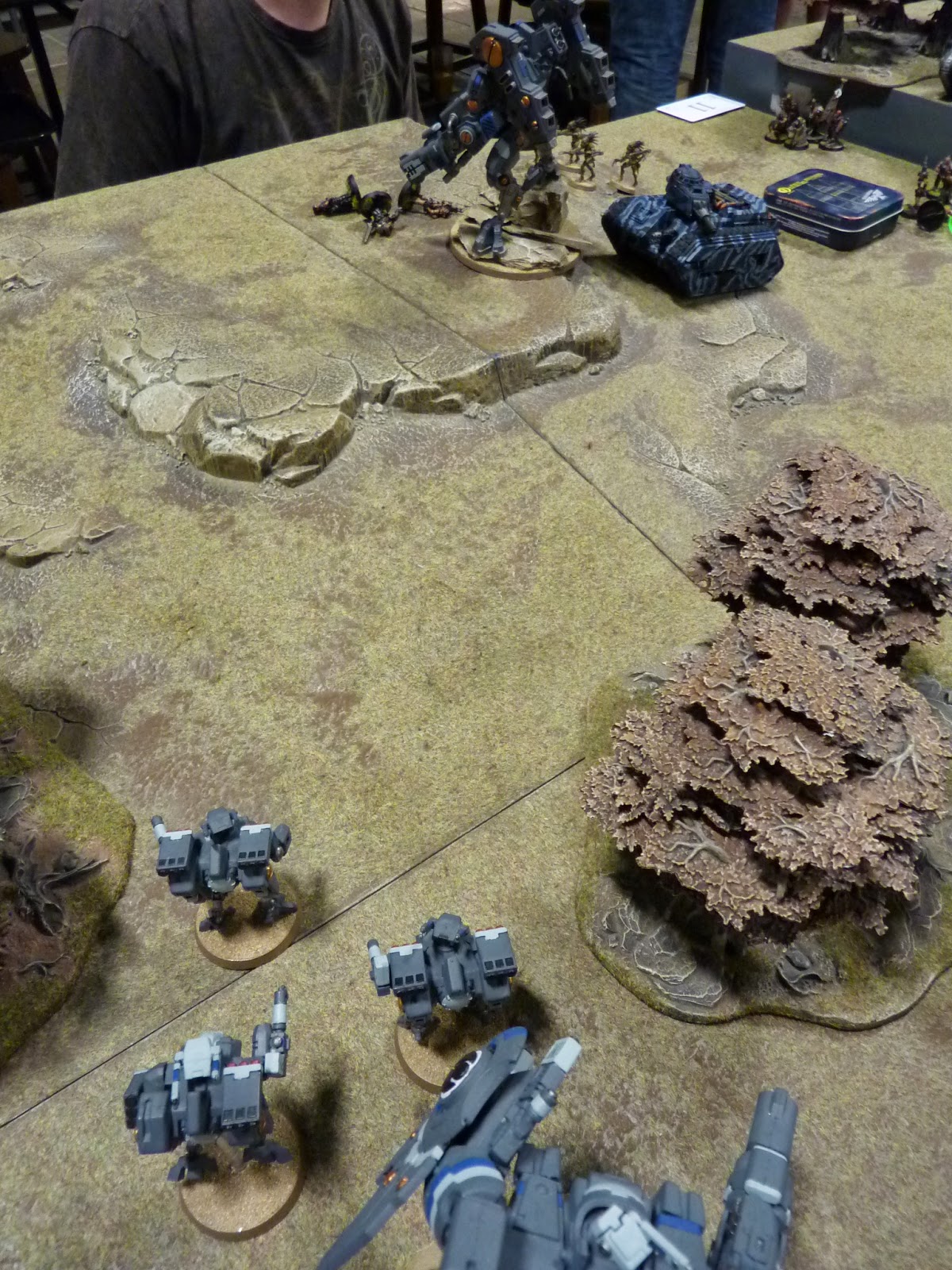 We got one unit of kroot on each side and they started to whittle down the guardsmen on the left and the fire warriors on the right. The crisis teams and riptide started to try and chip away at the commander with his 2+/4++ and shield drones. I made the mistake of not pushing the riptides up the field to get into reliable melta range but our opponents were also forgetting to do their assault phase moves early on. On the other side of the board the wraithknight was downed by a melta from the guardsmen (I think). The wraithguard got out of their transport to try and start flaming stuff but met a demo charge which killed the entire unit, spiritseer included!

Despite this temporary morale boost for our opponents their army was starting to dwindle pretty quickly. At the end of turn 5 they had 3 guardsmen left and since we got a turn 6 we completed the tabling for a 16-5 win. As ever that's the problem with 40K in that sometimes it feels worse to win than it does to lose! 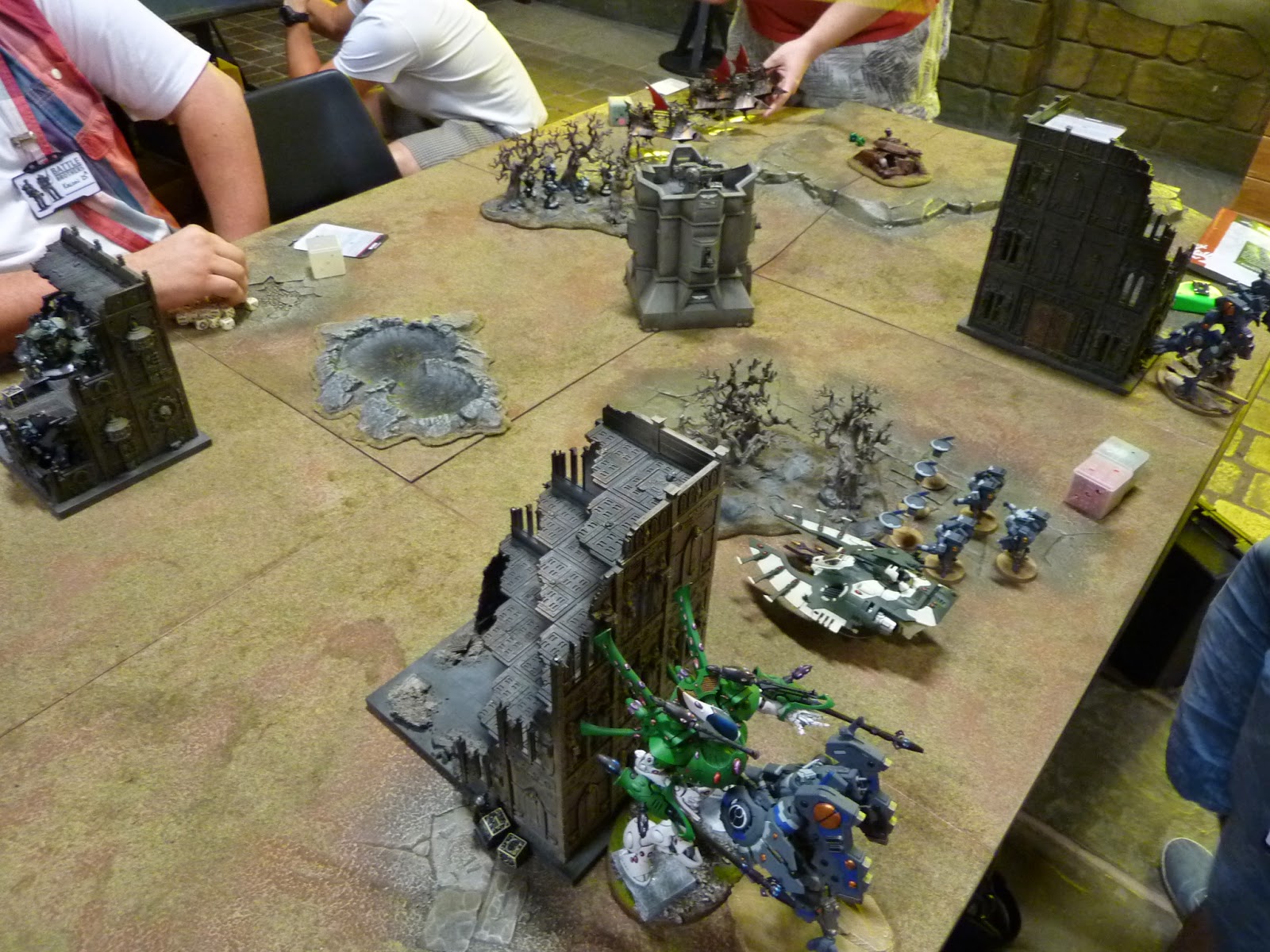 We were drawn against our game one opponents again so swapped with the table next to us which gave us Kalon and Nick who were running Space Marines and Dark Eldar. Their list consisted of an archon with wyches in a raider, two raiders full of kabalites, three centurions with a terminator librarian, two 5 man tactical squads and a stormtalon. We'd be playing Scouring on Dawn of War and with the grav and poisoned weaponry lined up against us we expected this game to be tough. 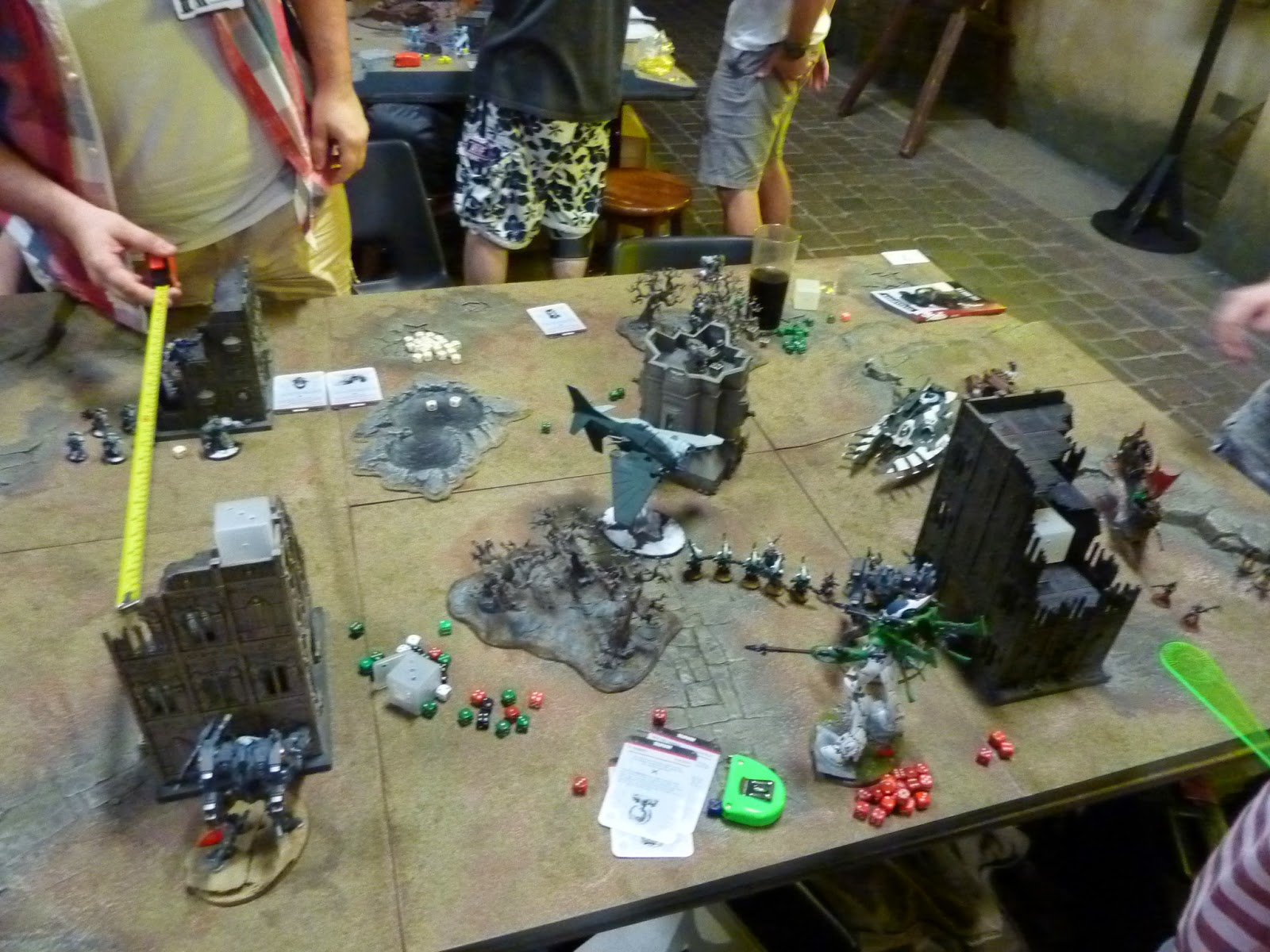 We won the roll off but deployed conservatively as our opponents got the +1 to seize warlord trait and sure enough they seized (but on a 6 funnily enough). Their raiders all advanced with the wyches' one going flat out. The other two took some shots at the drones and managed to kill one. The centurions were out of range so we started our turn. The crisis team fired at a raider but could only take a weapon off one although they did at least force Jinks. The riptide tried to melta it but could only immobilise it which wasn't helpful and disappointed on a 4+ to explode! The other riptide managed to both overheat and take a wound which was special of it and left the centurions unharmed. The wraithknight blew up a raider for First Blood.

To our surprise the archon and wyches elected to charge the crisis team to score Slay the Warlord and succeeded leaving them in the open. The wraithguard retaliated by wiping out the wyches allowing the wave serpent to instant kill the archon despite his shadow field. The centurions moved out to shoot the wraithknight and managed to take it down to one wound which would've been enough for the storm talon to kill it had it not decided to target the wave serpent instead which it could only glance. 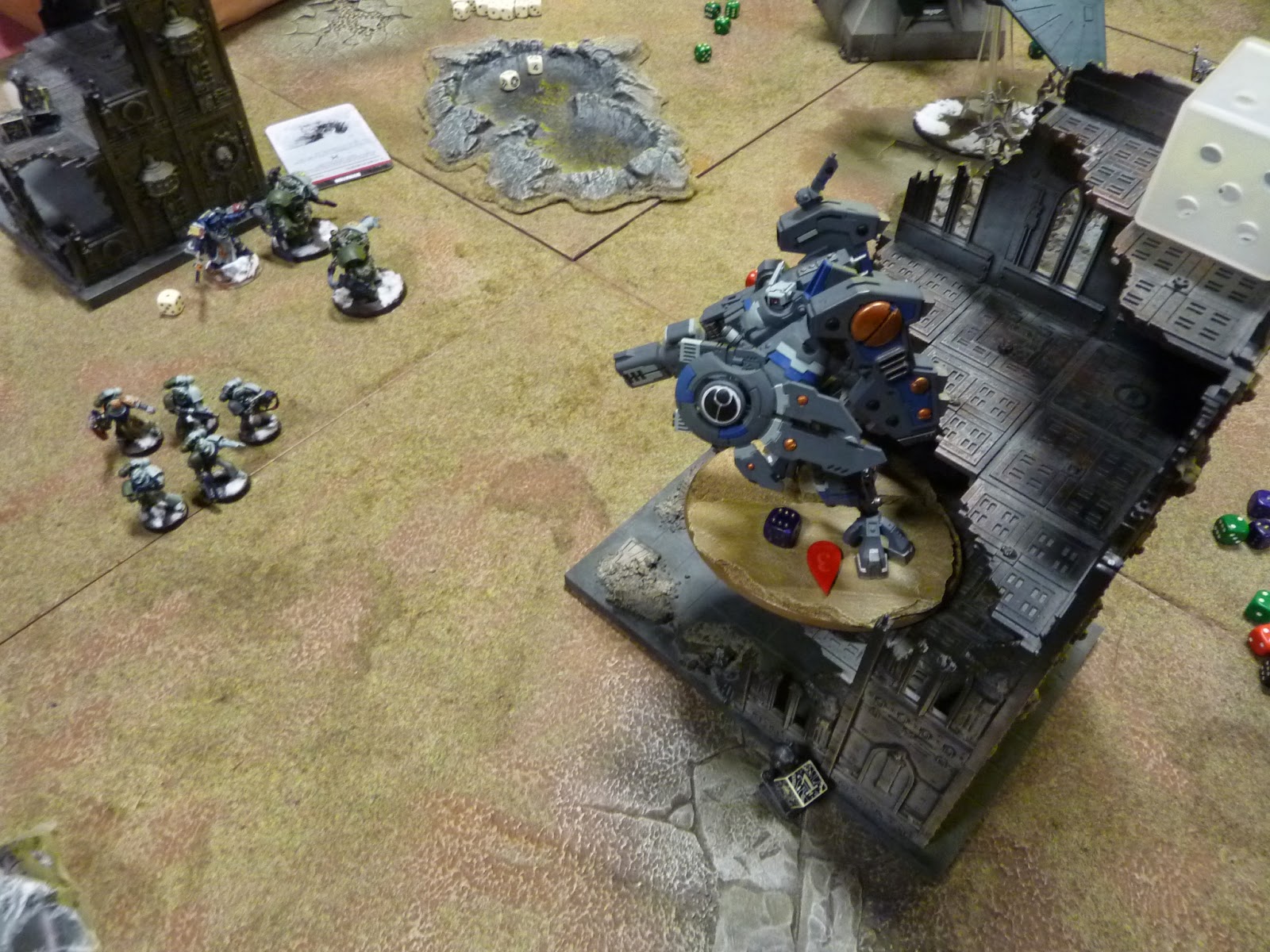 The riptide on the left tried to hammer the centurions in response but with their Forewarning 4+ invulnerable save they passed a whopping 5 out of 6 to keep them in the fight. The wraithknight did manage to kill one though. The remaining centurions split fire to kill the wraithknight and a couple of the wraithguard. The tactical squad began to advance towards one of our objectives to take it from the riptide with Objective Secured. This proved futile as they were cut down before they got there. The other riptide got a chance at half-range melta shots on the stormtalon but could only destroy the lascannon. The wraithguard advanced on their objective and did enough damage to the tactical squad to make them flee the battle. Meanwhile one of the remaining raiders tank shocked some of our kroot and made them run. 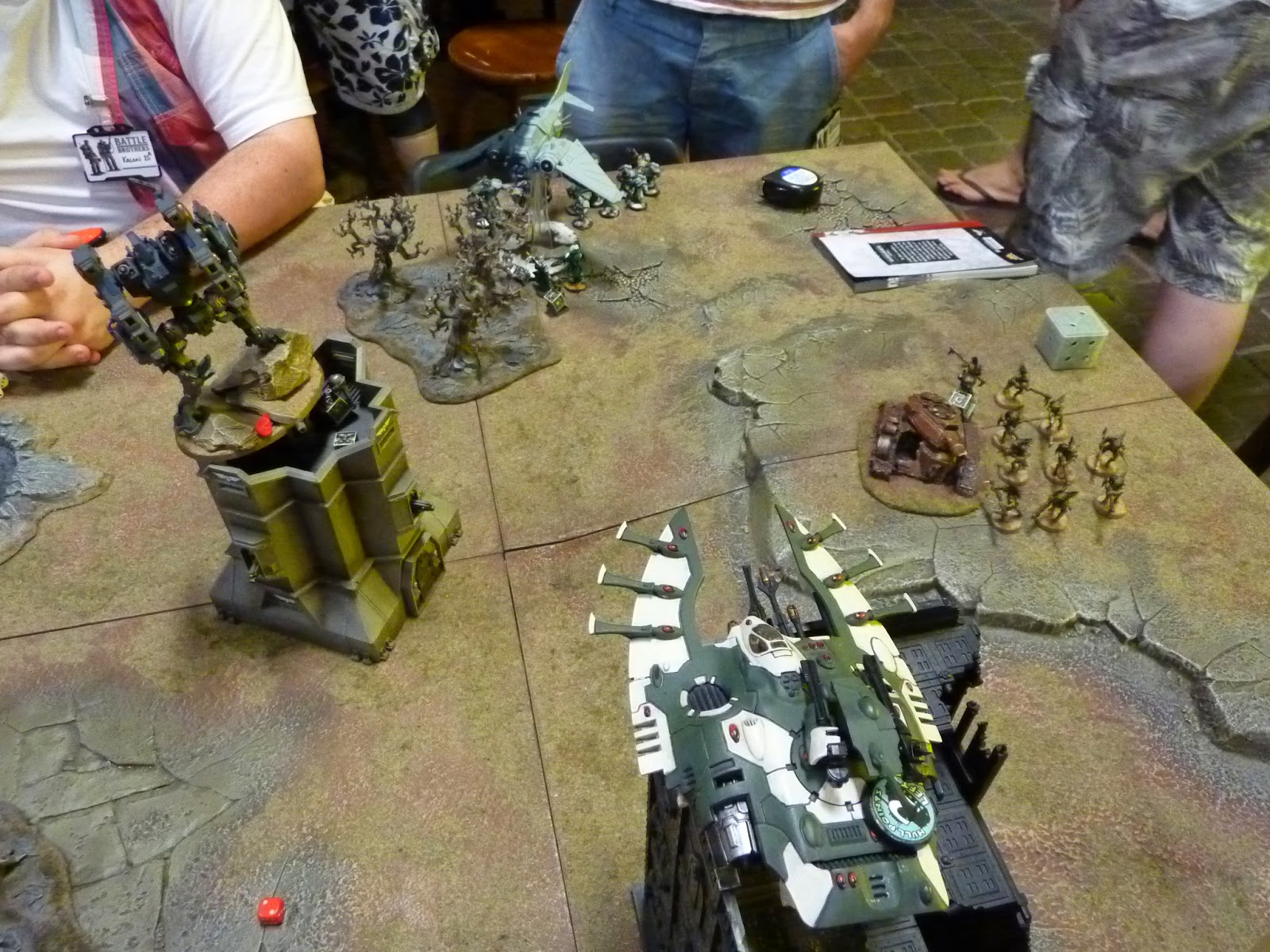 Over the next couple of turns we managed to kill off most of their force (the librarian helped with perils) but they were left with a single centurion to give them an objective and the immobilised raider (which just wouldn't die) to give them Linebreaker. We'd got all of the other objectives though and with all three secondaries again we'd taken a 16-4 win (although it should've been 17-4 since we again forgot the bonus point for the stormtalon).

Conclusion
We'd certainly scored a huge number of VPs over the course of the day but with the inclusion of Favourite Game votes (that we rarely seem to get) it was anyone's guess where we'd place. To our surprise we managed to finish second overall. Of course, being a GW event we only got a certificate for our trouble but better than nothing I suppose. Once again the favourite game votes proved to be our undoing as the guys who won scored 12 bonus VPs for four votes meaning we'd have needed two votes to win (we got none). I've complained about the system before but these days I just accept that's how the event works so a place in the top three is more down to luck than anything else.

It's frustrating not to get a single vote. We genuinely go out of our way to be pleasant to our opponents but of course there are times when we have to query rules etc. Trouble is, no matter how nice you are to your opponent they won't enjoy it if they lose. Anyway, I'm not going to complain again as I've covered my objections before. We had a great weekend once again and to come away with something is great. We ended up with 55 VPs over the course of 5 games which is pretty good I reckon!

On a side note there were something like a dozen Imperial Knights present with some lists having several which I was pretty surprised about but I suppose the model is well loved. Unfortunately we don't know what won the tournament in the end but I'll try to find out for my own interest as much as anything else.