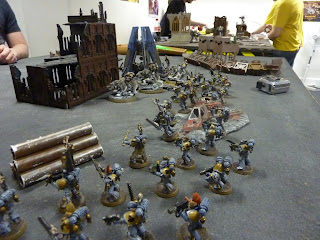 Despite my earlier concerns I'd managed to avoid playing either Necrons or Daemons and instead found myself playing Dave Wigley and his Deathwing. I'd spoken to Dave earlier in the day about how he was finding Deathwing and I was interested to play them to better understand their use.

With the tournament running backwards we'd be playing the first mission now which was Purge The Alien on Dawn of War with the additional rules that for each FOC slot you killed something from you got a bonus point e.g. the first time I killed an HQ I'd get 2 points but the second HQ would be worth 1 as normal. Dave was fielding Belial, an Interrogator chaplain (TDA of course), 2 squads of 10 DW terminators (two plasma, two cyclone, rest TH/SS) and some FW missile things. Therefore he'd only got 5 normal points available and 3 bonus points from HQ, Troops and FA. I on the other hand could give away 13 pts with choices from all but Elites (as the wolf guard become troops when they join squads). This was always going to be difficult as I'd need to comfortably table him to score enough points. We were both in a decent position in terms of the rankings too so there were potential podium spots to play for. I couldn't rely on sheer luck at this stage. 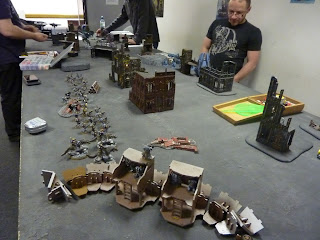 I won the roll off and elected to go first. Now this may or may not have been stupid (I'll get to that later) but I decided to spread out my forces across my deployment zone to minimise the number of places that Dave could deploy safely. I chose not to Outflank the wolf priest as I thought I could use the firepower if I was going to try and down so many TH/SS terminators. As the rules for DW and the 50% in reserve haven't been clarified Dave was playing fair and deploying 50% of his army. This consisted of one of the DW squads and the two missile thingies. He did so in the far corner of the field as far away from me as possible.

Great I thought. I know how this game is going to go. I'll struggle to pick those terminators off and he'll slowly chew through my army with their heavy weapons. With this in mind I decided to put the drop pod down behind some cover nearer my deployment zone. 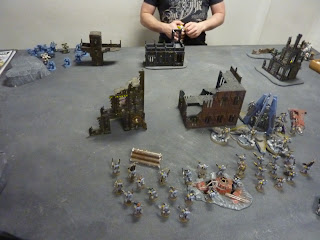 Unfortunately we got Night Fighting so it wasn't until turn 2 that I started to fire at the turrets and managed to kill one straight away with my long fangs. All I'd need to do is down the other which would give me 3 VPs (one for killing it, one for First Blood and one bonus point from the mission). This would put Dave in a position where he had to come to me if he wanted to win and hence allow me as much time as possible to thin out the terminators before they got to my lines.

Unfortunately for me Dave was firing back all the time. I was pretty lucky with the long fangs cover saves though. I was repeatedly casting Prescience to ensure the best chance of downing the missiles but around turn 3 I managed to double-6 it and not only fail to get the power off but strip a wound from my Rune Priest. If I did it again I'd be sure to lose as I'd be gifting Dave 2 VPs. Luckily enough I still managed to take a "wound" off the missile thingies (I really should find out their real name). Belial came down on turn 2 via Deathwing Assault and the plasma cannons didn't really help me out, leaving the long fangs with a single missile launcher and the pack leader who I'd unfortunately put out of sight meaning launchers died rather than him. 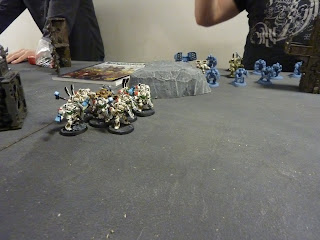 It was now a case of whether the sole long fang could managed to kill off the missile thingy before he died. At this point I moved the rune priest out of the squad and into a grey hunter pack who'd been thinned out by more plasma cannon fire. This meant he'd still be able to cast Prescience (nervously) but he'd also be able to move himself out of range quickly once the long fangs had done their job.

It took until turn 4 for me to finally kill off the missile thingies and score the 3 VPs. I was pretty certain that I'd sealed the game. Sadly for me in Dave's turn 4 he hit the long fangs with the plasma cannons and despite going to ground for a 3+ save they both perished. The score was now 3-2 to me. Dave would only need to kill either the rune priest or some grey hunters to push it to a 3-4. With the other long fangs way out of range I decided my only hope was to play it safe and pull back everything I had as far as possible to keep them safe. The rune priest and wolf priest were buried in the remaining full grey hunter pack and everything else pulled back as far as possible. 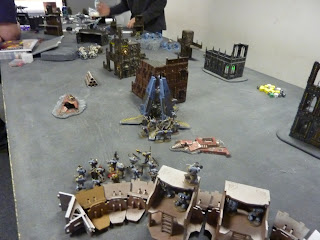 This worked well for turn 5 where I lost a single thunderwolf but the other 2 held their nerve and were able to fall back further in my turn 6. I was pretty confident I'd managed a narrow victory. Dave then opened fire for the final time. The plasma cannons could only kill a single grey hunter (I'd been pretty lucky with Dave's poor scatter rolling) which left just the cyclone launchers to fire. In a move I have to say I wasn't expecting Dave realised he might be able to down the drop pod and win the game. Unfortunately for him he only managed to penetrate with a single missile. This would mean I'd need to fail my 4+ cover save and he'd need to roll 5+ to blow it up. Of course, both of these things went Dave's way and although no more space wolves died in the explosion Dave had done enough with the last possible shot of the game to make it 4-3 to him. Gutted.

As a consolation we decided to honour the tradition of a champion from both armies recreating the famous tussle between the Wolf and the Lion. For the Wolf it would be Arjac Rockfist and for the Lion it would be Belial. Belial managed to inflict 3 wounds on Arjac but he only failed one of his saves. Arjact hit back with his foehammer and inficted 5 wounds. Belial only failed a single save but since he lacked Eternal Warrior (unlike Arjac) it was enough to cut him down. Victory to the sons of Russ! Hail the Allfather...ahem.... moving on.

Conclusion
What I thought would be an incredibly dull game actually turned out to be really tense and tactical. It had a real feeling that every dice roll mattered. Every time Dave fired his plasma cannons I was sure I'd lose a squad. Every time the cyclones fired I thought the long fangs were toast. I felt every single model I lost and was nervous about every morale check. At the end of the game we'd only managed to completely destroy 220pts worth of units between us! Hardly a bloody affair but certainly one I'll remember. Can't imagine there'll be many sagas written or songs sung about the deeds of the Space Wolves as they heroicly cowered in cover! 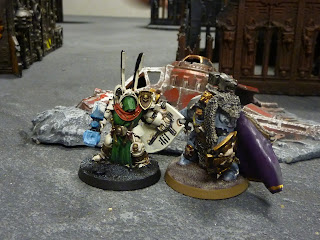 When the game ended I suggested to Dave that he should've really used his low KP advantage and just come at me. There was little or no chance of me managing to kill enough terminators before they scored more VPs than I could reasonably achieve. From his point of view this would've also given him the best chance of climbing the leaderboard toward the podium places.

As soon as I realised that it was a case of kill the missiles and hide I should've been moving my entire army back as far as I could. This would mean that Dave would only get the long fangs. From a game point of view it would still have been a draw but for personal pride I'd know it was a win!

We're going to try and arrange a rematch to see what would've happened if Dave had played it more aggressively but I think I know how that'll go.
Posted by From The Fang at 17:00:00