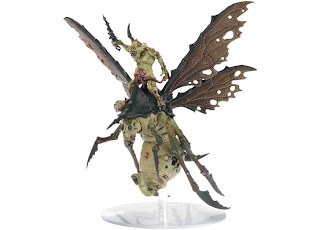 Let me start by saying I'm not a Daemon player and frankly I have no interest in becoming one. That being said Matt (who's one of my regular opponents) has a fairly sizeable Daemon army which he either uses on its own or bolstered by CSM or IG. This means I'm likely to be facing these new models at some point and there'll certainly be at tournaments.

The New Models
I've never been a huge fan of the Daemons models in the first place as I feel that they're limited by the fact that they need to be able to sit comfortably in both a WH40K and WHFB army. Personally I think that they fail on the first count. They're great models for Fantasy but they just always look out of place in 40K to me. I think the only model that doesn't have this problem is the soul grinder and some of the daemon prince variants.

Now don't get me wrong, I understand that these are beings that are supposed to have been around since time began. However, it's a shame they don't look like warped versions of things from the 40K universe. On the one hand I think that's fine because that's what CSM do well but somehow they just feel detached from the game for me.

Take the FW blight drones and compare them to the new plague drone pictured above. Regardless of what you make of the models themselves, to me it's clear that the FW model is warped technology whereas the new model just looks like something out of...well... Fantasy. What I'd love to see is daemons that look like they might've once been men. Something to link them to the 40K universe. Maybe I'm missing the point though.

All that being said, there's some nice sculpts in there and all of them are in that "I'd have no chance of doing it justice" category of models. At the end of the day the good thing about 40K is that there's something for everyone in terms of models. There's not going to be many people who would happily take all of them but that's a good thing really.

The New Rules
Speaking of people taking all armies. It's going to be very interesting to see what the new rules will be. I imagine there's lots of people who accumulated a pile of screamers/flamers that are going to have to decide how much they actually like the new book. We've already started seeing droves of them on eBay but we'll soon see how many people actually are interested in the army rather than bought them because they're the current OP thing. It's kind of the same thing with Necrons where people aren't really interested in the army but know that they're good at the moment. Sadly, we're stuck with the Necrons but thankfully the Daemons are getting brought back down to size.

Having not seen the rules properly, and with only snippets from WD and rumours to go on, it's a bit early to say if they'll still be top-tier or not. Luckily for us they let Phil Kelly write the 40K book whilst Matt Ward wrote the WHFB book. This means hopefully that there'll be the usual internal balance and nothing that's too drastic. Granted he's responsible for the Heldrake which I'm sure as a DA player I'm going to hate pretty soon but in general his books are pretty interesting if a little safe (if that makes sense?).

What seems to be clear is that Daemons won't be Eternal Warrior and that they may have lost Fearless (or at least had it toned down a bit). Some units are still going to be lethal but hopefully it'll pay to take a bit more of a mixture than just the wave after wave of the same thing.

With the allies system armies have pretty much lost their identity now so I'm less excited about books that I don't collect. Personally I just hope that they've dealt with the screamer/flamer issues so that tournaments can be a bit more interesting again (except for the Necrons of course). Still, whatever happens there's going to be the flavour of the month lists that you get sick of playing so at least Daemons got their day in the sun.
Posted by From The Fang at 18:29:00