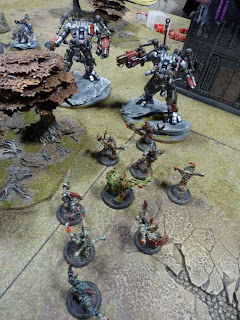 We were convinced our final game would involve a lot of flyers but to our pleasant surprise we were met by Siap and Onno from the Netherlands who's Pus'R'us list was a beautifully themed nurgle army. Siap asked me to say this was our toughest, most challenging game but I'll let you decide! Here's what they were taking (from their list):

The central idea behind this list is that Epidemius is constantly keeping count of the casualties to feed his Tally of Pestilence. This gradually makes the army better and better the more kills they get. 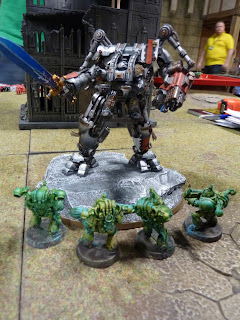 This time we'd be playing Big Guns Never Tire (4 objectives) on Dawn of War which would make our dreadknights scoring! Everything in their army was high toughness though so there was potential both getting bogged down in combat pretty easily. We'd placed our objectives on opposite flanks to try and split up the daemons as they came in.

Siap and Onno got first turn, Epidemius arrived by deep strike surrounded by plaguebearers and the rest of the army moved up to meet us in the middle. This allowed us to avoid using a teleport from one of the dreadknights and get into combat with Typhus straight away. We hoped to be able to beat him in a challenge and quickly take both First Blood and Slay the Warlord. Once again though the dice weren't in our favour. Despite getting three wounds through Onno managed to pass all 3 on 5+ and then managed to make the dreadknight flee the combat with a single wound remaining. Elsewhere the drop pod came down and the grey hunters were able to kill 3 plague marines. The thunderwolves advanced up the centre hoping to react to any Daemons coming down. 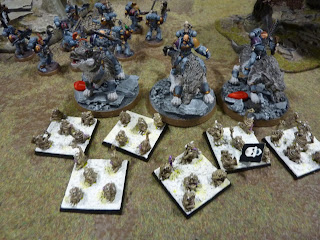 The nurglings dropped in near to the drop pod grey hunters whilst the beasts came down in our deployment zone between our two objectives. The two remaining plague marines tried to take shots at the grey hunters but could only kill one. The other plague marines fired shots at the dreadknight but failed to wound. In return the dreadknight charged into combat and was able to cut them down. The thunderwolves charged into combat with the nurglings hoping to stay there for most of the game and slowly finish them off. With the nurglings needing 6s to wound they'd be fairly safe. Meanwhile the drop pod hunters gunned down one of the plague marines and charged in to kill the other earning First Blood (this actually happened before the dreadknight combat but made sense to describe them this way).

Typhus and his possessed advanced towards the purifiers and engaged them in combat managing to cut down a couple of the grey knights elite. The beasts charged into some acotyles and easily wiped them out. The formerly fleeing dreadknight had another go at Typhus and this time was successful earning us Slay the Warlord. The remaining possessed eventually succumbed to the purifiers. This left the beasts, handful of remaining nurglings and Epidemius with his horde of plaguebearers.

The purifiers turned their attention to the beasts and were able to finish them off after a couple of rounds of combat. We realised we needed to try and gain as many points as possible from this game to help our standings. To this end we moved the drop pod hunters into their deployment zone whilst still controlling an objective. The wounded dreadknight used his shunt move to hold another and we'd got acolytes on our objectives. The thunderwolves managed to kill off the nurglings which allowed us to turn our full attention on Epidemius. The wolf priest finally arrived with his grey hunters and shot into the plaguebearers cutting a few down. The other dreadknight charged into combat with him but Epidemius refused the challenge as "he was too busy counting, come back later". Dark Excommunication allowed us to take away the plague knives and meant the dreadknight could slowly pick away at the remaining plaguebearers.

Eventually Epidemius had no choice but to engage the dreadknight but by this point he'd also got the thunderwolves and wolf priest with grey hunters to contend with! He challenged the Wolf Priest who refused and let the dreadknight kill off the daemon, sealing the game 15-0.

Conclusion
Siap and Onno were brilliant to play and kept us laughing throughout the game with attempts to convert us to Nurgle and shake our faith in the Emperor. From the sounds of it they'd had a pretty miserable visit to the UK thanks to meeting plenty of flyer armies. They were actually pleased to see we didn't have any until they saw what we did have.

With the exception of the original round of Typhus saves were were pretty lucky in contrast to Siap and Onno's bad luck. Their list was an interesting mechanic and it was refreshing not to play Flamers, Screamers or Heldrakes!

All told we'd had a pretty successful and enjoyable weekend. Finishing 20th out of 119 teams is pretty decent, especially with the scoring system. Most importantly we've had an infinite improvement in our favourite game tally with Sean from gaming two voting for us! Apologies to our opponents if I've got details of these battle reports wrong.

It was interesting to see that our list could still perform even with the ever increasing number of flyers around. Having said that the only time we met them in great numbers was the game we lost! There seemed to be a general theme amongst the players we met that they either loved or hated flyers and therefore took them or just ignored them.

We've already booked onto the April Battle Brothers so hopefully we'll see some of you there. Before then we've got Target Sighted at the Outpost in Sheffield which is a 1,500pt singles. Matt, Jamie and I are all heading down so it should be a laugh. Stay tuned for the best painted stuff from the weekend and then some details of a little thing called Blog Wars 5!
Posted by From The Fang at 19:00:00