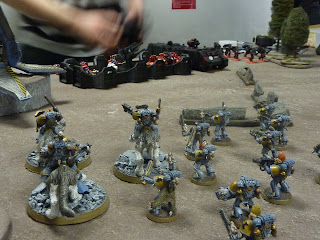 As the placings were read out for game two I found myself on table 5 (I'd actually started on table 1) but unfortunately I was paired up with Chris again. The ref swapped us with the guys on the next table. I was pleased to see that I got James Clulow's Blood Angels instead of the GK that Matt had beaten in game 1. With the tournament missions now running in reverse we'd be playing the dodgy "Escort" mission. The referee ruled that all of the shenanigans were now allowed again but the "Escort" couldn't leave the table until turn 3.

Anyway, James' Blood Angels consisted of Tycho (his "Escort") with 5 sternguard in a razorback, two tactical squads (one in a Pod, the other in a Rhino), 10 assault marines, 5 devastators with a razorback, an Aegis line and another bloody vindicator. Again my list can be found here.

Battle Report
There'd be no night fighting and despite not choosing sides, I won the roll off for first turn. I deployed in a fairly standard way with long fangs in cover and grey hunters/TWC on the left flank. James stuck his Aegis centrally with the devastators inside it. He then had Tycho's razorback with the rhino behind and the assault marines on the far left. The vindicator and empty razorback were on the right. 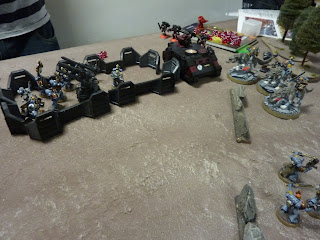 I decided to drop Arjac in to try and take out the vindicator to protect my TWC. He'd be out of the fight for a turn or two because the vindicator was on the flank but it'd be worth it if I could down the tank. Sure enough as his drop pod burst open he came out, launched his hammer at the vindicator (the meltagunner missed of course), and blew it to pieces. So far so good. The long fangs got Prescience and I chose to fire 3  at Tycho's razorback and one cheeky shot at the other empty razorback. The shots on Tycho's were enough to wreck it and I got lucky with the single shot which managed to destroy the twin-linked lascannon. The other long fang pack added to the misery with a couple of assault marine kills. I was already starting to feel a bit guilty.

James dropped in his tactical squad in the back corner on my right flank. The tactical squad piled out guns blazing, cutting down 3 long fangs. The sternguard struggled to harm the TWC as despite wounding on 2s I made most of their saves. The hunter killer on the remaining razorback could only glance the drop pod leaving the BA tank with no weapons left. The tactical rhino advanced at full, flat out, pace.

Arjac and his squad turned their attention to the devastators, moving into rapid fire range and killing all but one marine. The TWC charged into Tycho and his sternguard. Killing a couple of veterans and wounding Tycho. Sadly Tycho made his saves from the power fist though. The long fangs had another great turn with one pack blowing up the rhino. The other squad opened up with frag missiles on the occupants who were clustered in the wreckage. Thanks to Prescience I managed to score a disgusting number of wounds (36 in total) but James finally had some luck and saved all but 7 of the 23 wounds I caused. Elsewhere the Wolf Priest showed up and killed all but 3 of the tactical squad.

The assault marines charged in to try to save Tycho and his veterans. Sadly for James the thunderwolves were able to finish off the veterans regardless and Tycho succumbed to a power fist strike this time around. In the next phase of the combat, all but one of the assault marines perished and the lonely survivor decided it was best to leg it. He stayed on the board by an inch.

At this point there wasn't much left of the Blood Angels. The tactical marines from the rhino exchanged fire with the grey hunters but the Space Wolves ultimately won out. The thunderwolves charged down the remaining assault marine and finished him off. The long fangs got rid of the razorback (which had no weapons) and the wolf priest and his squad rapid fire again to kill the tactical squad before attacking their drop pod in the next turn and wrecking it with the fist from the wolf guard and crozius from the priest. To tidy up completely Arjac and his squad destroyed the quad gun and James was tabled in my turn 4.

I'd managed to secure all 3 secondary VPs, the bonus VP for killing the escort and 11 from the decimation of the army giving a total of 15! James hadn't managed to kill any whole squads and my pile of dead marines only numbered out of the 42 available. You can't get much more one sided than that!

Conclusion
As I said in the previous analysis this mission was never really going to be about the "Escort" and instead would devolve into Purge The Alien. Sure enough that's what happened. My first turn was incredibly lucky. Not only did I blow up the vindicator despite getting side armour and only hitting with Arjac but I also destroyed a razorback and got lucky when the twin-linked lascannon dropped from the other. From then on it was an uphill struggle for James.

At the end of the day comparing like for like it was unlikely to be much different. Assault and tactical marines just can't stand up to grey hunters. Losing the vindicator was a huge blow as it was the only thing I was particularly worried about. James compounded the gulf between the two lists with some awful luck. There were times when his dice rolls were just plain unfair! I often find its the case with 40K that you have awesome games and diabolical ones without many in between.

When you're the one decimating an opponent's army it isn't exactly fun most of the time. Sure it's great if you feel that you've done something tactically superb but frankly I hadn't. The game could've been totally unbearable had it not been for James' good humour, so I'm grateful to him for that. Suffice to say I was pleased with the result and I hadn't done much wrong but it still came down to a lot of luck.

The impending threat of playing Daemons or Necrons was looming ever closer, especially since I was now on table 3!
Posted by From The Fang at 17:00:00