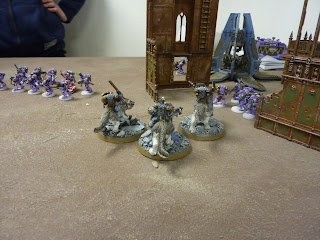 In a change to a mission order that was advertised the organisers decided to play the last mission first. The reason for this was that they'd run a mirror event on the day before and realised that the last mission ended up being low scoring and hence didn't give a dramatic conclusion. Fair play to them for changing it up. Anyway, we'd be playing for 3 central, fixed objectives and Vanguard deployment. If either army ever controlled all of them (after turn 2) they'd win automatically. In turn 4 one objective would vanish. So my first game would be against Chris Thorne and his purple Space Wolves. I was mainly relieved to get at least one game that wasn't Necrons.

Sadly, Chris had included a stormtalon which put me in a difficult position. First game in a new venue against a new opponent. Do you point out that SW can't take them? Do you risk making the game feel miserable throughout? Obviously this is the sort of thing they should've picked up from the pre-submitted lists but nevermind. Anyway, I decided that I wasn't going to win anything so I wouldn't be an arse. I pointed out that other people might make him ditch it but my main problem was that I didn't actually have it in writing that they couldn't take them. I hoped it wouldn't make a difference but read on for that.

Otherwise he had a thunderlord with hammer joined by some fenrisian wolves, a ven dread in a drop pod, two tooled up grey hunter packs led by wolf guard, a vindicator and two packs of long fangs. It's at this point that I realise he only had two wolf guard which again is illegal. Sigh. Anyway, here's a shot of my army, a list for which you can find in yesterday's post, they aren't arranged into squads properly because I was throwing them down for the painting comp before dashing off for lunch! 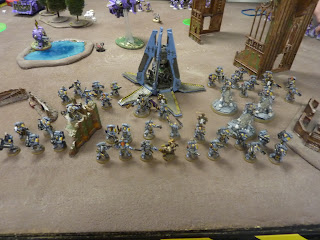 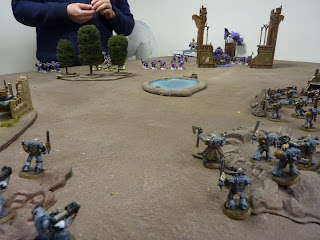 I got to pick deployment zone but sadly Chris got first turn. I knew that it would be costly. He deployed fairly aggressively with the long fangs slightly behind his front line. He got a Warlord trait that let the thunderlord Outflank but either chose not to use it or else forgot. I stuck my long fangs in craters and a hunter pack mid field. The thunderwolves were sat on my right flank so they'd be as close as possible. My mistakes started here. The grey hunters should've been positioned so that he couldn't hit them with anything in his first turn. The vindicator certainly could've been avoided. Anyway, in Chris' first turn he managed to decimate the grey hunter squad by killing 7 of them from a combination of vindicator and long fangs. The dreadnought and other long fangs killed all but one of the long fangs that weren't joined by the rune priest.

As he'd needed to move the vindicator forward to get shots on me it was a simple case of charging it with the thunderwolves who's S10 power fist would almost certainly blow it up. Sure enough they did it with ease giving me First Blood. Elsewhere Arjac's squad arrived but rolled badly and failed to kill one of the long fang packs (they did run though). The remaining hunters that'd been thinned out were out of range of everything else so took pot shots at the fenrisian wolves, killing a couple. The remaining long fangs couldn't seem to kill the dreadnought despite Prescience. 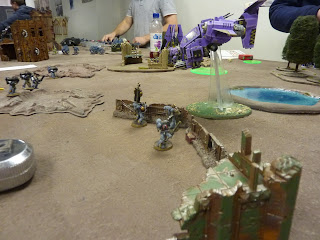 The stormtalon arrived in turn 2 and with help from the dreadnought more long fangs perished. The stormtalon hit with a missile and I decided to risk it on the rune priest's runic armour costing him his life when I rolled a 1! This lost me Prescience and much hope of downing the flyer. The wolf lord turned 180 and headed back towards Arjac and his hunters. His packs of hunters combined to kill two thunderwolves from shooting. One squad then charged the remaining cavalryman but could only wound him once. In return he struck wounds but all were saved.

On my turn 2 the wolf priest squad arrived behind the unengaged grey hunters and thanks to Preferred Enemy they decimated them leaving 2 from the original 11 who then ran! Sure enough the long fangs couldn't kill either the stormtalon or dreadnought again. The remaining thunderwolf rended twice killing two grey hunters but inevitably lost his final wound in return. Arjac and his squad shot at the fenrisian wolves before attempting to charge, which I failed miserably. Turn two had at least been better than turn 1! 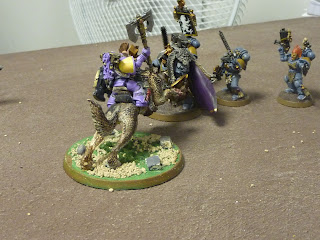 The stormtalon would have to hover to take further part in the game (as it would spend at least 2-3 turns turning around to be able to hit something so Chris elected to fly it off into ongoing reserves. The long fangs were further thinned out by the dreadnought but still clung on. Elsewhere the grey hunters who'd killed the thunderwolf headed for the central objective. The long fangs tried to thin out Arjac's squad but could only land a couple of hits which Arjac saved. The thunderlord charged in and I challenged him. The grey hunters easily dealt with the fen wolves without loss. Arjac struck with his 5 attacks and the wolf lord inevitably bought it thanks to S10. He struck back with his hammer causing 3 wounds. Arjac failed 2 of his 3++ saves on 1s and thanks to the standard managed to re-roll 1 to survive.

In my turn 3 Arjac and his squad shot the fleeing grey hunters and finished them off. The drop pod tried to kill the lone remaining long fang but failed. The long fangs again failed to deal with the dreadnought. The wolf priest and his squad moved up onto the objective and ran to try and be in range of the central grey hunters. My remaining hunters broke cover to head for the central objective and took shots at the enemy hunters killing one.

At the top of turn 4 Chris rolled to see which objective disappeared and sadly for me it was the one controlled by the wolf priest's squad meaning they'd need to break cover and head for the centre. The storm talon re-appeared and killed a few of the wolf priest's hunters. The drop pod killed the lonely long fang with its storm bolter (gutted) and the dreadnought finally finished off the other long fangs. Elsewhere Chris' remaining long fangs gunned down the remains of Arjac's squad including Mr. Rockfist. The drop pod was made to pay for failing to kill the lascannon long fang as he blew it up.

In my turn 4 the wolf priest and co. couldn't get into decent range of the central hunters so the other, dwindled squad of mine charged in. It was a straight hunter vs hunter fight but Chris managed to pass 4 3+ saves to keep his fist alive who then made the most of it by finishing my squad.

I'd now only got the wolf priest and his thinned out squad to try to hold out for a win. With the clock ticking down I knew I had a decent chance. Chris only had a very small scoring unit left and with me taking First Blood & Slay the Warlord he'd need to table me to win.

Stupidly, (I'll get to that) I decided to push the wolf priest forward to clear the remaining hunters and try to grab the objective. Over the next couple of turns Chris' dread, long fangs and stormtalon thinned out the squad enough that in turn 7 (it was a compulsory 7 turns) the wolf priest was on his own with far too many saves to make. Depsite being tabled I'd actually got 2 VPs to Chris' 1 from Slay the Warlord, because of the tabling though it had to go down as a loss for me.

Conclusion
I should've played for one of the objectives on my left, deploying a squad of grey hunters on that side. This would've kept them safer and force him to either risk the dreadnought near them (which they had a good shot of killing) or else the rest of his army would've needed to advance to get range whilst I shot them. The thunderwolves did their job but by waiting a turn or two and hanging around the edge of the vindicators range I could've shot it with long fangs and protected them so they wouldn't have been left vulnerable after killing it. Still it did give me First Blood and nearly give me the game.

Had I thought about it better I should've shot the dreadnought rather than the stormtalon on my second turn. The talon was going to have to hover and ultimately the dreadnought was more of a problem. I doubt I'd have killed it though with the rolling I was having combined with its Venerable rule.

Finally, I really should've hugged cover with the wolf priest's squad and killed the hunters at range. With Preferred Enemy that would've been a fairly simple task. I could've kept them out of sight of the long fangs, out of range of the dreadnought and got them cover from the stormtalon. The objective was irrelevant at this point but I think I was boyed by the turn around I'd managed despite feeling like it was one-sided for the first half of the game. 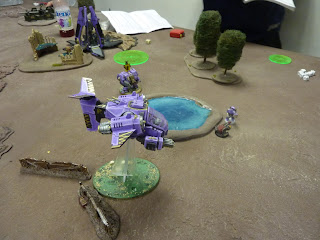 I'd love to say I don't think the stormtalon thing mattered that much but it was pretty decisive. I was always going to struggle to kill it even with Prescience and it managed to kill most of the long fangs, finish off the Wolf Priest on the final turn and distract my attention from the, easier to kill, dreadnought. As much as I didn't want to be a dick I screwed myself by not pointing out the illegalities of my opponent's list. I really wish the venue had properly checked them so that I wasn't in that situation but I know from Blog Wars experience that it isn't a fun or easy task.

Anyway, having lost I should manage to avoid playing Necrons or Daemons in my second game!
Posted by From The Fang at 17:00:00