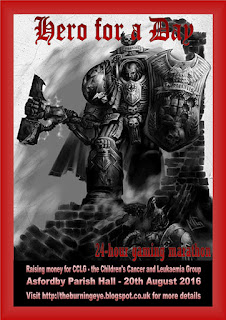 Putting Double Trouble feedback to one side for a moment, I wanted to talk about the next tournament I'll be attending (barring the Outpost coming up with anything in between). Last week I picked up my ticket for Hero For A Day for the bargain price of £10. That's £10 for 8 games of 40K over a 24-hour charity gaming marathon!

It's hosted by Nick Thrower of The Burning Eye (who I know through Blog Wars). The idea is to play some relaxed games of 40K over a 24 hour period (midnight Friday to midnight Saturday) and raise as much money as possible for the Children's Cancer and Leukaemia Group. It's a fantastic cause and one that I know is close to Nick's heart. I'm looking forward to the event for two reasons, firstly the thought of gaming for a good cause but secondly because it'll be nice not to be a TO at a friendly event for a change!!

I've already covered some of this but here's Nick's blurb about the event:

Hero for a Day is a 24-hour tabletop wargaming marathon set in the Warhammer 40k universe. It will see 20 players coming together, battling in teams across 8 missions for control of the planet Hormung Prime. The missions will incorporate single-player matches, doubles games, handicap matches and kill team skirmishes representing the varied conflicts that rage across the planet's surface. The outcome of each mission will affect the objectives of the next game, with the final match of the day sealing the fate of the planet.

The main aim of the day is to raise money for CCLG - The Childrens Cancer and Leukaemia Group. Tickets have been kept to a minimum price to ensure that as much sponsorship as possible can be raised for the charity by the players. There will be a raffle on the day with tickets available prior to that via PayPal for those who are unable to attend in person (postage payable dependent on the prize for those who win).

Speaking of the raffle, looking at the prizes on offer so far it'll be one to rival those at Double Trouble and Blog Wars. I'm throwing in another set of Deathwatch: Overkill but there's also a Forge World Knight Cerastus in the pot amongst plenty of other stuff!

I'll be posting about my army lists (I actually need 9 of them because of the handicap games). For the time being I'm going to be taking Tau as I'm on the attacking team but I've said I'm prepared to switch sides to even things up if need be. I'm in the process of painting up my Stormsurge for the event too so I'll keep you posted on my progress.

I'm already looking forward to it. Hopefully I'll see some of you there and actually get to talk to you for a change!
Posted by From The Fang at 19:53:00