First up, John Purves sent some pictures in of his Ultramarines force. He'd originally planned on a totally different list but has painted like mad to change it after play testing. I'll let him explain:

Some army progress shots for you! 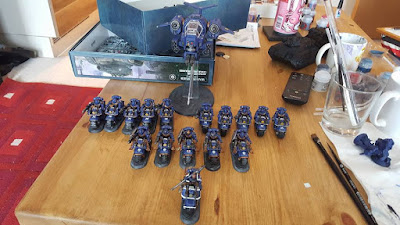 That was my original army list, which I painted up after signing up for double trouble. I then had a trial game against some Eldar, (minus the bike mounted command squad) and the two squads of bikers were tabled on turn one by 2 wave serpents and a 5 man squad of warp spiders, which was disappointing. That list was:

The only thing painted before signing up was the stormtalon. 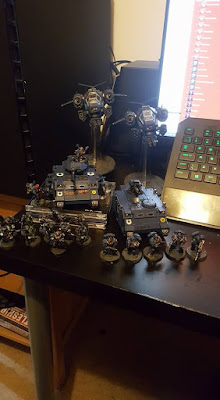 Since changing my mind about 4 weeks ago (I've been at sea for three of those!) I've had to paint Chronus, a Predator, Telion and 5 scout snipers.

Only a bit of light touch-up work to do on the scouts and the army is ready!

I'd love to tell you that John's list was one of few marine lists but....

Anyway, moving onto another marine list. Dave Weston has recently finished work on his ravenwing and has put up some shots of his entire DT force. He's also added some shots of his full Dark Angels army in another post. Here's a couple of choice shots but you should definitely check out his blog anyway. 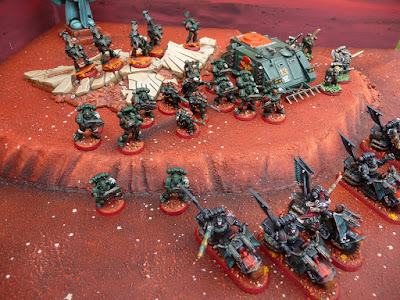 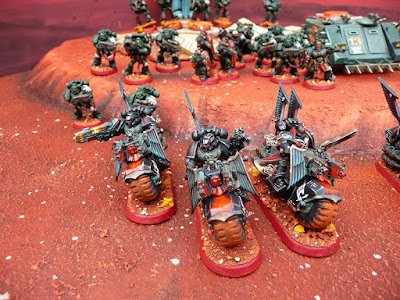 Elsewhere Rob Hill has recently posted about his Mechanicum (FW) army with some stunning shots of the force. Judging by the pictures we've seen so far the painting competition will be a of a very high standard. Again here's a couple of shots from Rob's blog but check it out properly for yourselves. 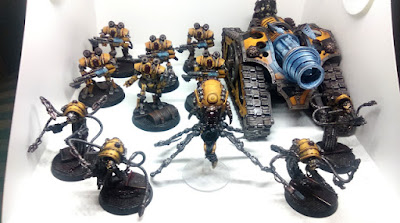 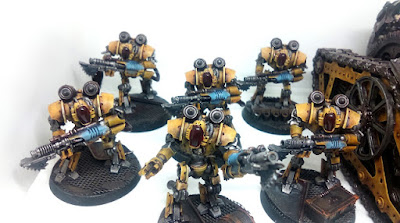 Finally, Luke Fogg is running a little X-wing event on Friday (there'll be people playing 40K warmup games too I'm sure). He's posted some details on his blog where you can also see some shots of his Howling Griffons which are making an appearance at DT and have been featured in this series already. You don't need to bring any X-wing models but comment on his blog if you're making an appearance so he has a rough idea of numbers. 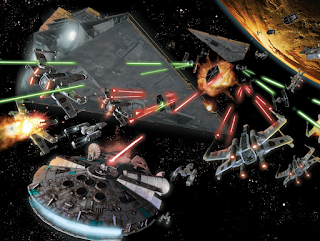 That's it for tonight. Over the weekend I'm hoping to post some pictures of the progress (!) I've made on my own army for Double Trouble. Incidentally, as it stands we've got 32 players after a couple of dropouts and a couple of non-responders. That means I've been able to do the table draw for all three rounds with a random number generator (no, I'm not telling you) but also that I can get some pie charts made and posted up. Keep your eyes peeled for them!