Right folks, I'm determined to keep my battle reports brief for a change. I love the WD style reports that Michael over at St Andrews Wargaming puts out but I don't have the time for diagrams so mine always end up too wordy whilst I try to describe what happened where and when. Here's my list and then straight into the battle reports:

In all three games there were concurrent missions of Blood Points and Tactical Objectives (using the custom DT deck). 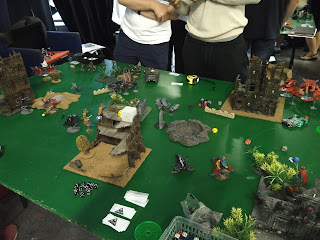 I was thrilled to be paired up with Nathaniel Gibbs for some double Dark Eldar action. Mind you, I felt pretty inferior compared to the stunningly converted and painted half of our army belonging to Nathaniel. One day I'll have a beautiful army, one day. Nathaniel had two venoms of his own (although his kabalites had a blaster), a beast pack, sucubbus with grotesques in a raider, some mandrakes and a talos. A nice combination of units between us. Dan Evans' Space Wolves consisted of a squadron of jetbikes, two rhinos with tactical squads and a landspeeder. Danny Evison's Eldar had an Autarch on jetbike, 2x 3 SL windriders, a crimson hunter, two hornets and a warp hunter. 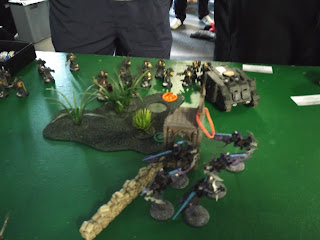 We got the first turn and knew that we needed to prioritise the Eldar both because of their speed but also because the tanks would tear our vehicles a new one pretty easily. I tried to position my scourges so that they covered most of the board but sadly there was a piece of terrain that Danny managed to hide pretty much his entire army in or behind. That meant we had to pick on Dan's marines which we did with surprising effect. The first volley from the DE took out all of the jetbikes and wounded the Autarch, destroyed one rhino and immobilised the other! Much better than we'd hoped but a shame the Autarch limped on.

The response wasn't as brutal as we'd expected either. Danny hugged the terrain and never really unleashed the firepower on our army. That meant we kept 3 of the 5 venoms for a good while. We drew some decent tactical objective cards but also both of the cards referring to our opponents' objective which was swarmed with Eldar! The talos was forced to stay on the objective in our corner to get the bonus points for controlling for two turns so ended up dying in that spot to the Eldar fire. I really think they focused on it too early when it wasn't that much of a threat with a single haywire shot.

Meanwhile we'd drawn a Take the Point card for the objective next to the remaining rhino. We decided to throw everything we had at it to score the points. The rhino was contesting the objective so we'd need to shift it to allow our Reavers to control it. The remaining scourges failed to do any damage so we were left with a last ditch single dark lance from the grotesques' raider. Miraculously it blew it up! The venoms then went to work killing just enough of the occupants to clear the objective.

Danny insisted on targeting the scourges to protect his vehicles rather than target the reavers and try to save the tactical squad. The combined DE army then charged into the marines with a single scourge taking all of the overwatch fire and surviving with a double six for 6+ FNP! That left just Danny's half of the army pretty much unscathed (minus the Autarch who I forgot to say had killed himself on dangerous terrain in turn one!). Dan just had his speeder left. 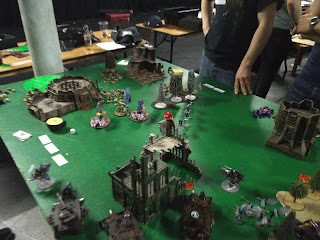 My partner for this game was Matt Calow with his beautiful 3D printed creations including custom dozer blades for his vindicators and a conversion beamer for his techmarine on a bike. Matt was running an Armoured Task Force with 3 vinidicators, 2 separate predators and a techmarine. We were facing James Maynard's Khorne consisting of blood hounds, cultists, lord on a juggernaut and a heldrake. His partner Matthew Grimes was fielding a summoning force of Tzeentch Daemons with a lord of change, herald, pink horrors and a couple of burning chariots. I knew from checking the lists that his force was geared up to summon a chariot every turn so the lord of change would be a priority target. 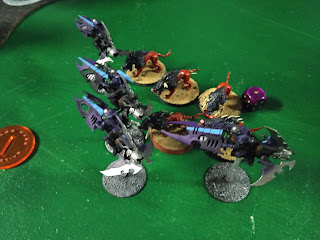 Sadly, we didn't get the first turn so their army advanced and summoned a third chariot. The chariots torrented into my venoms killing the Archon who failed his first shadowfield save and destroying a couple of the venoms. In response the remaining DE forces managed to take the lord of change down to a single wound despite it swooping. In fact, he'd have been destroyed were it not for the Warp Storm granting him a +1 to his invulnerable save! Elsewhere the vindicators unleashed their ginormous blast but it scattered meaning that only one of the two chariots it was targeting was destroyed.

The chariot was quickly replaced in their next turn. We were fortunate that the Heldrake didn't appear but it was little consolation as the chariots made short work of my army. The rule allowing template weapons to cause D6 wounds to occupants of open-topped vehicles is retarded. Sure it makes sense from a realism perspective but the armies it screws over (Orks and Dark Eldar) were hardly overpowered before it was introduced. I digress. 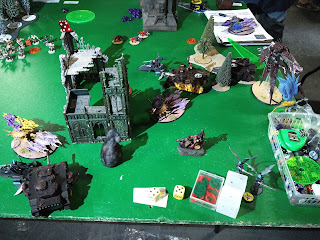 The lord of change somehow clung on with a single wound left meaning not only would he keep on replacing the chariots but also that we didn't score the kill a psyker card we'd held onto in vain. Ultimately we couldn't deal with the Tzeentch half of the army. I felt a bit sorry for James because his Khorne barely got a look in. They were quietly scoring VPs by claiming objectives but basically Matthew's chariots and lord of change did most of the killing. We ended up having to sacrifice the techmarine (who was our final remaining model) in combat to end the game and prevent any more VPs being scored. We should've conceded I suppose but that felt a poor way to end the game. Ironically if we had, Matthew wouldn't have won the Master Tactician award as he scored 2-3 more VPs on that final turn. 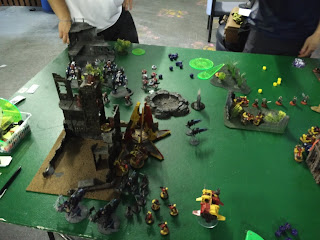 I felt like I'd been pretty lucky again with my partner in this game. Dave Weston's DA army had a decent core of fast units and some ranged firepower. He was fielding a techmarine, scout squad, tac squad in rhino, tac squad on foot, assault marines, two ravenwing units and a devastator squad. On the opposite side of the table (well sort of, thanks to the deployment) were Matthew Spencer's Tau consisting of the Optimised Stealth Cadre with three Ghostkeels and Luke Fogg's Space Marines with a librarian on bike, scouts in a LS storm, 2x3 bikers, 5 tactical marines and grav centurions in a pod.

The final game required the combined armies to split in two and deploy in opposite corners to each other. In hindsight I'm not sure this was the best deployment but it certainly made for a different game. I felt a little ganged up on in the corner as the Tau were shooting me, centurions podded in next to me and landspeeder headed over too! I was busy taking casualties to the centurions and looked up to see that somehow Dave had lost all of his Ravenwing already. I'm not sure what happened there! 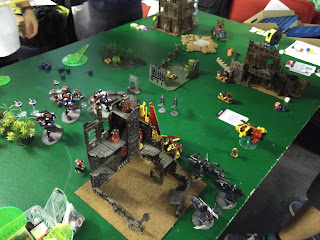 Anyway, we really struggled to achieve anything between us. I was forced to sacrifice the Reavers cheaply for an objective again but otherwise barely left my corner as I had to deal with the centurions, scouts and stealth suits that came my way. The standout highlight was the Archon taking on some scouts, stealth suits and the centurions on solo in combat having already lost his Shadowfield (first bloody roll again!). Thanks to his armour of misery he just needed to win the combat to have a decent chance of making stuff run from the table. He killed a scout and stealth suit and cause the centurions to break. Miraculously they got away (they rolled a 6 and I rolled a 1 for sweeping) but sadly didn't quite run off the table.

I quickly lost the rest of my force and Dave wasn't faring much better as the Tau closed in. The game ended with a 7-16 and 371-1300 loss. We'd been frustrated not to score more VPs but a combination of badly timed cards and objective secured scouts messed with our plans! 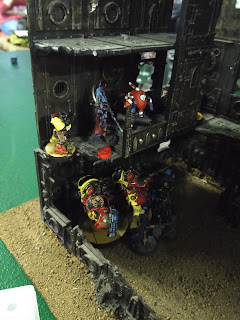 I may not have had a particularly successful day but I certainly enjoyed it regardless. Playing with 9 different people was great fun. I've always loved doubles events (as I'm sure you know) and getting to play with and against some interesting combinations of armies and people was brilliant.

The interaction between newly paired up teams was interesting. Some worked better than others. I was pretty lucky with my partners though as we seemed to be on the same page generally speaking. My best game was definitely the surprisingly close double DE game. I really thought we were going to have nothing left by the end of turn two. We were pretty lucky with our rolls but I really think Danny was too cautious with his Eldar. My Scourges may be capable of stripping hull points pretty easily but with Jink and plenty of cover he really wasn't in much danger. That meant poor Dan was hung out to dry a little.

As ever when playing Dark Eldar, not having turn one in two out of three games really hurt. DE rely on that big alpha strike to take out some of the big hitters in the opposing army. If we'd gone first I think the lord of change would've been gone, especially since he wouldn't have had the 4++ save from the warp storm table. We wouldn't have struggled to take the chariots down after that and could've picked off the other daemons as they advanced. Having first turn in the final game would've helped but I'm not sure it'd have made much difference. We might've been lucky and killed 1-2 of the ghostkeels but the centurions would've still been a big problem.

Anyway, I'm already looking forward to the next one and slightly regretting my decision to only run one a year. Who knows, I might cave....

Come back in a couple of days to give me your feedback on the event so that, whenever the next one it is, it'll be better.
Posted by From The Fang at 17:00:00