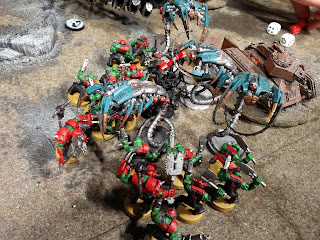 For better or worse Matt and I rarely get chance to play these days. That's made getting some playtesting in for Double Trouble extremely difficult. We decided to take advantage of the May day bank holiday to get some gaming in and dedicated the full day to Double Trouble testing. We decided the best way to do this was to each bring four different 750pt lists and randomly pair them together. For me it was Dark Eldar, Dark Angels, Orks and Space Wolves. For Matt it was Chaos Space Marines, Eldar, Necrons and Grey Knights. The plan was to play through all three deployments (the mission is the same in each round) and see how things played out with the varying combinations.


Nick Thrower was kind enough to review the Double Trouble objective cards for me a couple of months back so I thought I'd take this opportunity to test out one of his suggestions. I'd originally got all of the "secure objective" cards with the same mission which was 1 VP for holding a numbered objective with a bonus VP if you also held any other objective with a unit from the other half of the army. Nick's idea (though borrowed partly from GW) was that perhaps it'd be good to have 6 like that and the other 6 as 1 VP for holding objective X and 3 VPs if you still hold it in the next friendly turn. I printed up a set of cards with this on so we could see how it worked out.

My lists were the ones I posted in the sample armies post back in March but obviously without the Tau. I'm actually tempted to take Tau but I don't think I'd particularly enjoy using them. I was secretly hoping going into this that I'd prefer one of the other armies to my Dark Eldar because the other three would take a lot less time for me to get finished! 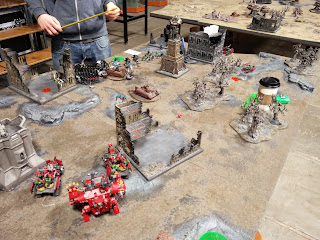 Well we're straight into a desperate alliance on my side and some allies of convenience for Matt. Remember that at Double Trouble both of these armies count as Battle Brothers (as does every other combination). I think people will definitely have enough on without worrying about One Eye Open etc. Anyway, I quickly realised that my Space Wolves list wasn't well thought out. There's nothing on the table at the start of the game and only one drop pod coming in turn one. That puts a lot of pressure on the reserves rolls and even more so since Matt's warlord trait was -1 to my reserve rolls. The Orks would need to do most of the work! 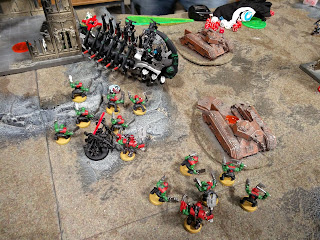 The first SW pod came down near the immortals to try and thin them out before they did their teleport shenanigans. The wolves managed to down a good handful of them but Obyron survived. The Orks took some pot shots at the ghost ark and would've left it on a single HP were it not for Matt jinking it. As it was they managed to score a penetrating hit which is a big deal in making it easier to down later. I decided to gamble and try to claim a couple of objectives for two consecutive turns so didn't score any points just yet.

I'd unwittingly left the grey hunters in range of a charge from the flying daemon prince who'd been hidden away behind the ghost ark. I paid dearly for it with only two hunters and a rune priest surviving the initial charge from the DP and nearby cultists. The grey hunters did manage to take the cultists down with them though leaving themselves locked in combat but the DP free to move off. Elsewhere the Necrons managed to wreck both Ork trukks which would make charges difficult. On the other side of the board Obyron teleported his immortals onto an objective held by a deffkopta but somehow it held on with a single wound. 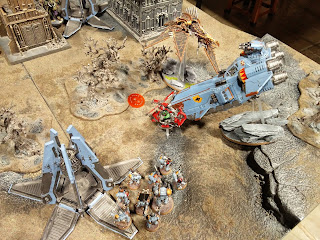 Nevertheless the two mobs of Ork boys managed to get into combat with the wraiths and to both our surprise they killed them all off for minimal losses. This did leave the boyz right in the open in front of the ghost ark though. The Morkanaut managed to cause some more damage to the ark but it still survived. Meanwhile both the Stormwolf and second drop pod arrived and cleared the immortals from the objective to claim the bonus for holding it for two friendly turns.

One of the Heldrakes arrived and incinerated most of the newly arrived grey hunters. It also positioned itself close enough so that the Stormwolf would need to hover to take it on. The remaining cultists, tomb blades and ghost ark cut down both mobs of boyz and the weirdboy with them. The Stormwolf somehow failed to take the last hull point from the ghost ark despite hitting with everything (Matt is ridiculous with Jink).

At this point we were running short on time (we tried to keep to 2hr games to get the full three in) so we called the game there. I had a 10-8 victory on VPs but Matt had a 836-712 blood point victory. 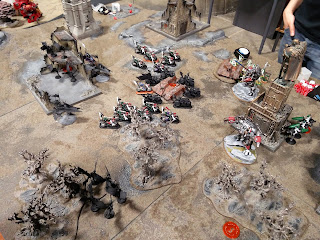 This was a combo I really hoped I'd get. Having two really fast forces paired together would make Maelstrom really easy. Obviously durability would be a problem but hopefully the combined firepower would be enough to take plenty down first.

Once again I got the first turn and, having scouted all my bikes forward, I felt reasonably confident that the combined firepower from both forces would be enough to take down one dreadknight and with a spot of luck, both. Unfortunately for me, Matt rolls 5+ better than he rolls 3+ sometimes so whilst one knight was destroyed, the other survived on two wounds and I'd made him mad! The combination of fire from the dreadknight, shots from the guardians and eventual charge from the dreadknight completely wiped out my black knights. The rest of the army put a serious dent in the other DA units too. 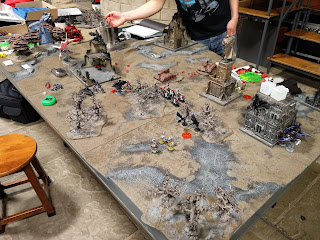 Still, the other dreadknight eventually fell and the librarian was unlucky to fail a charge which cost him his life via the same venom he'd not gotten into combat with! The venoms survived a lot longer than they probably deserved to mind you (amazing how often that happens) but the DA portion of the army had committed too early and dwindled pretty quickly. It was around this time that I realised I'd completely forgotten about my Reavers so quickly brought them in from reserve the next turn. Eventually the venoms started to fall and the tide quickly turned.

At this point the outcome of both missions was pretty clear. Matt would easily take the blood points but I'd win on maelstrom. We decided to call it in the interests of more testing. 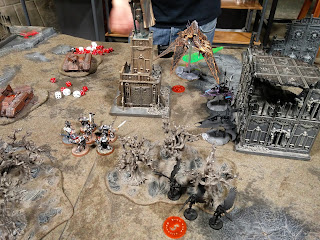 For the final game we decided to play with our favourite combination from the armies available to us. I'd enjoyed using the Dark Angels & Dark Eldar combo (Double Darkness?) and Matt would go for his GK and CSM forces.

Sadly, since I'm writing this nearly a fortnight later, I'm struggling to remember too many details from this game but basically I got first turn (again!) and took down the DP pretty quickly. The dreadknights survived a lot longer in this game though and the combination of them and a pair of Heldrakes was way too much for my army to handle. I held my own long enough to take yet another maelstrom victory though and the game ended with a completely unneccesary charge from the Archon into the GK terminators just for some sport. It didn't end well for him but was a good way to end the day.

Once again Matt won on Blood Points but I took it on Maelstrom when we had to call time.

Conclusion
We certainly didn't dawdle when playing these games but with about 2 hours per game we struggled to get through them. Granted with a doubles team it would've been more efficient but I'm pleased I didn't go above 1,500. It was pretty clear who'd won in both games and whilst I could probably have killed more of Matt's army in the first game, the other two were well beyond my reach. Bear in mind Matt really wasn't playing for all out destruction, he was going for the missions too but I think I was pretty fortunate with a few and probably played a bit more on the maelstrom side than the blood points. 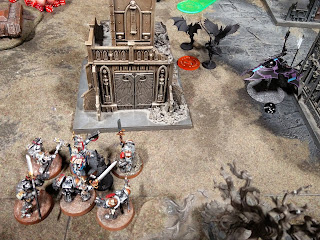 It's a fun system having two missions running simultaneously. It'll will be interesting to see how the partnerships work on this front. If one player is playing for maximum destruction and the other wants to hug objectives it will certainly prove entertaining. I think the random pairings of the armies will throw out some unique combinations. With the Battle Brothers for all rule we might see some unthinkable synergy happening between some very unfluffy mixtures. Speaking of which, there have been questions about how certain rules will be shared between the team so I'm going to try and pick a few examples up to help people figure out how it'll work. Look out for that post.

One thing we both agreed on was that writing a list with too much in reserve is a real risk. Obviously this is the same in any army but if both forces end up with a lot in reserve, there's going to be really problems scoring maelstrom points early on. When my Orks were paired with the SW they were on their own early on. The SW list had far too many points in reserve and I was just lucky to get everything T2. It's obviously difficult though as you don't want an army that's too static. As with any maelstrom game, fast units are going to be important. Having threats coming in behind the lines could really help out your partner.

I was really hoping I'd like one of my other lists more than the DE list since they're all more painted than the DE. Trouble is, the DE force is easily the most well rounded of the bunch. There are anti-tank threats from the scourges, plenty of poisoned fire for MCs which can also be turned on lighter infantry. It's incredibly fast for claiming objectives and ObSec doesn't hurt. I'm really not sure how the hell I'm going to even get to three colours before the event but I'm hoping I can. I've all but abandoned the dream of a fully painted army appearing. The other forces I came up with just didn't excite me like the DE did. Since their latest codex I've really struggled to love my DE. They're just not cut out for the current climate in the game. I really think they work well at this level though and you can pack so much into 750pts it's a little obscene. They're still incredibly flimsy mind you but with the right pairings that might not be too much of an issue.

The biggest takeaway from this testing was that this event is definitely going to be a lot of fun. Of course that relies on everyone embracing the system and getting along with each other but I know most of you and I'm confident there won't be many issues.

As is typical in these periods when I should be frantically hobbying, I can actually think of tons I want to blog about. There's going to be a few more galleries coming your way from player contributions but first I need to talk about some amendments based on this play testing. I'll do that in a separate post. Nothing too major just ironing out a few creases. I'll then get onto a post about how different rules will interact.
Posted by From The Fang at 20:03:00