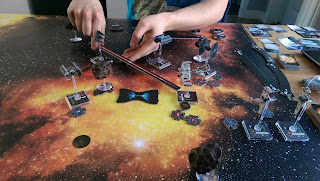 With Epic game out of the way we switched back to normal 100pt games of X-wing to finish off the day. I started off playing Matt whilst Scott played Sam. We'd stick to 75 minute games to simulate the tournament experience. Not that I can see Scott and Sam ever playing in a tournament. Frankly Sam will never buy any models as long as he can keep using ours. If we want to use Scum ever I'll have to get them myself!

Anyway, my list was the same I ran in the last session at the end of Jan. It seemed pretty fun and I wanted to get used to using the K-wing so figured why mess with it?

What's not to love about B-wings with AS? The only thing I don't like about them is they make the X-wing pretty much obsolete which is infuriating in a game called X-wing! They just don't compare when they're basically the same points. Anyway, Miranda Doni seems interesting to me with he ability to regenerate shields. It's even better with the TLT because you don't really sacrifice damage output to do it. I think an array of bombs is good too. Having the Conner which you can drop after SLAM is awesome but so is the Ion for shaking chasing ships.

Battle Report 1 vs. Matt
Matt was running a list he said he threw together pretty quickly but featuring the ever annoying Whisper:

Matt would get initiative thanks to the 99 but it made no odds as we had no matching PS. Matt deployed pretty spread out so I shoved everything over to one side with the B-wings paired up on the right flank and the K-wing to the right of centre. 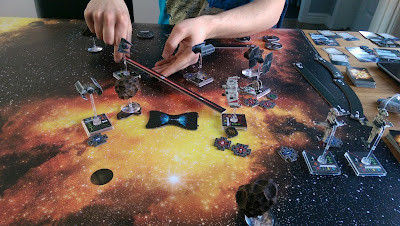 After the usual first round of no-one shooting, I blasted the K-wing forward with a 3-speed SLAM and dropped a Conner Net right in front of the oncoming Imperial Ships. Meanwhile the B-wings locked up the Academy Pilot but left it limping along with 1 HP. In response attacks from the TIE Fighter stripped some shields from Miranda.  The Conner Net was easily avoided but it did force Matt to focus on evasive manoeuvres rather than lining up shots.

Whisper closed to range one on the K-wing and took it deep into hull. Miranda turned back to the backfield but not before using the ion bomb to great effect hitting both TIE Advanced and forcing Whisper to barrel away. The B-wings needed to help take the final hull from the TIE Fighter when Miranda failed with her turret (thanks to the Academy Pilot's focus). At least the K-wing got a shield back. 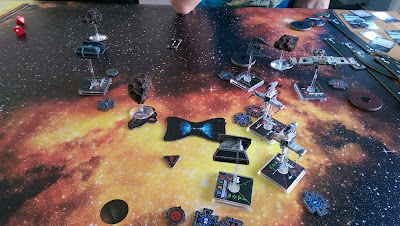 This next sequence was simply awesome from where I was sitting (less so for Matt). Miranda swerved to avoid an asteroid allowing her to drop a Conner Net right in front of Whisper. Since the decloak barrel roll would've either landed him on an asteroid or the other Net it forced him to stay cloaked and koiogran straight over the new Net for damage and ion tokens. The ion tokens from the previous ion bomb forced the Tempest Pilot to keep heading away from the fight and left Maarek Steele as a total sitting duck to a range 1 attacks from both B-wings which was enough to wipe him out completely. Matt was now down to two ships but one of them was still Whisper (even if he was ionned). 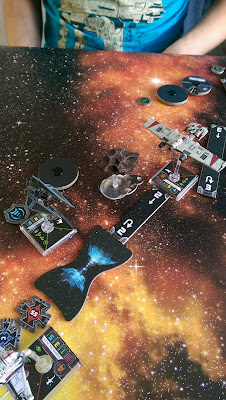 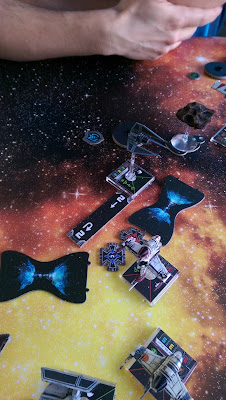 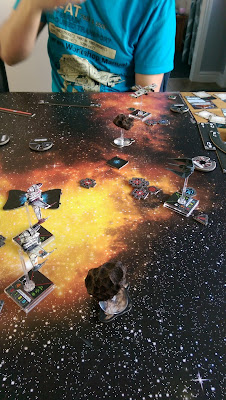 A koiogran for both B-wings now left them in range of Whisper who'd they'd target locked thanks to Advanced Sensors. The K-wing dropped another ion bomb (Extra Munitions is awesome) before blasting away but forcing Whisper to decloak to barrel roll out of the way. This put him right into range 1 of the B-wings who survived Whisper's onslaught and wiped him from space. 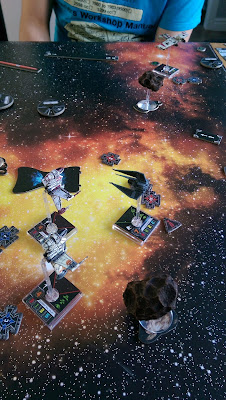 Matt now had just the Tempest TIE Advanced against my entire fleet including a quickly repairing K-wing. Still, the plucky pilot was able to finish off one of the B-wings before being backed into a corner and shot to pieces by the remaining one. 100-25 win for me! 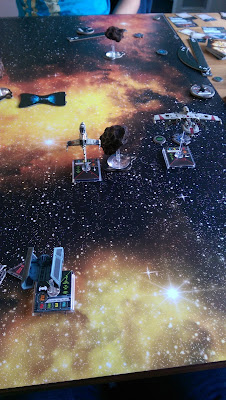 Battle Report 2 vs. Scott
Scott had demolished Sam and was hoping to do the same to me. He had a veritable swarm of rebel ships: 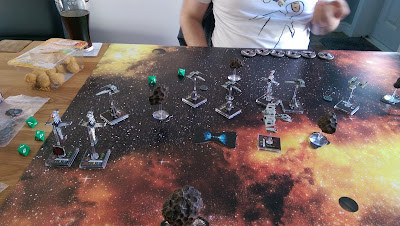 Scott won the iniative roll off which meant he had to deploy everything before I did. I therefore positioned my B-wings opposite three of his Z-95s hoping to take a couple down before he could get the rest of his squadron into range. Sadly the K-wing in the centre diverted his attention and he dragged two of the Z-95s over to the middle leaving just one to be picked on by the B-wings. Somehow it survived on one hull but Scott misjudged and ended up flying it off the board. 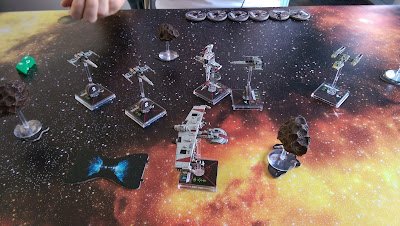 Meanwhile the K-wing had tried to repeat the trick from the first game and swept forward with a 3-speed SLAM move to drop a Conner Net in from of the enemy fleet. Unfortunately Scott judged his moves perfectly and this left the K-wing in range of most of his squadron and down to a single hull point! 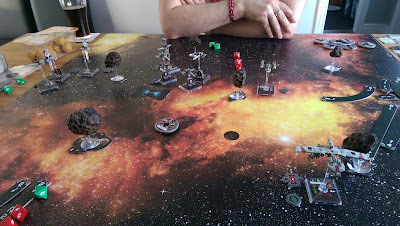 In a bid to stay alive I SLAM'd the K-wing again but forgot to drop an ion bomb before I did so. I'd managed to get out of range of most of the enemy squadron but the Y-wing was in range and its TLT had no trouble taking the last hull point. With the K-wing down the B-wings would have an uphill battle to pick off ships before being destroyed themselves. This was especially difficult when I'd split them up on the previous turn not knowing Scott would fly the damaged Z-95 off the board. 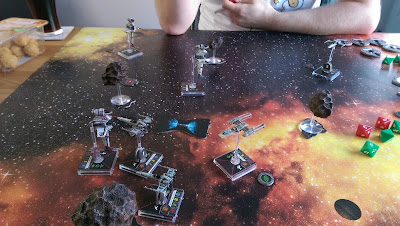 The B-wings never managed to get any sort of focussed fire in and damaged several enemy ships without taking any out. Scott positioned his ships well and got some range 1 shots in from the Z-95s which really hurt when you're agility 1 and when Scott was rolling so well. The first B-wing quickly fell and once that happened it wasn't long before the second followed suit. At least he took another Z-95 down with him! This gave Scott a 100-24 win leaving him undefeated as we ran out of time for more games. 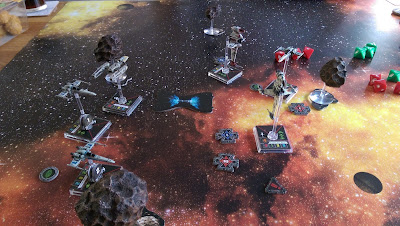 Conclusion
Two completely different performances there. It's difficult to know if it was down to my play or if my list isn't really suited to swarms. The Z-95s don't seem tough to kill but it's easy for them to end up holding on to a single hull point and combining to deliver quite a lot of damage. Whilst I made a huge mistake placing my K-wing where I did for what proved to be a pointless Conner Net, I have to say that Scott played it well and always had shots on me.

In contrast the first game was probably the best game I've played from a tactical point of view. Of course there was some luck involved but I used the bombs brilliantly (if I do say so myself). It's easy to forget that Whisper is so flimsy when you're used to seeing 4-5 evade dice with focus! It certainly wasn't the best list Matt has ever put together but he basically wanted to try out the new TIE Advanced stuff which I think will be really effective. Still, it was one of the few times in memory that I've some completely beaten Matt at anything so I'm happy regardless!

Playing Scott was refreshing too as I hardly ever get to fly against Rebels. I really must get to more tournaments. Speaking of which, any thoughts on my list? I'm not keeping pace with the meta or anything, how would it fare? Do people even take Daggers with AS any more or is it Accuracy Correctors or something else?

Even if I didn't really enjoy the Epic game earlier in the day, these small games reminded me why I love this game so much. I can't wait to try out my Ghost which I got with my 40K tournament winnings the other weekend. I'm also reading about the T-70 X-wing at the moment and salivating at the prospect of some FA ships, maybe even a Falcon re-release? In the meantime I was getting sick of all the plastic bags so I've pinched one of my bits boxes for this: 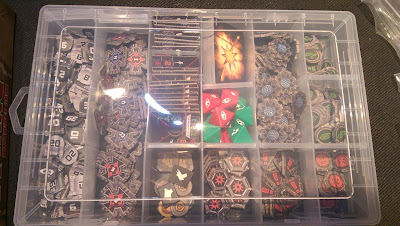 I really need to come up with a better solution for ship storage too. More on that another day. Right, back to Dark Eldar!
Posted by From The Fang at 17:00:00