In my last post I listed out some of the armies I'm thinking about for Double Trouble. I hope that I only need one of them! I'll therefore be aiming to get my Dark Eldar finished ready for the event. As with my Imperial Knights project, the need to get them ready for a tournament will be my motivation to get them done. Anyway, here's a shot of how the models looked before I started: 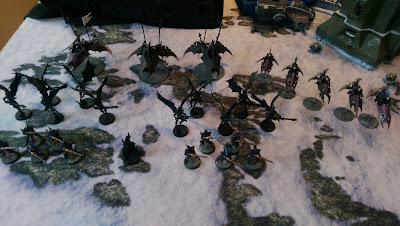 As you can see they're assembled but barely painted. There's some colour on one of the venoms and patches on the reavers and warriors but the other venoms, scourges and archon are just undercoated.

Before I can get any paint on them there's a few things I want to sort out though. You may remember I did some conversion work to give haywire blasters to 4 scourges in each squad. I'm looking back at that post now and wondering why I didn't just take the front bit off the gun and make my life easier!?! I took this opportunity to use some basing beads to make these guys more stable. The beads are basically just lead shot that I bought from eBay a little while ago. A liberal amount of super glue into the base is all it needs. Makes a massive difference to stability. I still use pennies for my non-slotta bases mind you because the costs are lower (1p per base funnily enough). Really wish I'd done this before gluing the models into the base but nevermind. 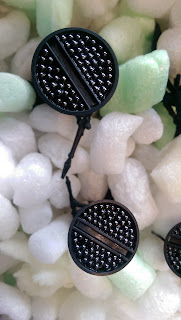 Anyway, the archon currently has the wrong weapons. I've therefore carefully (not easy with finecast) broken off both arms and replaced them with a splinter pistol and agoniser. I was tempted to try and magnetise him but I wasn't confident that finecast would cope with the necessary drilling. Here's how he looks now (there's paint on the agoniser because a hekatrix lent it to him): 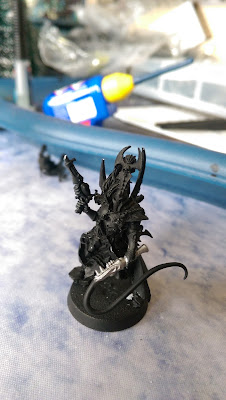 Next up I wanted to add a bit of variety to the reavers. I'm keen on keeping all of the visored helmets but I've thrown in a couple of hand weapons to break them up a bit. I'll also differentiate more with the paintwork. The caltrop model is the one with the ponytail to help me identify him quickly. 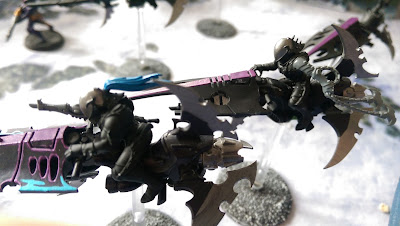 Finally, whilst I initially thought the ball-top flying bases were an amazing idea, I find that on some of the models they don't give a very tight fit. I was considering adding layers of paint to make the ball a more snug fit but in the end I've decided to file down the ball and add a 5 mm magnet to the top. This makes a really stable join. I lose some of the poseability but I wasn't really making use of this anyway. I've done the same to the venoms too: 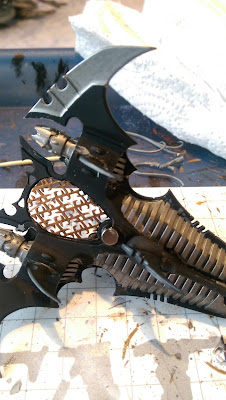 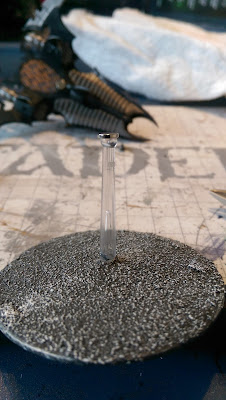 That's all the preliminary work done now. I've really got to decide what colour to paint them! I was extremely tempted to go for orange again after the success of my Imperial Knights and also thanks to inspiration from Rovient's stunning collection over on Tale of Painters: 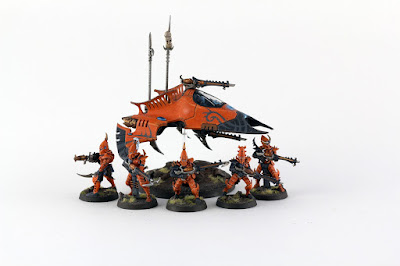 I was originally planning on making them purple though and I'd still like a purple army. I'd love to think they'd end up looking something like Stahly's (also on Tale of Painters): 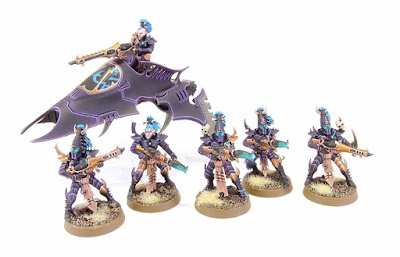 You may remember I painted up a test model a while ago. Holy crap! That post was July 2012. That's a depressing thought. No excuses this time. I'm getting them done! Anyway, I like the scheme I painted four years (!) ago but I'm not convinced it stands out enough on the table top. I'm thinking I might merge Rovient's bold block colours with Stahly's clean line highlights. Perhaps some bold purple panels on the venoms?

Think I'll do a reaver as a new test model. Gives me chance to do the rider as a test for the infantry scheme and the bike as a small scale test of the vehicle scheme. Hopefully it'll take me less than four years!!
Posted by From The Fang at 17:00:00