Well there's been plenty of progress in just under a week since the last post so this'll be a long one. I've had to make some decisions about what's a priority though as I'm rapidly running out of time. I'll talk more about that at the end of the post but for now here's what I've been up to.

First up washes! I carefully went round all the orange panels with a fine detail ("0") brush and some Agrax Earthshade. This makes quite an impact on it's own: 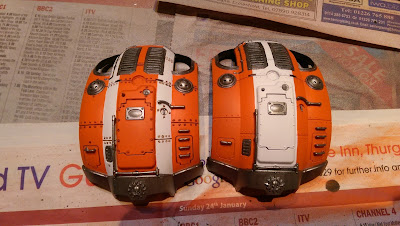 It gives much definition to the panels and already the model starts to look a bit weathered. Here's all of the panels post Agrax Earthshade: 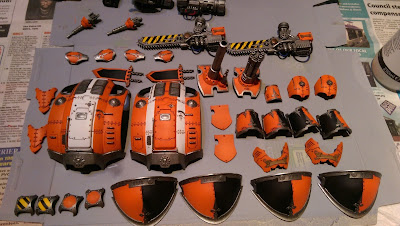 More washing next in the form of Nuln Oil across all of the metalwork. I decided to hit the metal pretty hard with the shade as I think darker metal will look better against the orange and white. What do you think: 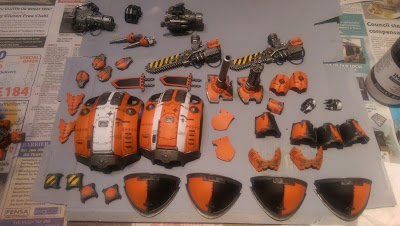 Once all that was dry I decided it was finally time to start gluing the armour panels in place and see how these fellas are shaping up. Here goes: 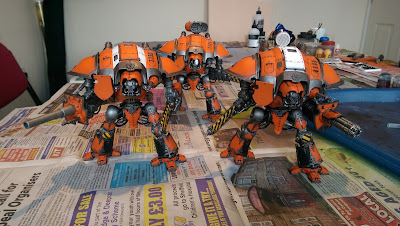 You can see my unloved original knight in the background. I'll hopefully find some motivation to finish him (and the as yet unassembled knight) in the near future but for now I'm ploughing ahead with his two new brothers. Before I can put the helmets on I needed to paint in the eyes and while I was at it the cockpit glass. I used Caliban Green, Warpstone Glow, Scorpion (Moot) Green and then White Scar on the eyes and Regal (Kantor) Blue, Russ Grey, Fenrisian Grey and White Scar on the cockpit (followed by 'Ard Coat). Incidentally my pot of Scorpion Green must be 20 or so years old now and it's still flowing fine. Guess they really don't make them like they used to eh? 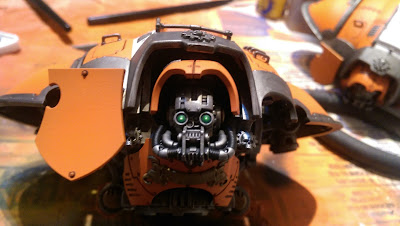 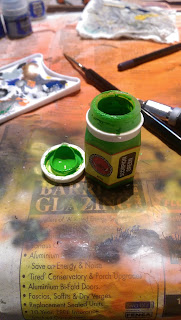 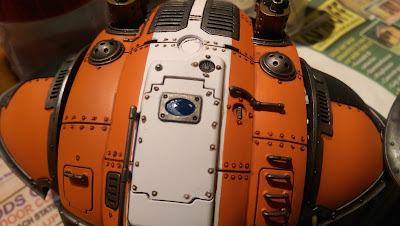 With those out of the way I now wanted to add some soot to the ends of my guns in the form of a Mournfang Brown drybrush followed by an Abaddon Black drybrush. Thanks to Ron over at From the Warp for some pointers. You really ought to look at his stuff. He may not blog any more but he really helped me out on the blogging front early on and his tutorials are excellent. 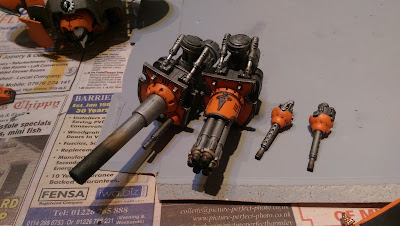 I'm pleased to tell you I went with two-tone black and white faceplates and I'm very pleased I did. They stand out much better than the orange ones and fit with the Mechanicum theme nicely. Speaking of which, you can see in the images below that I also painted in the cogs on the front of the carapace. 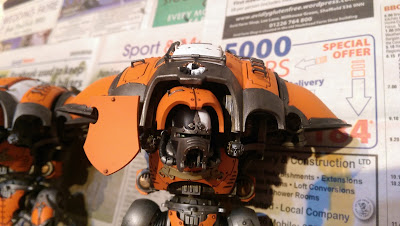 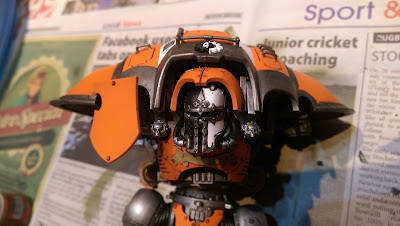 Next up the scrollwork on the chest plate and the back of the chainswords. These are Zandri Dust (washed with Agrax then reapplied), Ushabti Bone then Screaming Skull. Obviously the house name will go on the chest but I'm not sure about the scroll on the swords and there isn't a transfer so it'll be freehand. Any suggestions? 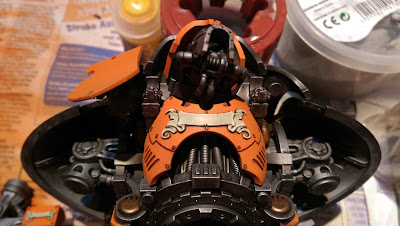 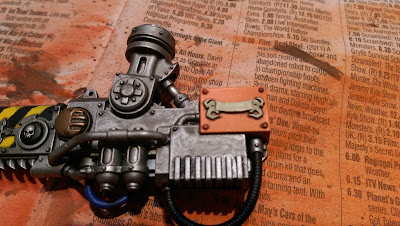 Here's where the nights were up to once painting was finished on Sunday night: 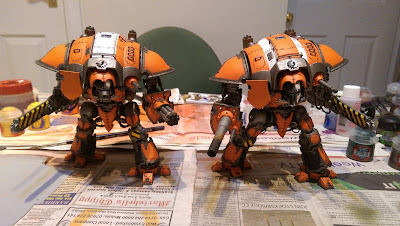 Next up, transfers! I followed the schemes laid out in the codex and instruction book and added a few random ideas of my own. I'm using House Raven since (a) my freehand skills aren't stunning and (b) it'd take too long to design and paint a custom house. I'll come up with some background as to why they were originally from Raven aligned to Metalica but defected to Ryza. Anyway, after a few hours and a decent quantity of Micro Set, here's how they look now: 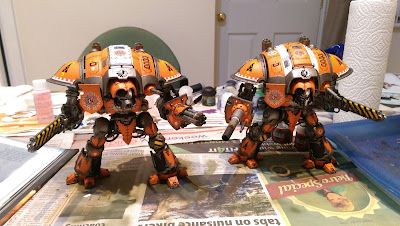 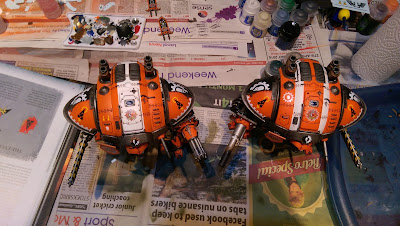 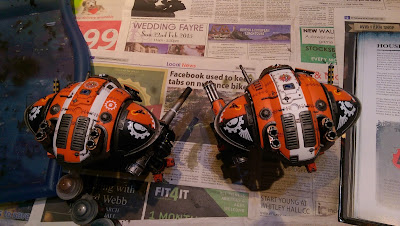 The latter shots probably get the true colour of the orange across better. It's tricky to get good shots of them without lighting the undersides so the camera on my phone tends to make the orange look more yellowy when compensating.

I need to add some white paint to the edges of the shoulder pad transfers to tidy them up and fill in the gaps where I had to trim around rivets. I also need to paint back in some of the house emblem from the shield on the Princeps which got damaged when applying. I don't think you'll notice these eventually. Anyway, once that's done it's a coat of Lahmian Medium to seal them up and Robert's your mother's brother! Oh, I've also done the banners which you can just see in the back of the shot there. Better pictures of them later I promise.

Right, we're onto the home stretch now so let's talk about those decisions I've had to make. Firstly, as I've mentioned I think the metal work needs to stay dark to contrast against the orange. I'll need to highlight it though but probably just with Leadbelcher I think. The orange and black also need highlighting but I decided that this would be incredibly time consuming and therefore something that will have to wait until after the tournament (read: probably never get done). Similarly, I wanted to weather them but that would have to wait until after highlighting and therefore won't happen before the event.

So what is left to to? Well I noticed tonight that I need to paint in the lenses on all three of the heavy stubbers and I ought to add soot to the heavy flamer too. Once that's done I'm all about the base. I've got Matt coming around tomorrow to try out Star Wars: Armada (which he got for his birthday) and then squash on Thursday. That means just tomorrow during my son's nap plus Wednesday night. Friday I hope to be getting ready for the tournament and then spending time with my beautiful and very understanding wife! Not long to get things done then!
Posted by From The Fang at 23:42:00