More progress from Sunday night's post to report. It just about killed me but I've done all of the Leadbelcher on all of the armour panels and around the feet etc. It was pretty soul destroying painting around all of those little fleur de lys type bits on the bigger panels but I got there in the end. 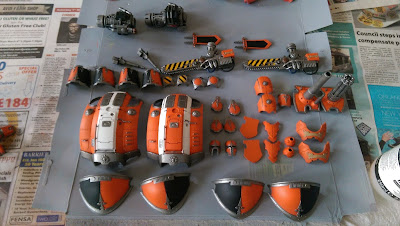 Here's a shot of all of the panels now that they've had their metal frames done. It really make a difference to the look of the panels particularly the hatched knee pads: 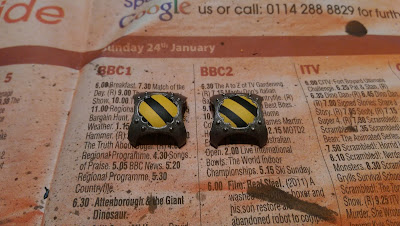 I also neatened up the feet and added some black to the guns to break up the Leadbelcher. 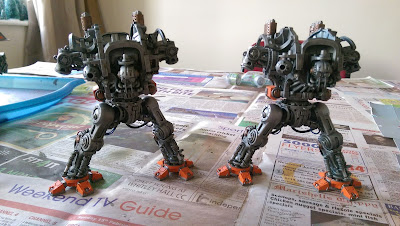 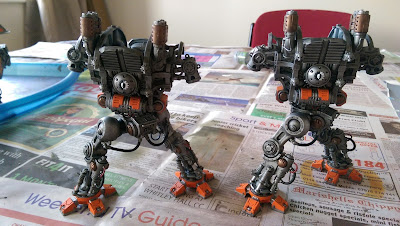 There's a huge amount of work left to do on these guys but once again I thought I'd clip/bluetack some the panels on to give me a better idea of my progress: 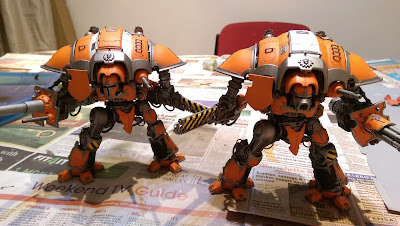 When you look at them like this you really see the effect that just one more colour has. Worst case I can now take them to the event looking semi-finished but I really want to get a lot more done. Next step is washes. I'll be hitting all of the metalwork with Badab Black and then the panel lines with a careful coat of Agrax Earthshade. Hopefully that will be done by the weekend so I can start doing some highlighting. All of the decorative metalwork will be made brighter whilst the functional stuff will just get a bit of Necron Compound. Then it's Fire Dragon Bright on the orange and Dawnstone/Administratum Grey on the black. Doesn't sound much but there are a lot of panels to highlight!

If I can get all of that done I can start applying the transfers and work on the bases. I'm now getting down to a week and a half left to get these bad boys finished. My initial optimism for the project is starting to wane somewhat.

Speaking of transfers there are a couple of things I want to hear you guys' opinions on. Firstly the transfers. They'll be mechanicum stuff of course but what house should I go for? I was thinking Raven since that's pretty much what they're based on (but orange rather than red). I do think that I ought to come up with a house Tangryx logo though. Sadly, I lack any artistic talent so that's pretty much totally out of the question.

The other question is should some of the panels be painted a different colour to break up the orange. I'm thinking of the helmets in particular. My first knight had a white and black faceplate since I used t the mechanicum skull. Perhaps these faceplates should be done the same? Alternatively the hoods (or whatever you want to call them) could be painted black to contrast the faceplates. I think I'm leaning towards the black/white faces though. Thoughts?
Posted by From The Fang at 23:54:00