Well firstly, apologies for the sporadic posting of late. It's a combination of factors as ever. I'm trying to put my free time into painting instead of blogging. The other big thing is that I'm really struggling to get excited about new releases of late. The weekly release cycle has taken some of the intrigue away and I find it tough to get enthusiastic about a couple of new models for one of my armies here and there. GW have got themselves into a bit of a hole at the moment from where I stand. With the exception of Chaos and Sisters, they haven't really got any armies at moment that require a massive overhaul of rules and models. I'd argue that sisters don't need much work on the rules either.

It's ironic really that we were all clamouring for rules in WD again, more regular releases and more stand alone games. Now that we're getting that it's having the opposite of the desired effect on my enthusiasm. The models for Deathwatch look great but I can't face another board game with unpainted models. Perhaps that's because I'm so in love with X-wing and the pre-painted models there are more than good enough. I suppose the key is that I don't want to add more grey plastic to my collection. I want a cupboard full of at least gaming standard models that I can look forward to using in battles. To that end, enough rambling, let's look at my progress on the DE so far.

I'm really torn on the colour scheme still so I picked up a line drawing of a Kabalite Warrior and had a play with a colouring app on my phone to try and come up with something original. I created an interesting mix of off-white and purple that looked really good on the picture. Trouble was, I wasn't blown away when I tried to apply it to a real model: 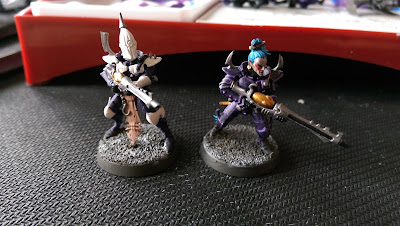 Now, obviously it's tough to tell from just base coats but I'm just not really feeling the love for it. I do, however, still like my original paint scheme plan as shown on my now several year old test model on the right. I therefore tried to apply it to a reaver jetbike to see how I felt about it. 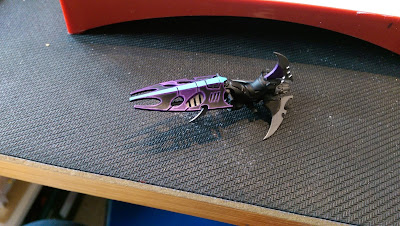 Painting this convinced me to stick with my original scheme but I thought it'd be good to try and apply the same blue stripe to the entire force. Here's what it looks like added to one of my more painted Venoms: 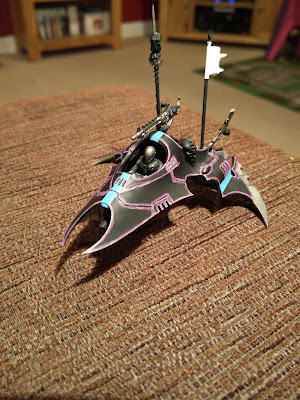 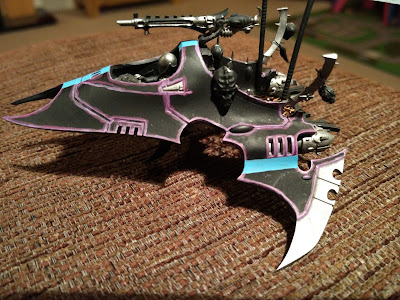 The paintwork needs a bit of tidying up here but I'm happy with the general effect. I'll then try and continue the ice blue stripe down the middle of the warriors' and scourges' helmets. I think the purple needs to come through a bit more strongly too so I went for random panels on the reaver canopies to break them up a bit and make them more individual: 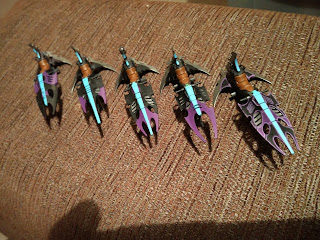 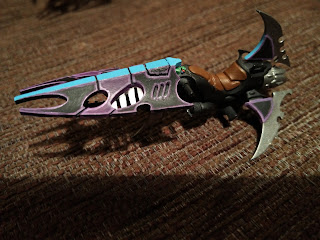 I'm pretty happy with the way this comes across. You'll notice I continued the blue strip onto the rear fin as well. Not decided what I'm doing with the reavers' helmets yet. Think it'd look too much with the stripe continuing through. As you can see I've also started on the seat cushions and painted in the controls. I'm toying with bringing in some of the off-white on the weapons but will have to see how it looks.

My problem now is that all of the colour scheme indecision has put me quite far behind schedule. I was hoping to be sat here with finished reavers at this point but I still haven't got anything off the table. Here's what I've got to get done in the next 9 weeks:

Anyway, hopefully your Double Trouble armies are coming along better than mine. If you haven't got your ticket yet there's still time. Head to the DT page now for more details.
Posted by From The Fang at 17:00:00