In the last post I'd done a massive chunk of the airbrushing of the armour panels. With the Troll Slayer Orange laid down I now needed to block out the Abaddon Black halves of the split panels. Incidentally I'm trying to follow the codex system of painting for a mechanicum knight. It's basically the same but with orange instead of red. 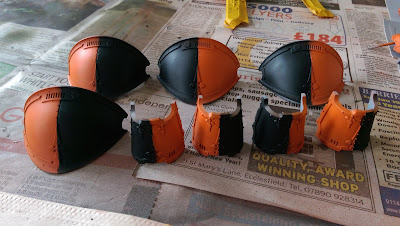 Speaking of which, the two knights in question will be a Princeps and a Baron so they need their appropriate go faster stripes: 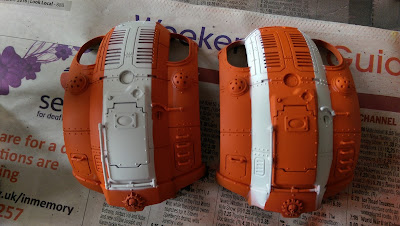 The masking wasn't perfect here because I was stupid enough to put the handrails on before painting. With a bit of tidying up they look much better though and once the metal is painted the imperfections will be barely noticeable, especially when the washes and highlights are down. 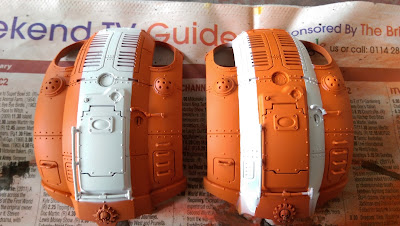 Whilst I waited for the airbrushing to dry I went back to the skeletons to tidy up the parts where I'd sprayed on some orange armour plates to add interest. They look much better now they've been neatened up but washes and highlights will be needed to finish them off. It's at this point I start to wonder if the brassy parts of the skeleton need to stand out a bit more. I'm probably going to go for Hashnut Copper at some point but that can certainly wait. 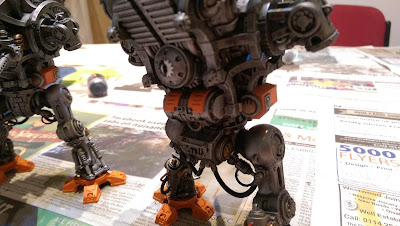 Next I needed to add some details with the airbrush such as the hatching on the chainsword and one kneepad per knight. Fortunately my 3 mm tape arrived from eBayland on Saturday so I was able to get the hatching done this weekend which was a nice bonus since I wasn't expecting it until Monday. The tape isn't perfect mind you, it's more like insulation tape than masking tape. It does the job OK but it's trickier to work with and doesn't follow fine details as easily. I think it's intended for use on full size cars rather than model vehicles but I'm happy enough. Certainly a lot quicker and neater than trying to freehand the lines anyway. 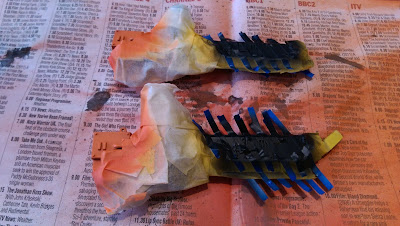 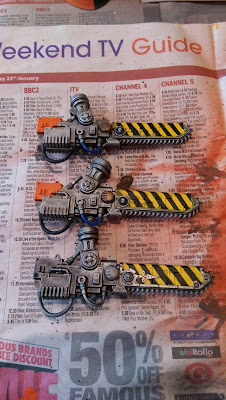 The second picture shows my first knight's chainsword at the bottom for comparison. I think I made a pretty decent job of the freehanded lines but they're nowhere near as neat or uniform as the airbrushed ones. 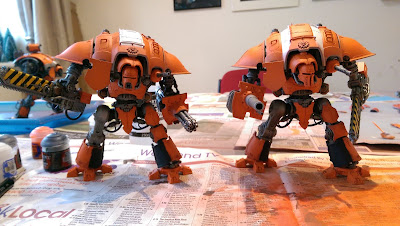 For a brief morale boost I threw the majority of the armour panels onto the skeleton to convince myself I was actually making some progress. When you're just looking at a pile of components it can be difficult to motivate yourself. At the moment they definitely look too orange but once the metal frames of the armour panels are done they'll be toned down dramatically. I still want the orange to make them stand out mind you. 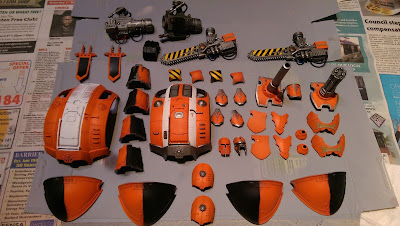 Speaking of the metal frames I've now actually done quite a decent amount of the frames. This has meant I can now assemble the gun faceplates making the pile of components seem smaller. That's probably the last bit of sub-assembly I can do before I start gluing the armour panels on nearer to completion. As you can see in the pictures below I've also added some black to the ammo hoppers on the main guns and airbrushed the interior of the banners. Both of which will need some tidying up but I wanted to try and get the airbrushing out of the way. 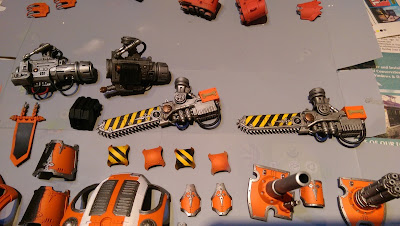 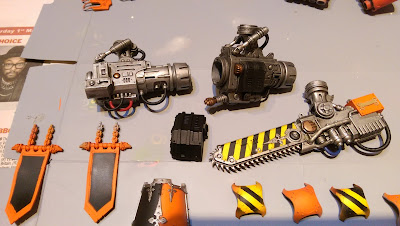 You can also see the knee pads that I hatched. They too will look significantly better once the metal frames are painted in. It's incredibly dull painted Leadbelcher for hours on end though so I'm finding little bits to break up the monotony. Today it was adding Zandri Dust to the scroll work on the chest plate and back panel of the chainswords. 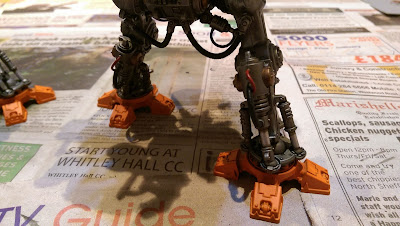 So what's next? Well, as you can see from the picture above, I still need to tidy up the orange on the feet which should tone them down quite nicely. That's just one part of the hugely monotonous Leadbelcher application that needs to happen in the next couple of days though. I'm confident that I can get all of the metal based before midweek followed by some washes and highlights to finish off the week. If I can get all of the metalwork finished this week I'll feel a lot more confident about finishing but I'd still love to get all of the armour panels washed too.

These pictures make it seem like I'm making pretty good progress but frankly there's a deceptively large amount left to do. The big satisfying bits will soon be gone and it'll be down to fine details that take ages but ultimately aren't as dramatic. Still, this is the most consistent hobby progress I've made in months (if not years) so I can't knock it. It's refreshing to be able to blog about hobby stuff for a change too.

Plenty left to do before the 12th though and March will be with us by Tuesday!!
Posted by From The Fang at 22:42:00