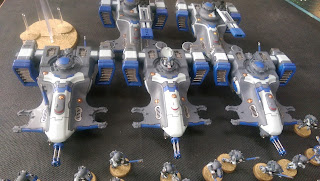 Not the most thrilling subject ever but it represents progress on my Tau update project. Let's remind everyone again that we're talking about models that I've had for a while that I (stupidly) painted before I owned an airbrush. They're not the neatest assembly jobs either. Nevertheless I'm making great progress in tidying them up and making them look at least passable.

The next stage in this drive for improvement was to paint in the panel lines. I'm doing this in black to really make the gaps stand out and also because black covers a multitude of sins. The first models to get this treatment were the Devilfish. I heavily thinned Abaddon Black with some acrylic flow improver and used a detail brush to hit the gaps. Inevitably there were some areas where things got slightly messy so I went back with the original colours (or close in the case of the dark grey) and tidied things up. 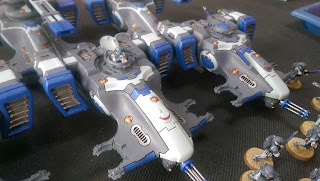 Let's be realistic it's not a monumental difference but I think when you compare it to the
Hammerheads, which have yet to receive this treatment, there's a noticeable improvement. The Hammerheads will get this treatment next, closely followed by the piranhas and the Sunshark. The Sunshark needs some more work in other areas too but I can get them at the same time. I think I'll just stick to doing this on the vehicles (and their drones) for now as the suits will take a lot of time for minimal difference. 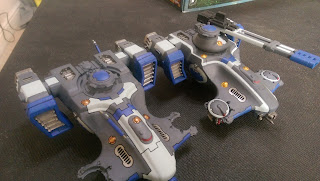 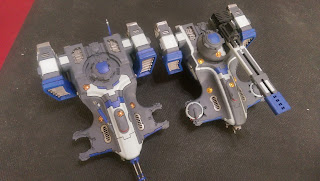 The next stage once the panels are done is going to be transfers. I know this is skipping a few steps really but I want to get an idea of how they'll look when finished and give me an idea of where best to put the sept markings. As I've said I'm going to give the Devilfish sept markings matching their squads so that there's some coherency. Not only that but I think the transfers will make a more significant difference than the line highlights will. They'll also take significantly less time to achieve!

Whilst doing these lines I've noted a few little details that I'll need to come back to at some point e.g. the targeting lens on the burst cannon and the cockpit windscreen. Anyway, this is probably the best hobby stint I've put in for a long time so I'm hoping I can keep up the momentum.
Posted by From The Fang at 19:32:00