Bringing Back the Fun 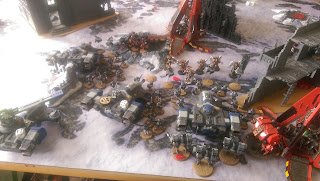 Matt and I have managed to get a couple of games in over Summer since he's on his six week holidays from teaching (git). We played a game with his Necrons against my DE in a Fluffageddon test game and basically called it on Turn 2. It was totally miserable. I know no-one enjoys losing but seriously it just felt impossible. Obviously the Fluffageddon rules don't exactly help DE but still, it was probably a low point in our 40K gaming. We decided that for our next session we'd do something we hadn't before and actually discuss our armies with each other in advance. Normally we're practicing for a tournament or testing things out for Blog Wars but since I've not changed much for BWX and we aren't booked into any tournaments we could actually have some friendly games.

We decided to play a classic matchup of Tau versus Blood Angels (we played this a lot when we got back into 40K in 2009) and then a game of CSM vs Space Wolves. We were deliberately toning our lists down from the usual tournament standard and taking units we wouldn't normally use and conversely dropping some we normally would. That resulted in some classic looking lists. My Tau were pretty mech heavy with a few suits and the SW army consisted of Grey Hunters in Rhinos and Terminators in a Land Raider!

Well, you know what? Those were two of the best games of 40K we've had in a long time! The BA vs. Tau game swung dramatically as ever with Tau cutting down swathes of marines early on and the BA hitting back hard in combat. I was screwed a bit by the tactical objectives I pulled out (we used the BW ones) but basically I had all my luck early on and Matt's came in towards the end when it mattered. Dante was a beast and he got lucky staying locked in combat with my Fire Warriors who pulled out some Insane Heroism (double ones). I tried to kill the BA off quicker than they could get to the Tau in combat but it wasn't to be. You forget how fast jump infantry can move!

The SW vs. CSM game was almost 5th edition in appearance with both of us having three rhinos and a land raider. I had thunderlord and Matt had some obliterators to prevent them being identical. Early on it was a case of brinkmanship with neither of us wanting to dismount from the rhinos too soon. I actually popped smoke on a vehicle for the first time in ages! Anyway, eventually the rhinos started exploding (they're pretty tough these days) and we had men on the ground. There were some brutal combats and equally brutal psychic attacks from Ahriman and Typhus. It came down to just a handful of models. My land raider limped through on a single hull point to try and incinerate some thousand sons only to succumb to weapon virus and lose the final hullpoint! Typhus eventually won the combat against my Thunderlord (he needed help from the Chaos terminators!). When the dust settled we had a damaged rhino each but the only other survivors were Ulrik and a couple of Grey Hunters! Since we were playing Cleanse the Xenos (from Blog Wars) that gave me a narrow victory!

With the postponement of Fluffageddon we've decided to book a couple of tables at WHW and have our own mini-tournament on the same day. Matt will be bringing Chaos (I think, he keeps changing his mind), Jamie is thinking Dark Angels (or some shade of Space Marine), Scott is taking Tyranids and I'm going to take Tau. Since it worked so well for Matt and I we've decided to show each other our lists. I'll talk you through my Tau in the next post.
Posted by From The Fang at 17:00:00