Killed by the Drones!

Points for anyone getting the reference there. Anyway, with my wife and son out for the day on Monday I decided to put in a hobby stint (well after I'd finished the list of jobs I was left with). I managed to get the drones done and decided to have a crack at some sept markings. 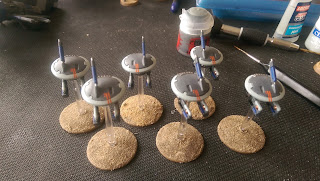 My first attempt, on a fire warrior pulse rifle, was far to thick and pale. I therefore decided to put some thin stripes of Mephiston Red down first on some drones. I then went over this with a couple of thin layers of Troll Slayer Orange. 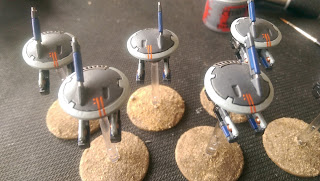 I'd probably get away with a single coat of Jokaero Orange since it's a base colour. However, I don't own any so who knows. I think they add a little bit of pop but they'll be of more impact on the vehicles since I'll be able to bigger areas. I thought I might put some transfers on them and then use them as effectively stencils for going over in Orange.

I think you guys are right too, the black in the panel gaps and highlights will make things look a lot better. That'll take a very long time to accomplish though.

So, from my list of jobs I've only got the following left:


Still plenty to do then! One thing's for sure though. I'll find it even more fun to annoy Matt with drones now they're painted!
Posted by From The Fang at 17:00:00