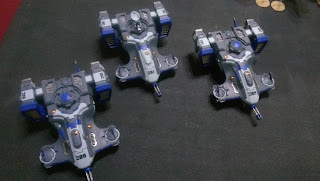 Thanks to a typically rainy bank holiday I was able to make some further progress with my Tau. With the panel lines done I decided that I should apply the transfers to my Devilfish before deciding where the sept markings should go and how large I should make them. The idea being that this way I'll avoid putting sept markings where I want transfers and vice versa.

I was torn between putting the Tau symbol on the nose or on the doors. I felt that both was too much but frankly I'm not sure what else you're meant to do with those large Tau symbols on the transfer sheet. Certainly some people seem to stick the large one on the nose but it didn't quite sit right with me. Instead I opted to put one on each of the three doors as I liked how the symbol on the blue background looked. 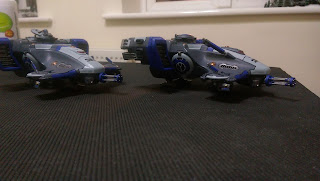 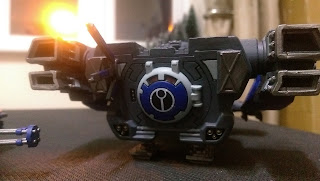 For the nose I decided to go with the numbers in Tau language as vehicle designations. By my reckoning they read 320, 321, and 322 but feel free to correct me! With hindsight I should've probably put 320 on the Ethereal's 'fish but it's a bit late to change it now. Anyway, the sheet gives you large numbers and a pair of corresponding smaller numbers. When you look through the codex these appear to go just above the side doors. That's all well and good for the ochre colour scheme but when I tried it with mine you could barely see them. I therefore went for the light grey panel on each engine and I think it worked out nicely. 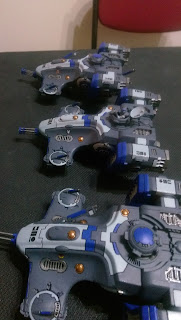 The last little detail was the multicoloured symbols on the left hand side of the fuselage just between the vent and the funny bump thing. There are six different types of these so I'll have three on devilfish, two on hammerheads/skyrays and one on the bomber. I struggled to find much use for the other transfers on the sheet. Obviously a big chunk of them are sept specific and whilst I'd have loved to go for a different sept the classic Tau symbol is on all of my fire warriors so I thought it would look odd. The rest of the transfers are sept markings (no good as mine will be orange) or random bits of Tau text. Someone over on ATT has translated them all but the main problem was that they're all in black which doesn't show up well on my scheme. I actually put the Y'Tau ones on the engines but no-one will ever notice so I don't know why I bothered!

Anyway, with so much hobby time I was also able to start and finish the panel lines on my hammerheads and I'm halfway through the piranhas too. I'd like to get that finished today and then make a start on sept markings. If I cant get the markings done I'll be happy that I've done most of what I wanted to do for Saturday. Wish me luck!
Posted by From The Fang at 14:18:00