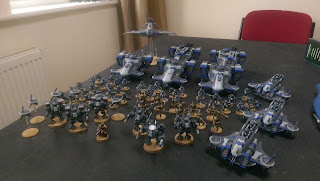 Well this post was meant to come in the middle of last week but I've been struggling to find the time to post. That's actually a good thing as I've been using what free time I do have to get some paint on my Tau. Here's a reminder of what I wanted to accomplish before our mini tournament on September 5th: 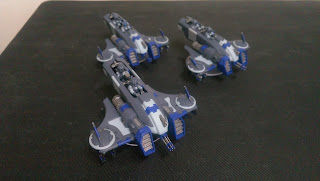 So far I've managed to magnetise the Piranha weapons, paint the Piranhas and started work on the drones. To be honest this is the bare minimum I needed to get done. Once the drones are out of the way I'll have everything at least with the main base colours on (blue, light grey, dark grey and metal). I'd also like to get the sept and squad markings done. The rest would be a nice bonus but we'll see how I get on. I can already feel my inner hobby butterfly wanting to flit to another project!

Anyway, here's some shots of the piranhas so far. The pilots aren't glued in at the moment as this will allow me to work on their control consoles sometime soon. 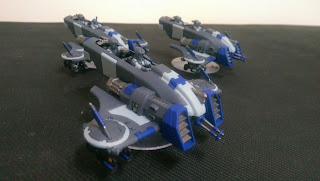 I think they look pretty decent and as you can see from the army shot above they fit in beautifully with the rest of the army. Clearly I need to get their bases done but that's not a big job. I'd hope to have it done tonight in fact.

I really like the Piranha model. It's a shame that it's taken this long for me to get them painted up and onto the table top for some games. They're actually a great unit for the points. For the minimal amount you pay for them you get 8 S5 shots per skimmer and of course the option to detach the drones to target two separate units. They're excellent as crowd control units and their speed is much needed for Tau who often struggle to cover ground in objective games. 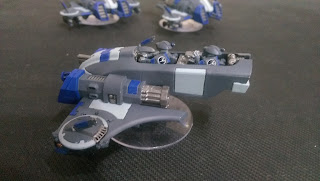 Anyway, the other little job I managed to knock off the list was to get the mouldlines on the tank engines cleaned off. They're still not perfect but they're a lot better than they were. Remember this is an army I've had since not long after I got back into 40K. They were assembled at a time when I didn't know how to trim them properly. For the most part they'd also been painted with Tau Sept Ochre as I intended them to be in the traditional T'au sept scheme. 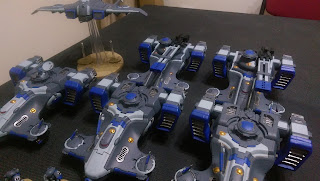 My main concern at the moment is that they don't really "pop". I hate that term but I can't think of a better one. What I mean though is that, whilst they certainly have a military scheme they don't really stand out. I intend to make the sept markings in bright orange which will help and the addition of transfers will bring them up a bit but I think they need something more. I'm toying with the idea of swapping the blue for red or changing the light grey for white. Both of which would take quite a bit of time. Any suggestions?
Posted by From The Fang at 21:02:00