I've recently posted about the rules pack for Blog Wars 8 as I wanted feedback from you guys. This has given me some great insight into what people expect from the event and helped me make some decisions about how things will be run. I'd like to thank everyone who's either commented or emailed me. One thing is clear, people want very different things from the tournament. Some want more restriction, whereas others want more freedom. Hopefully what I'm outlining below (and what I've updated in the event pack) will be some sort of middle ground that makes the majority of people happy and doesn't piss everyone else off too much.

Army Selection
My initial attempt at coming up with a system of army selection for Blog Wars seems to have frustrated a lot of people. Limiting the armies to just two detachments appears to have been a step to far for most of you. For this reason I've changed things a little so that you can now potentially take, for example: a combined arms detachment, allied detachment and Inquisitorial detachment. I'm now allowing formations but you have to choose between a formation and allies. I don't want people to be able to pick bits of things from too many sources. Not only does this make things incredibly confusing for their opponent (and me when I'm checking lists) but also it fits in better with the ethos of the event which encourages armies to be themed around a special character (more on that later). However, by allowing formations I am at least giving people more options if they don't have access to things like Allies/Inquisition/etc.

I'm still torn on the Imperial Knight issue. I'm determined that they should be allowed at Blog Wars now but I still think that 3 in a list with some other units would be very difficult for most people to deal with. What I've done therefore is met people in the middle and allowed 2 knights per army. As with any army in 40K, some people still won't be able to deal with them but equally others won't find them any trouble at all. Bear in mind that Gerantius is allowed as a special character but he isn't on the list as he's not going to eligible to be the "Commander" as he isn't in the "Core Force".

Hopefully this addresses the main issues people had with my first attempt at army selection. I'm keen to avoid changing it much more as players need to be planning their lists but I'd still like to hear your opinions. Here's an update to the diagram to show how things now work (click to embiggen): 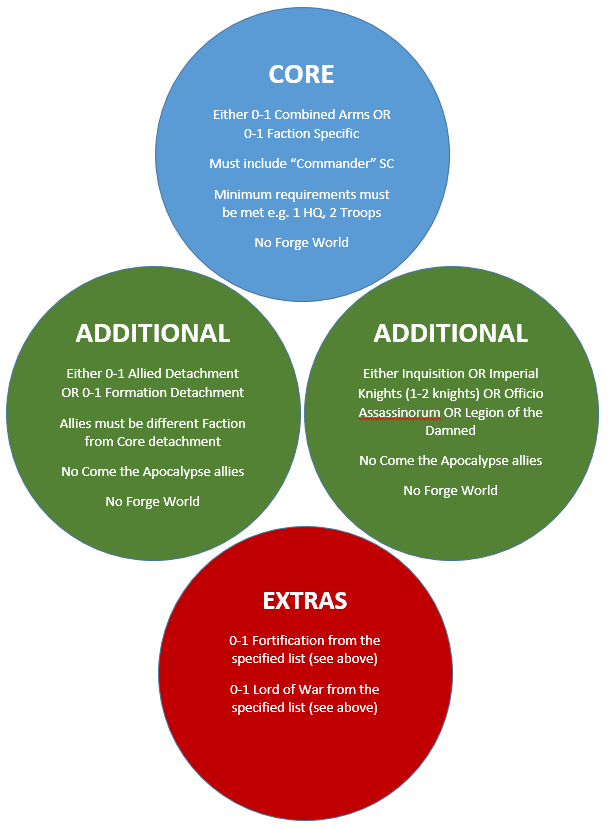 Warp Charge
I don't know if this just got ignored by people but there were no complaints about the restriction of warp charge to 12 points. As I've already said, I'd hope that the kind of lists that are penalised by this e.g. conjuration spam Daemons, wouldn't appear anyway but I still think this is a good idea.

Painting Competition
I recently posted about the painting competition here. I'd like to get some more feedback before I make a decision on what's changing there though so please read the post and let me know what you think.

Tickets
If you like the sound of things now and want to get yourself a ticket simply send £17.50 to alexjbrown58@hotmail.com via PayPal (ideally using the "Sending Money to Family or Friends" option). Please include your name (in case it's different to the PayPal account and I'll add you to the list.
Posted by From The Fang at 17:00:00