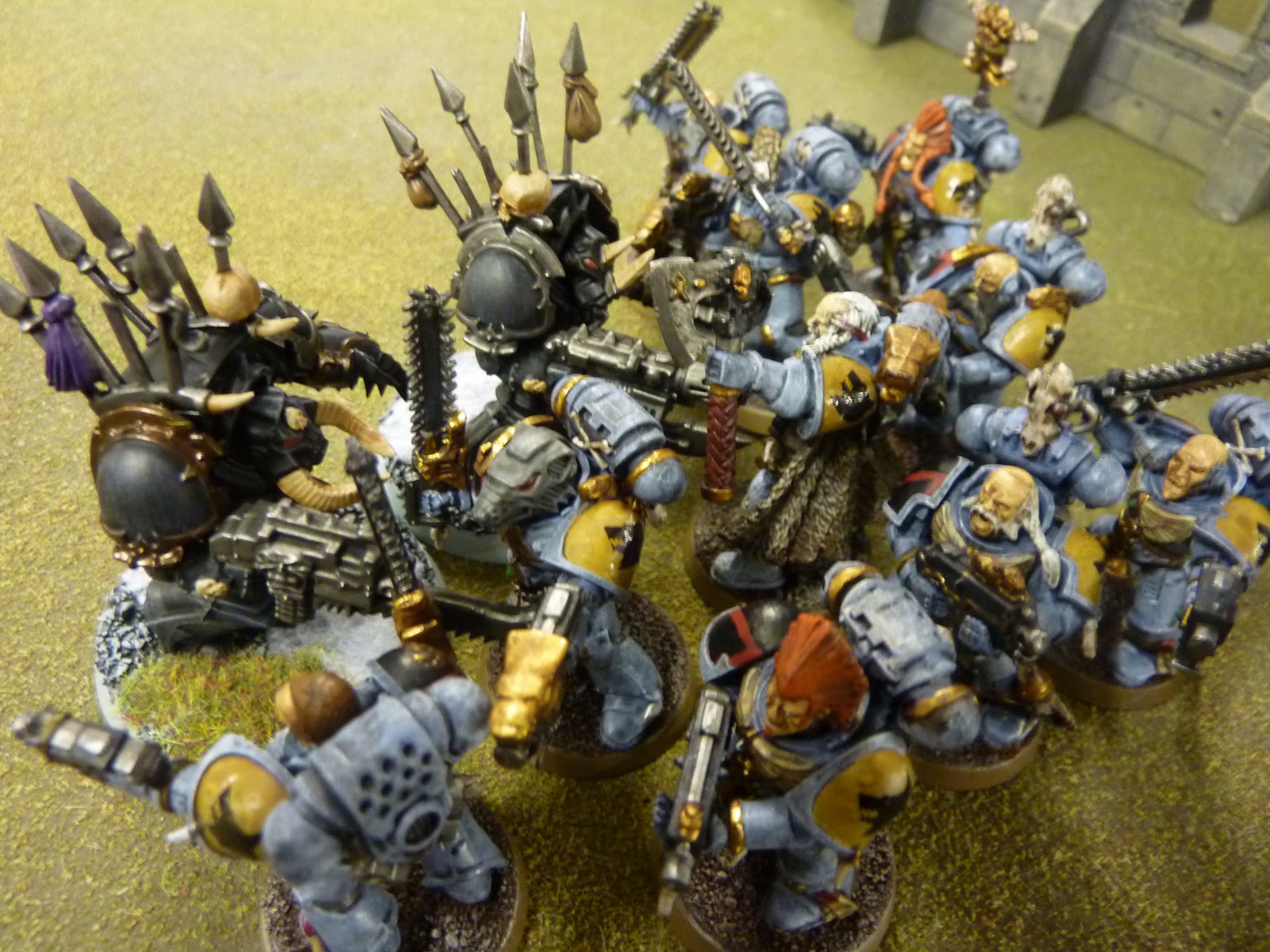 I've now had a decent number of friendly games and a tournament to get to grips with the new Space Wolves codex so I thought I'd share my thoughts. First off I'd like to say I'm still very much feeling the love for my wolves. Space Wolves may not have been my first 40K army but I've always had a soft spot for them and they're certainly my favourite now.

The tournament I played in allowed two detachments of any type so I took along two CADs of Space Wolves. This allowed me four HQs without sacrificing Objective Secured which I'm still a big fan of. Here's what I was running:

3x 8 Grey Hunters w/ chainswords, meltagun and terminator w/ fist/PF in a pod (one with standard)
5 Blood Claws in a Stormwolf w/ multimeltas

That's it. Doesn't look like much but it hits hard when it has to. The lord has six S6 attacks at I5 and a Hammer of Wrath attack at S5. He re-rolls to hit and wound which lets him shred troop units and gives him a reasonable chance against things like daemon princes too. The battle leaders are awesome against DPs though with their S10 fists and the fen wolf allows them to soak up the odd S10 shot that might come their way. I run them all solo so they're difficult to deal with. Your opponent will struggle to charge more than one allowing the others to pile in and help out if necessary. Massed shooting is an issue but it all comes down to how well you can roll 2+/3++. 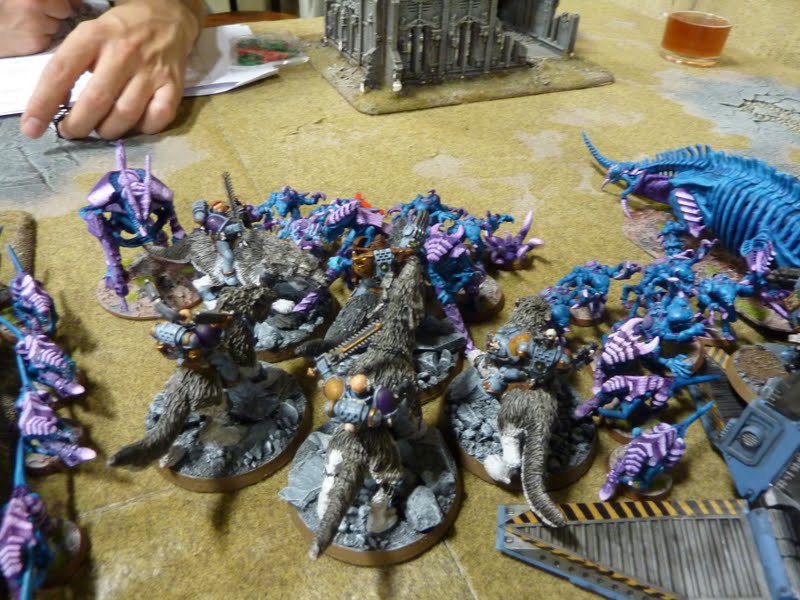 The hunters in pods aren't what they used to be but they're still awesome. Incidentally, it's worth noting that you can get a wolf guard pack leader in terminator armour with a fist for the same cost as a power armoured leader with fist. The difference is the combi weapon is cheaper for the terminator. Obviously not an option in rhinos and you sacrifice a second special weapon for the grey hunters (since you can only get 9 models in the pod) but still good to know.

In my friendly games before the tournament I was running a 15-man blood claw pack in the stormwolf with a priest but I quickly realised this was far too many points off the table at the start of the game. It hits incredibly hard when those 16 bodies get into combat but even if you get them turn 2 the stormwolf needs to zoom for a turn and then hover to get them in combat. Not only does it put it in danger but a turn 3 charge really isn't that exciting. The stormwolf is awesome and helfrost is scary even for models that only fail the strength test on a 6. Obviously it isn't reliable but things like that can come good and change the course of a game in your favour. Don't forget the flyer can hover late game to use Obj Sec to claim an objective. It's not invincible though so having just a 5-man squad is a lot less risk since they're all gonna die if the stormwolf gets taken down.

So how did it perform at the tournament? Well this event allowed Lords of War so in the first game I met a tyranid list with harridan and 4 FMCs. The S10 guns made short work of my thunderwolves and I simply couldn't down the FMCs quickly enough. The stormwolf killed the warlord tyrant on its own but it too fell victim to the S10 from the harridan. Obviously the list struggles against multiple FMCs but that's true of a lot of armies. The second game was against a warhound titan with some grey knights and an assassin. The callidus allowed a re-roll to Seize giving my opponent first turn. Of course he rolled 6s on the destroyer table for his first two shots removing my warlord and a WGBL. The mission was similar to Control Freak at Blog Wars though and so I held my own pretty well. My opponent's rolling was insane though and an uphill struggle ended in a narrow loss. With two narrow losses I ended up on the bottom tables and met a daemons list without any of the usual tricks in it. This gave me a fun game with plenty of combat and a decent win to place me mid table at the end of the day.

Following the event I've tweaked my list slightly. I really don't think the wolf standard is worth it in this particular list (and I'm not sure I'd bother generally). The extra 25 pts that gives me go into a fen wolf for the wolf lord and an upgrade to hammers for the battle leaders. That means they'll be striking at the same time as a monstrous creature if they get to a second round of combat thanks to Concussive. Might not save their life but should help them finish off the MC with their dying breath. 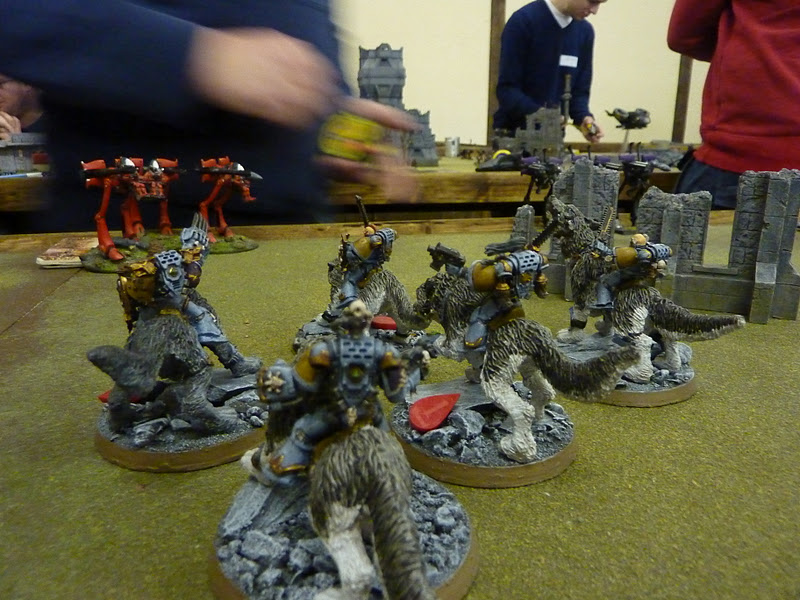 It's difficult to comment on the performance of the list when I had such bad luck with both my draws and dice rolls. In the first game I probably passed only 50% of my 2+ saves and in the second my opponent rolled an insane number of 6s. The last game gave me a hint of the potential of the list with two WGBLs going toe-to-toe with a Bloodthirster and coming out on top. One of them then went on to insta-kill a daemon prince too. The wolf lord chewed through karanak, 3 bloodcrushers and a squad of plaguebearers.

Obviously I couldn't run this list if the tournament wasn't allowing two CADs but it's helped me realise how useful Objective Secured is. Unless you're wanting to run a raft of HQs the Wolves Unleashed detachment isn't good enough to tempt me to drop Objective Secured. Despite the bad matchups the list held it's own and still would've won the first two games if the odd dice roll had gone my way. Neither felt like a whitewash.

I'd love to give rune priests a go but I'm finding it very difficult to write them into a list. I think there's a spot for them in a drop pod with some hunters but they'll often find themselves shut down by more powerful psychic armies. As I said in my review it's difficult to resist the temptation of a thunderwolf HQ. Even without any support they're still great for the points.

Finally, with this list at least, I'm really not seeing the point in using the codex warlord traits so I've been opting for the strategic table. This gives me a chance of getting some reserves manipulation for me or my opponent.

I'm determined to win the Best Painted award at the next event on October 18th so I've got some hobby work to do to update my wolves and add some much needed detail to them. I'll be posting about it soon starting with my stormwolf that I'm particularly proud of.
Posted by From The Fang at 17:00:00