Well after those mammoth reviews of the SW and GK books it's time to turn our attention to Blog Wars again. I apologise for the delay but I'm pleased to announce that tickets are now available for Blog Wars 8. Please see the BW8 page for details of how you can pick up yours.

This will be the first Blog Wars of 7th edition since BW7 occurred only a week after the release of the new rulebook. That means there's a few things we need to discuss. I have an idea of how I'd like to do things but I want your feedback before I finalise the rules pack. Anyway, here goes.

Ticket Price & Venue
Since the first Blog Wars the price of tickets has remained constant at £15. This time around I'm going to increase the price to £17.50. That's partly due to increased costs but also because I intend to offer more prizes for the painting side of things and generally better support there. I still think £17.50 is a good price considering the top prize in the raffle last time was an £85 Imperial Knight and will be something similar this year. Remember entry to the raffle is included in the ticket price and you're also getting 3 games of 40K, lunch, spot prizes and tournament prizes.

I hope the price rise doesn't put anyone off and that people still think the event is worth the money. The venue is again the NWGC in Stockport (see the BW8 page for details).

Army Selection
With 7th edition there is a huge amount of freedom with army selection now and with formations, faction specific detachments and everything else it can be a little overwhelming. Most tournaments organisers have come up with their own rules for how to go about picking an army and I've been reading various event packs to try and decide how I want Blog Wars to work.

There are two important things for me. Firstly, I want to try to minimise the amount of dirty combos that can be created without restricting the ability to created interesting lists too much. Secondly I want things to be pretty simple so that it doesn't take you half an hour to try and work out how your opponent came to this apparently random selection of units and realising what dirty combo he's come up with.

Here's my current solution. This is by no means set in stone and I welcome any and all feedback on it. 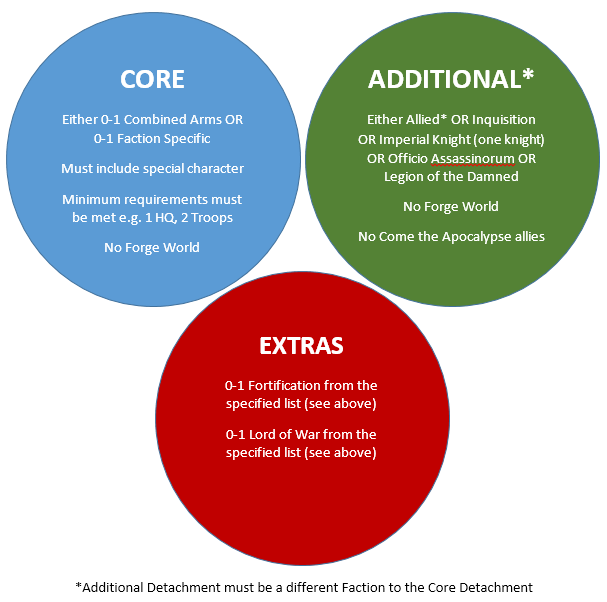 I know that seems like a lot of rules and restrictions but with the open nature of army list selection in 7th I think it's necessary. I'd like to explain my reasoning behind these decisions though.

We've all gotten used to having a Primary and Allied detachment and this is still permitted within this format. I know some will say I'm living in the past or whatever but frankly the system of army selection 7th is horrific and this way makes things a lot easier. It's a massive headache to restrict things like this so I'm certainly not doing it for fun and I wish GW had made things a lot easier for TOs.

It's important to remember that Blog Wars is deliberately different from other tournaments out there. If you want a no holes barred event there are others available. If you want three games in a friendly atmosphere then come along to Blog Wars 8. I appreciate this seems complicated so please comment here or on the BW8 page for clarifications.

I've thought long and hard about all of these decisions and my aim has always been to make the tournament enjoyable for everybody not just those with expensive toys. The super heavies/gargantuan creatures aren't all overpowered but it seems unfair to permit some armies to have them when you've banned the only option from another army. Imperial Knights are a little different but all the same I'll be restricting them to one per army unless I here a compelling argument otherwise. Formations are a tricky one and I'm still not convinced either way. For now I'm not allowing them as to me they seem to be either awesome or terrible with little in between, again compelling arguments are gratefully received.

Psychic Phase and Scenarios
As I've mentioned in the event details I'm limiting warp charge to 12. I'd hope that the Conjuration spam armies wouldn't appear at Blog Wars but a lot of TOs are implementing this restriction and I think it makes a lot of sense.

I've kept the scenarios pretty much the same apart from changing the last mission so that you only start scoring from game turn 2. Hopefully that will make it a little less of an advantage to go first. Of course all units are now scoring in missions 2 and 3 so I've now made Commanders (the Special Character) have the Objective Secured rule.

As ever, I'm open to comments and criticism and indeed I'd love to hear them.
Posted by From The Fang at 16:38:00