As promised this final post, in this increasingly self congratulatory series, will cover points and prizes. I know a lot of this stuff is repetition from last time I wrote about scoring etc but bear with me and hopefully it'll clear up the actually very simple scoring system for those who are going to attend and for anyone else who might be interested. Blog Wars 7 has now sold out but I'm still taking names for reserves just in case, let me know if you're interested. Anyway, here goes.

Scoring
I've never been content to simply run the rulebook missions and play out a win/draw/loss tournament. For me this plain doesn't work as a means of scoring. What you end up with is a bunch of guys on the same W/D/L ratio who don't really know who's winning. Of course, these kinds of tournaments usually have some way of separating those players who've all won 3 out of 3 games. In 5th edition this usually took the form of what was at the time called Victory Points but is now often referred to as Blood Points to avoid confusion (or create more, I'm not sure). Essentially, the overall winner will be the one who decimated his opponents but still also managed to grab a couple of objectives along the way. What it actually comes down to is the guy who tables everyone wins the event.

Now obviously, on paper that sounds pretty reasonable. Wipe all three of your opponents from the table and you ought to be beating the guy who won his games despite losing more of his army than his opponents did. Makes sense. Well, for me at least, not quite. You see the thing that keeps most of us coming back to this game despite numerous apparent attempts by GW to put us off is that there's some depth to it. Why bother with scenarios/missions if you can just ignore them and table your opponent? Those objectives were vital to the mission and you've all but ignored them. The kind of list that does it tends to be pretty boring for both operator and victim too.

Enter 6th edition style Victory Points. Now we've got a way of understanding how well you play the mission. All but one of the rulebook missions awards these new VPs for controlling one or more objectives. Determining the winner is simple then, the guy with the most VPs wins. Blog Wars goes a bit further by increasing the values of these objectives but the point is the same. By recording these directly in each round we can easily see who's scored the most. Even better if we record your opponent's VPs to see just how convincing those victories were. Trouble is, the ugly issue of tabling hasn't been dealt with. Totally annihilate your opponent and you'll still score max VPs. Well strictly speaking and, in fact, RAW that isn't the case. The rulebook states on page 122:

"If one player concedes the battle, or his entire army is wiped out, the game ends and a crushing victory goes to his opponent. Likewise, if at the end of any game turn, one player has no models on the battlefield, his opponent automatically wins."

In case you wondered what a "crushing victory" is, the paragraph above defines it by saying:

"Indeed, if the winner has twice the Victory Points of his opponent, it can be considered a crushing victory!"

That could mean you scored 2 VPs to your opponent's single VP. So then, you win the game then but nowhere (that I can see at least) does the rulebook state that tabling gives maximum VPs. This is something the tournament scene seems to have collectively decided should be the case. Well, as the title of the post says, Blog Wars is different. As you might've read after the controversy of BW6, tabling does not give maximum VPs in the objective missions at Blog Wars. Obviously, in the first mission where you're supposed to try and wipe out your opponent, doing so will give you maximum VPs though.

Now, this isn't a perfect solution. It can lead to a situation where a player deliberately keeps his opponent's units alive so he can get onto the objectives or else encourages a player to throw the game when faced with insurmountable odds. Neither situation appeals to me but I can only trust in the sportmanship of the participants that this kind of thing will be kept to a minimum.

The tabling rules when combined with the tweaked scenarios should hopefully encourage people to approach their list building differently. It's no good having an awesome deathstar if you can't hold the objectives in Control Freak but you'll need more than just tough troops to claim your opponent's objective in Emperor's Relic. I want people to have to think beyond building a list that simply vaporises enemies and grabs the objectives after turn 5.

Will it work though? Unfortunately there's only one way to find out! Perhaps this all sounds a bit naive and I'll be proved wrong by a handful of players who still bring the top tier lists and win. Better to try something different though than keep on flogging the same system that simply doesn't work and expect it to fix itself.

If you're coming to BW7 please take some time to read through the scenarios and scoring section of the event details. Now is the time to ask questions!

Prizes
All this talk about points means I've really got to talk about prizes. The tournament itself will keep the same prize format as at Blog Wars 6: 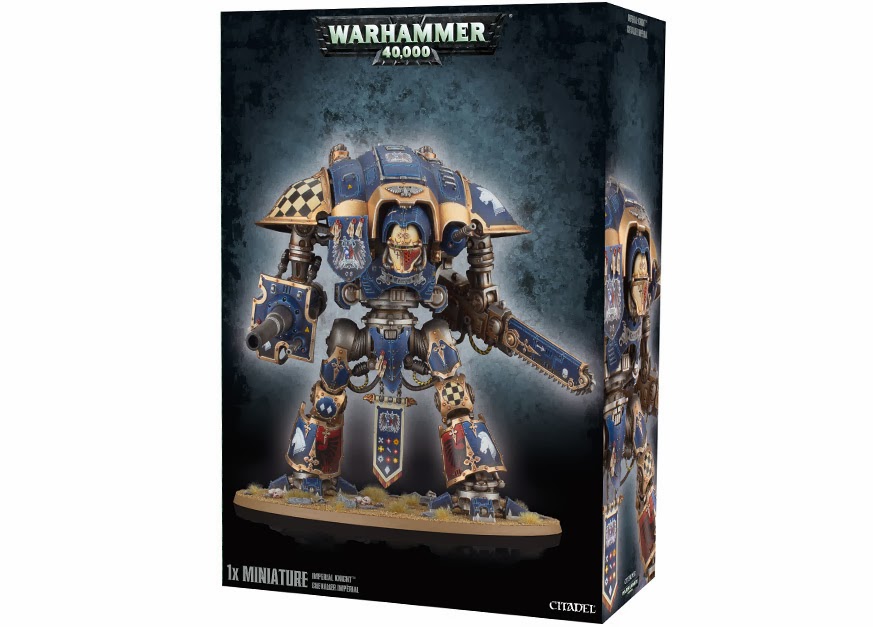 Remember, these figures are effectively increased by the discount available in-store on the day (see Element Games for discounts on individual items). In addition, I'm pleased to announce that Den of Imagination have been kind enough to sponsor the event so there'll be additional prizes for the tournament winners. Here's a shot of what they'll be providing: 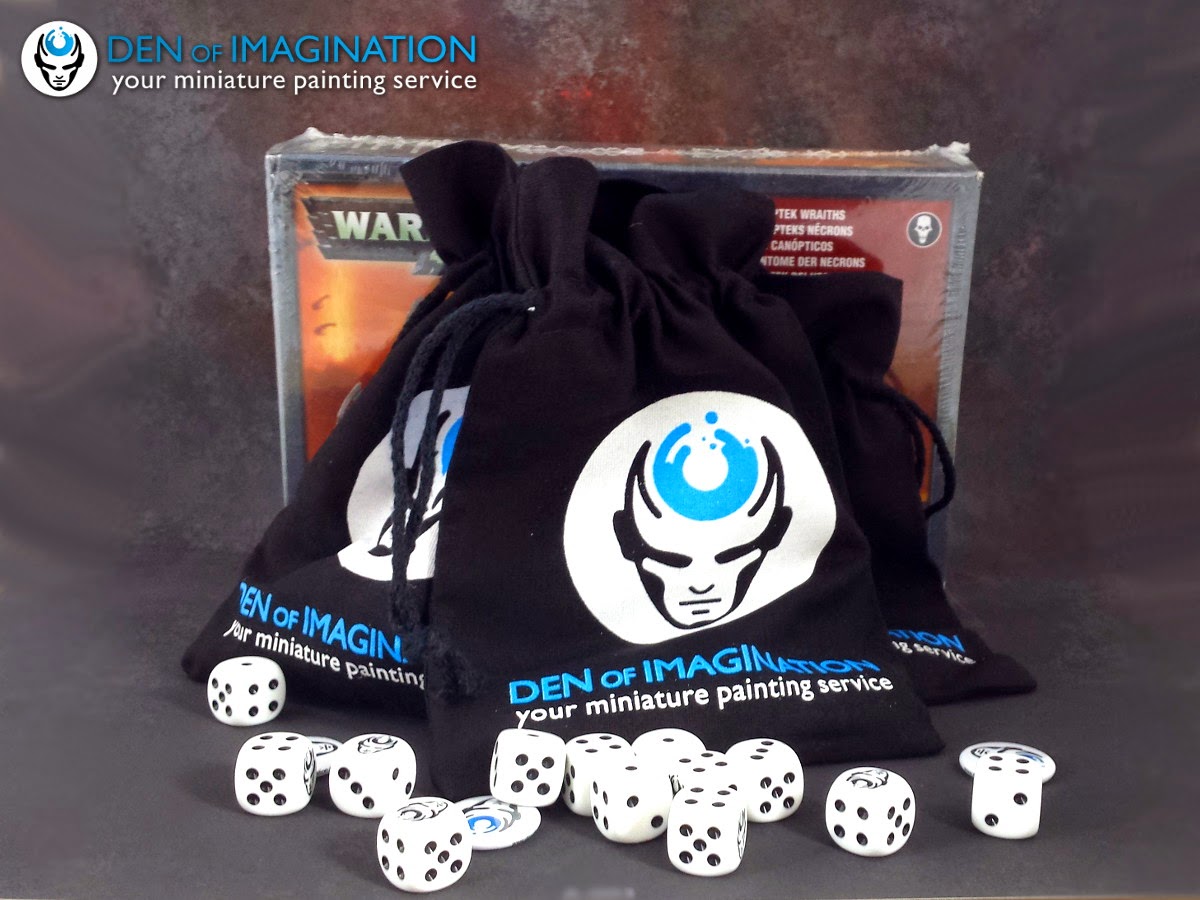 In case you aren't familiar with them they're a Polish company who provide a miniature painting service. Their commissions are tiered so that you can choose the right combination of finish and cost for you. Head over to their website for more examples of their work but here's a shot of some Imperial Fists and also a Chaos centurion conversion they produced which they call a Khorne Gore Engine! 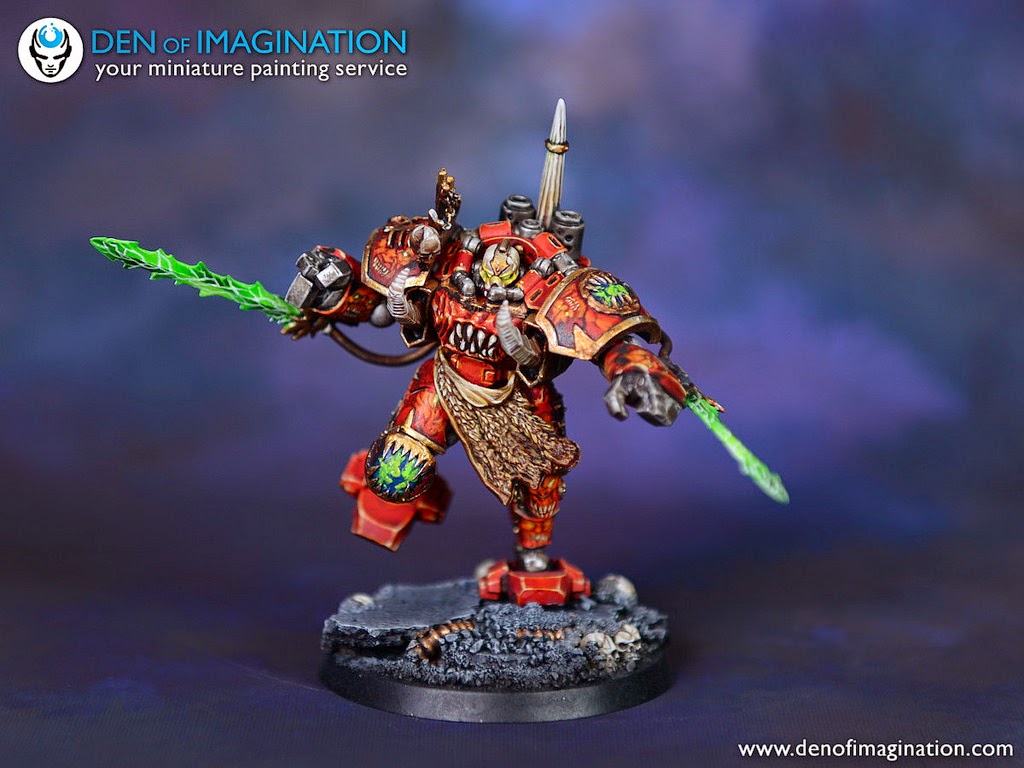 As any veteran will tell you though, the main event is the raffle. Everyone is automatically included in the raffle simply by buying an event ticket. As I've already revealed the top prize will be an Imperial Knight but I won't be revealing the other prizes until closer to the event. All I will say is that with imminent release of 7th edition the prizes will likely be related to that. Rest assured that with such a large number of tickets sold there'll be even better than ever!

Incidentally, it's worth considering placing an order with Element Games to pick up on the day. Whilst they offer free postage on orders over £80 it's still a great idea to place an order for collection on the day to save faffing around waiting for delivery or paying extra for it. Of course their store will be open during BW7 but by putting in an order you can be sure they've got what you need in stock. With the next edition of 40K out soon Blog Wars 7 will be a good opportunity to pick up the new stuff at a discount.
Posted by From The Fang at 17:00:00